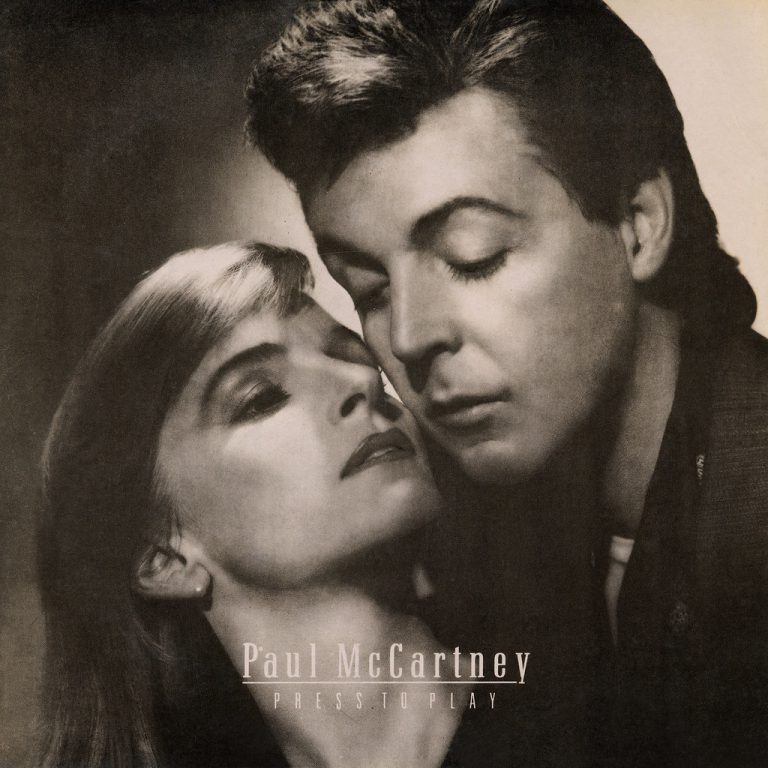 Filming of the “Pipes Of Peace” promotional video

Filming of the “So Bad” promotional video

Filming of the “Ebony And Ivory” promotional video (solo version)

Filming of the “Ebony And Ivory” promotional video (duet version)

‘Pretty Little Head’ was a rather daring, abstract choice for a single, but it was plain from his interviews when Press To Play came out that it was close to Paul’s heart. It was also clear that the lyrics conjured up strong images for him: “I see it as a tribe who live in the hills, who descend from their caves once every blue moon to bring silks and precious stones, so that their princess doesn’t have to worry her pretty little head. What’s kinda nice is that it can also be an ordinary family, and the pretty little head is the kid.”

The video goes for the latter version, though the scenario is much less cosy than suggested above. Compared to the album track, the vocal is clearer, the rhythm heavier and this new power is matched by a (literally) stormy opening scene on screen. A brief extract from ‘She’s Leaving Home’ has prepared us for what follows, as in monochrome a fierce storm rages inside an isolated house by the sea, while husband and wife fight in the kitchen.

Their Pretty Little Head of a daughter rushes upstairs, pulls down her suitcase (brown amid the black-and-white, thanks to ‘colourization’, the process being controversially applied to old Hollywood films) and escapes over the hills, tumbling onto a train. This takes her to a frightening city of concrete and skyscrapers, where ant-like silhouettes attempt to mug her and emerge from a drain and a discarded burger.

Amid the skyscrapers, a giant screen shows a serious Paul, intoning the mysterious lyrics as our heroine evades her tormentors. More benevolent than Orwell’s Big Brother, eventually he leans out from his screen and blows the ‘ants’ to oblivion, enabling her to escape for home. (Very forgiving of Paul, this: when the actress, 16-year-old Gabrielle Anwar, met him, she tripped in her nervousness and knocked him flat!) But… it was all a dream: she wakes to find no storm, only her parents canoodling like young lovers close by.

Even the casual viewer would suspect that much technical wizardry was involved and he/she would be right. The director was Steve Barron, whose credits include A-ha, ZZTop, Michael Jackson (‘Billie Jean’), the Human League (‘Don’t You Want Me’) and David Bowie (‘Underground’), besides a notable film debut with Electric Dreams. He is a contender to direct the title track of Tyne Tees TV’s Sgt. Pepper video album if the project ever gets off the ground. Steve came up with the basic story, which he and Paul then refined until it could be ‘storyboarded out’ for shooting. Playing an important part in realizing their ideas was producer Adam Whittaker.

“We used several locations. The scenes with the girl by the bridge and the river were shot near Settle in North Yorkshire. So was the train going over the viaduct: the line was closed and we had control of the train. The girl looking out to sea and running along the cliffs were done on the Gower Peninsula, near Swansea. It was completed in London, split between Linford House Studios and East Greenwich gasworks.”

“We’d done a fair bit before. It’s very tricky and time-consuming: it has to be done frame-by-frame, so as there are 25 frames per second you can imagine the amount of work involved. The process is done on a machine called a paintbox.”

How long did the making of the video take?

“There were six days’ shooting, on location and in the studio. The editing session was the longest we’ve ever had for a video. There were complicated compositions and superimpositions-for instance, the different elements when the train is going over the bridge: the train, the man on the train, the colourization of the windows. Then, in the hamburger shot, there are the silhouettes, the hand, the girl and the colourization again.

“The frame you see Paul on is computer-generated, which is starting to be more common. It was used in Dire Straits’ ‘Money For Nothing’ video.”

Once again, Paul McCartney has shown the trouble he’s prepared to take over the presentation (as well as the making) of his music, by pooling his own ideas with the best talents and most advanced techniques available. The benefits are plain to see in ‘Pretty Little Head’.