“Unfinished Music No. 1: Two Virgins” by John Lennon and Yoko Ono, released in the US 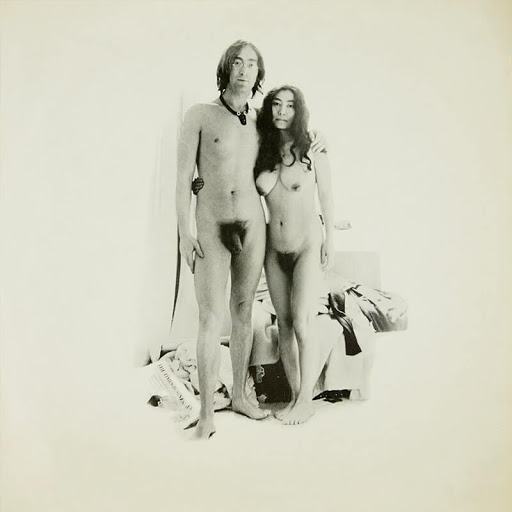 On this day, the first experimental album by John Lennon and Yoko Ono, named “Unfinished Music No. 1: Two Virgins“, was released in the US (it would be released on November 29 in the UK). The album became more famous for its cover, picturing John and Yoko naked, and the controversy it created, than its music.

Paul McCartney contributed the following statement, written on the back cover:

When two great Saints meet, it is a humbling experience. The long battles to prove he was a Saint.

It wasn’t a glamorous picture, it wasn’t a nudie model with elastoplast and clear sellotape holding them up and stuff. It was the real thing: them baring it all to the world. But that was the whole idea with Two Virgins.

I know it was shocking, but I’m not sure whether us lot were too shocked by it — we just knew he’d have a bit of flak. Obviously, the minute the newspapers saw a shot like that, they were going to be on the phone. I knew John was inviting a lot of that. In the end, he’d invited a lot more than they wanted and they started to get busted and things. Quite an oppressive campaign started against them and it probably began with that cover. It’s weird, isn’t it? Our mothers and fathers all had to get naked to conceive us, and yet were still very prudish about nudity, even in this day and age. But John and Yoko were looking at nudity as artists.

[…] I was slightly shocked but, seeing as I wrote a liner note for the sleeve, I obviously wasn’t too uptight.

Paul McCartney – from The Beatles Anthology

January 14th, 1969 (Twickenham Film Studios, London): As the day trudges forth without any productivity for the Beatles’ second day without George in the group, Paul asks John about Two Virgins (under the flippant guise of a journalist) to which John responds with stiff sincerity. As director Michael Lindsay-Hogg comes round to confer, Ringo admits that he isn’t feeling well and wonders about having some rest. Michael commiserates, but expresses concern about the impetus of the group and is worried that they will individually (and indifferently) wander off to their own devices if they don’t have a routine schedule to solder them together as a working band – which prompts John and Ringo to sing a sentimental folk bar. Not being of the disposition to have serious discussions about the direction of the (Get Back/Let It Be) sessions, John, Paul, and Ringo (dis)engage in frivolous wit and references to the Laugh-In.

PAUL: So what’s the point behind Two Virgins? [Yoko laughs]

JOHN: It’s a six-inch nail. [long pause] The main point behind it is to open people’s minds to what’s happening today. There are people all over the country humming into tape recorders, and we hope to bring them out into the open. And hum together. [pause] You understand?

JOHN: Now sold one thousand three hundred due to the great promotion from Apple Dietetics.

YOKO: [laughs] Which is a figure you don’t want to expose, necessarily.

PAUL: Is it very neat to do this in public, Mr. Lennon?

JOHN: I feel obliged, in the position that I am today as a pop idol and the power I have, to do something for the good, and uh, I feel obliged to speak out… [pause] And that’s as simple as I can put it, really. Take Downing Street. South Orderly Street. Wimpole Street. All owned by the Queen. ‘Nuff said. [silence; fidgeting]

MAL: [in background] Is anybody – wanna rehearse, or do songs, or—?

MICHAEL: Do you? Was this a mistake [inaudible]?

JOHN: I think a few days in bed…

RINGO: Yes, I think so too.

JOHN: Or maybe three days on the couch, depending on what your job is.

MICHAEL: Do you really not feel well?

MICHAEL: I don’t feel well, but I can’t say, ‘cause I’m the captain of the ship.

JOHN: Oh you can. [Yoko laughs]

MICHAEL: No, I don’t want to let the crew down.

JOHN: Nowadays, the captain gets off first.

MICHAEL: No, I go down with the ship.

JOHN: No he does, really.

MICHAEL: I feel tired, but I think it’s tiring – disappointing.

MICHAEL: But I have a feeling if we decide not to meet one day, we may never meet again.

JOHN: Along this dusty road…

JOHN: On this dusty road.

PAUL: And still the boom [mic] wasn’t over them.

RINGO: [mock-surprise] I didn’t know that!

JOHN: Didn’t you know that? You weren’t there at the time. [pause] Cleopatra was a carpet manufacturer.

RINGO: I didn’t know that!

JOHN: ‘Cause you weren’t there at the time. [pause] Edgar Allen Poe was a shithouse.

RINGO: I didn’t know that!

YOKO: What was John Lennon?

JOHN: A patriot. [Yoko laughs] I didn’t know that. [laughter]

PAUL: Songs for all functions.