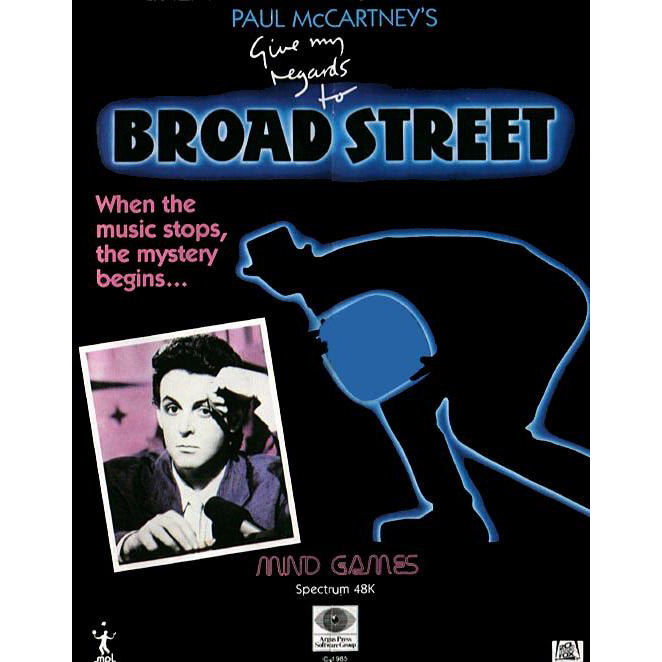 A video game based on the film was released for the Commodore 64 and Sinclair ZX Spectrum home computers in 1985. The game was developed by Argus Press Software and released in their Mind Games series. The C64 version was also published by Mastertronic in the US (Cat. no. ICD-0082).

The game takes place after the action of the film and it is discovered that one track from the album was missing from the recovered tapes. The missing track was also going to be the lead single so without it, the studio is back in jeopardy. The player takes the role of McCartney who must travel around London to track down members of the band and other people who were at the original studio session to help piece the track back together. The game package contained a fold out map of London and profiles of the characters which the player needs to use to predict where to find them.

Players must drive around London in search of band members, each of whom holds a key part of a missing song. Once all band members are found, the player returns to Abbey Road Studios to mix the song, ending the game. Clues as to the band members whereabouts are given in the form of times and tube stations the band members will appear at. Players must be timely, as arriving too early will get the car booted by police. Thugs roam the streets in cars, and smashing into any of them will also result in a reset back to the studio.

Two of McCartney’s songs, “Band on the Run” and “No More Lonely Nights,” appear in the Commodore 64 version. Only the latter is heard in the ZX Spectrum version.

Britain’s Daily Express was somewhat less restrained when the game was launched at the LET computer show in February. “It is stunning!….The game was the hit of the show, and I’m sure it will be one of the biggest computer successes of 1985”. Once the folks at Argus Mind Games had given your reporter a preview, it was easy to see what the fuss was about.

Statistics mount up — seven characters, 48 traffic wardens, 943 scrolling screens — but it’s the demands on your imagination which make the Broad Street game special. “Paul puts a lot of care into his music and we wanted to do the same”, says Argus’ Peter Holme. “He didn’t want ‘shoot-’em-ups’, just a good family game. Strategy games are our speciality, in any case”.

Starting from Abbey Road studios in your battered Ford Prefect, you drive across London in search of Paul, Linda, George, Steve, Ringo, Barbara and Harry, hoping you can get the ten missing notes from them before midnight. You know where they live, their favourite shops, clubs etc. and the nearest tube station to each: tantalized by the strains of an electronic ‘Band On The Run,’ the trick is to guess where each person may be at that time of day.

Fiendish, eh? As Peter says, “Kids can enjoy it just as a driving game”, but for the more ambitious every attempt holds something new. Joystick in hand — very Continental — the player speeds along the famous streets, intent on a scanner map of the immediate area to anticipate corners, not to mention the dreaded meanies. (They’re not blue, though Argus would love the rights to the Yellow Sub. cartoon characters.) These meanies run you off the road, getting faster as the game progresses.

Meet one of the characters and you acquire one to three notes. Danger waits while you check the tube station: a traffic warden may clamp you and (like the meanies) send you back to Abbey Road. The notes you’ve got remain yours, but time is slipping away…

Get all ten by midnight and a final challenge awaits you —a mixing desk with three controls. Mix the tune till it resembles the soundtrack version and you score extra points! If time runs out, up pops busker Paul with a horribly out of tune BOTR.

Besides imagination, the Broad Street computer game involved a good deal of technical wizardry. Available for Commodore 64 and Spectrum 48K, it was programmed by Concept Software of Crosby, near Liverpool. Paul took an active interest throughout and was chuffed that an outfit from his part of the world should be contributing, so I asked Paul Clansey of Concept if he and the others were fans from Beatles days.

“I’m only in my early 20’s, but my mother assures me I used to sing along with my tennis racket!” he laughed, before explaining some of the breakthroughs achieved while working on Broad Street. “It’s the biggest map to go into a computer of this size; the programme uses virtually the whole memory of the Commodore 64. Synchronizing music and pictures required a lot of ‘interrupts’ — a TV picture is updated every fiftieth of a second and we had to do the same”.

How they achieved the first feat remains a closely guarded secret, but Paul C. did reveal that five people spent 2 1/2 months on the proiect, whereas some games can take six to twelve months to devise and programme. The result is something that any McCartney fan or computer buff will leap at.