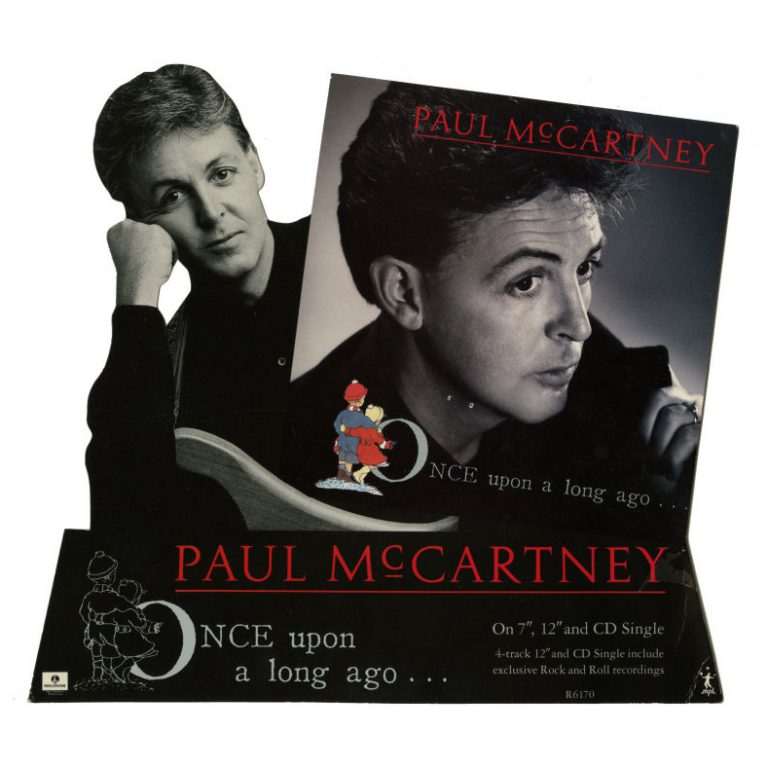 Filming of the “All The Best!” TV ad

Paul had scripted it, then there were a lot of meetings with him and Geoff Dunbar. The cartoon wasn’t finished when we shot the performance footage, but the transfer points from film, to cartoon and back had been agreed before. It was very ambitious to do what Geoff did in the time – he finished it while we were in post-production. The location decided the performance footage.

Mike Ross, co-director of the “Once Upon Along Ago” promotional video, from Club Sandwich N°47/48, Spring 1988

Cartoon time: Dad’s at the reins of a sleigh, wife, son and daughter on board. The children spot a deer; snow falls from the tree onto boy’s head (his sister laughs, as sisters will). Christmas card frosting seems to glisten on the screen.

Back to the group, atop a shaley rock, the camera below their feet. Paul ducks almost to the lens, the sun flashing on his bass. In Christmas card-land, a snow-girt cottage, a puppy, a Christmas pudding and Dad feeding the horse.

For “Counting the bars of an iron cage”, the group are seen behind some. Close-up on Paul singing. For the acapella section, we’re back in the cottage as the family sing along, Dad very Victorian in red waistcoat and floppy bow tie. Outside, two rabbits, a stag and a fawn, a squirrel all listen. A third rabbit bounds up…

Back to Paul, now on guitar, red streaks shooting up the strings. Now he’s wringing its neck high on a rock, the band below and a camera circling above. The keys on Stan’s sax turn gold as he plays. Red streaks shoot from the guitar to Nigel’s fiddle, where they turn blue, colouring his bow and sending globules down the strings. Linda smiles, her gloved hands on the keyboard.

Chris hits the snare and red whirls round the drumskin, which then turns wholly red. Back to Nigel and his blue streaks, then to Paul in (guitar) solo splendour on the rock. Reappearance of old codger, still sending up the magic dust…

So: easy and enjoyable to watch, but how easy to make? First Trevor Jones, Paul’s trusty aide. “We wanted to use a glacier in Norway, but couldn’t because of the weather, so Mike Ross was given a brief to find another astounding location.”

Mike: “I considered the Lake District, but chose the Valley of the Rocks, near Lynmouth in Devon. The Valley was much better as everything we wanted was close at hand, including the sea.”

Shooting was on Friday 16th and Saturday 17th October, just after the famous hurricane. Did the weather cause problems?

Trevor: “It was raining very hard on the first morning from black skies, so there was an indoor shoot at Lynmouth Town Hall, which wasn’t used. Then the skies cleared at 11 o’clock. The wind was gusting at 50 to 60 miles an hour when Paul was on top of Castle Rock – there was a sheer drop 300 feet to the sea on one side. The climb up was overseen by a local mountaineering schoolteacher and two students.”

Mike: “There was a metal ladder roped and secured by pitons. It wasn’t so dangerous on top, being a large natural platform. Paul declined the offer of a safety rope round his ankle, but he did tell the helicopter to back off. The team from Channel 4’s Treasure Hunt did the aerial filming. It was windy, but that was good as it was never cloudy for long.”

What did he shoot at the Town Hall? “An evil-looking, gesticulating judge, to illustrate the line about the House of Lords. If the weather hadn’t cleared, we could have used an image intensifier, as used to film wildlife at night. Paul wanted to try it in the Town Hall while it was gloomy outside.”

The intensifier could have been vital, as Nigel Kennedy was free for the second day only. By then word had spread…

Mike again: “There was a bit of an audience, which was nice for the band. There were about 150, so we lined them up on the side of a hill to keep them in order.”

If the valley was convenient, it also meant some humping, as Trevor Jones relates. “A road passes the bottom of the rocks, but it took 10 to 15 minutes to get to the top. Everyone there carried something: Paul Cox and I both injured knee ligaments.”

Shooting on both days went on till dusk at about 5.30, starting at 7.30 am on the Saturday. Did Trevor find it one of Paul’s trickier video shoots? “It was one of the most hairy, though some of the Broad Street shoots topped it in the uncomfortable stakes – spending all night on Broad Street Station in minus two degrees, for instance.”

How could Paul hear the tape of ‘Once Upon A Long Ago’ up there on the rock? “The crew usually have walkie-talkies,” continued Trevor. “There was a sound man with a walkie-talkie and the tape playing into it. Paul had a walkie-talkie under his lapel, but the helicopter largely drowned it out.”

Was the sun glinting on Paul’s instrument spontaneous, I asked Mike Ross? “No: the camera was positioned so that the sun would shine over Paul’s shoulder.‘

Mike filled in some technical bits: “Adding colour with the paintbox took a long, long time, but tracing it along the strings made it easier. The transfer from guitar to violin was one of the easiest bits. It was my longest video in terms of pre- and post-production.”

Was it the first time he’d blended film and animation? “In a way – we overlaid type on film in a Hue and Cry video. I enjoy incorporating animation or graphics in the editing.”

And who was the old codger, Trevor? “An actor called Fred Evans – we liked his face.” Oh, and the way he swept those sparkles…