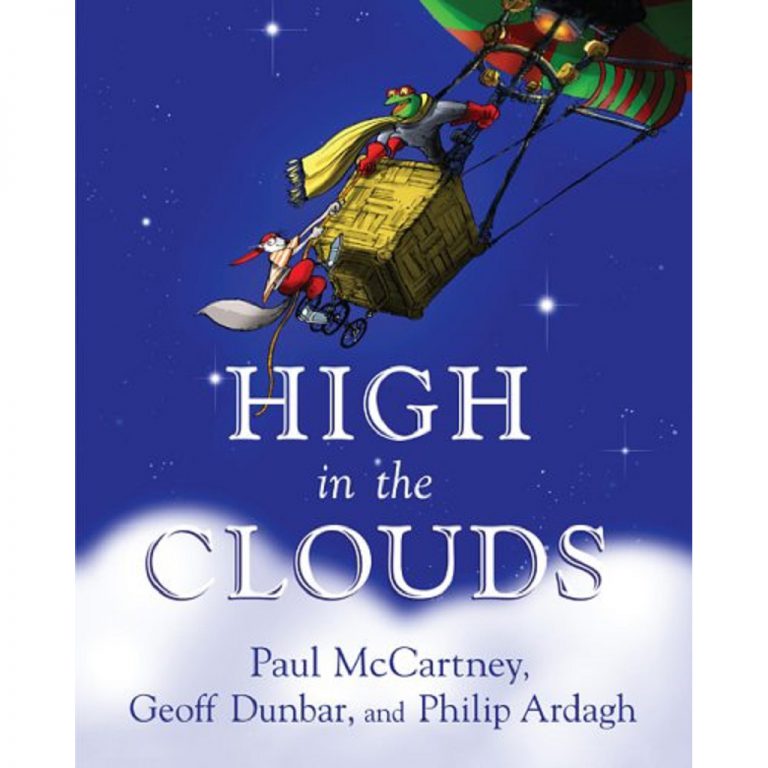 Paul McCartney was at Waterstones, Piccadilly London, book store for a launch event of his children book, “High In The Clouds“.

‘I start by thinking of a bit of the story and then my friend Geoff draws a picture of what it might look like,’ McCartney explained to his audience of children at the book’s launch event in Waterstone’s, Piccadilly, last week. He read the opening section of the story and bravely faced questions from his young readers, whose class had won a competition. ‘He’s famous,‘ hissed a small boy as we waited for him to appear. ‘Is he on telly then?‘ replied his friend.

‘How old were you when you started writing children’s books?‘ asked a little girl. ‘Well, it was 10 years ago, so I was 53,‘ he said. ‘You’d think I’d have got round to it before that, but I was very busy writing songs.‘

‘Where did you get the characters from?‘ asked another. McCartney explained that he just made them up, starting from the fact that the Wirral, where his father lived, rhymes conveniently with squirrel, and that the story was originally intended as a film, but turned out as a book once they had laid out the script and drawings.

‘Is it the real Paul McCartney?‘ whispered my three-year-old son, when his turn came to shake hands.

‘Did you like the story, Paddy?‘ asked Macca. ‘Yes,‘ said my son, ‘but my favourite album is A Hard Day’s Night.‘ Sometimes it can be so hard to shake off the past.

Paul McCartney caused chaos in Waterstones, Piccadilly at a special signing event to launch ‘High In The Clouds’, his new children’s book. Paul read the first chapter to 23 children aged between six and seven, one of his toughest audiences to date! The children had travelled to London from a school in Bromley after winning a competition to meet Paul.

At the end of the reading Paul answered questions that the children had specially prepared for him. Paul then gave books to the hundreds of fans that had been waiting from the early morning for a glimpse of their revered idol. Many fans, who had travelled from all over the world, had spent the evening camped outside the bookstore.

Two fans ran straight off to the nearest Tattoo shop after Paul had autographed their arms! One fan got more than they had bargained for when Paul gave them a piece of his toast along with the copy of the book!

Ten years ago, Paul caused chaos at the Waterstones bookshop in Piccadilly by holding a special signing event to launch his much-loved children’s book ‘High In The Clouds’.

Paul read the first chapter to 23 children aged between six and eight – a tough crowd even in his eyes! After the reading, Paul answered the children’s questions and handed out copies of the book to fans, some of whom had spent the evening camped outside!

We chatted to Paul about his memories from the day:

“I remember one of the kids asking me a question, ‘How old is Wirral?’ And I thought, ‘Hmmm I don’t know!’

“It was a very difficult question! In the movie we are currently working on we’ve got him as a mid-teenager. I think back then though, on that particular day, I thought he was about seven or eight and I think it might have been because the kid asking me was about that age!

“I have since revised my opinion for the forthcoming ‘High in the Clouds’ animation film. So Wirral has grown up a bit – now he’s a teenager!”