Paul McCartney gets his Hollywood Walk of Fame Star 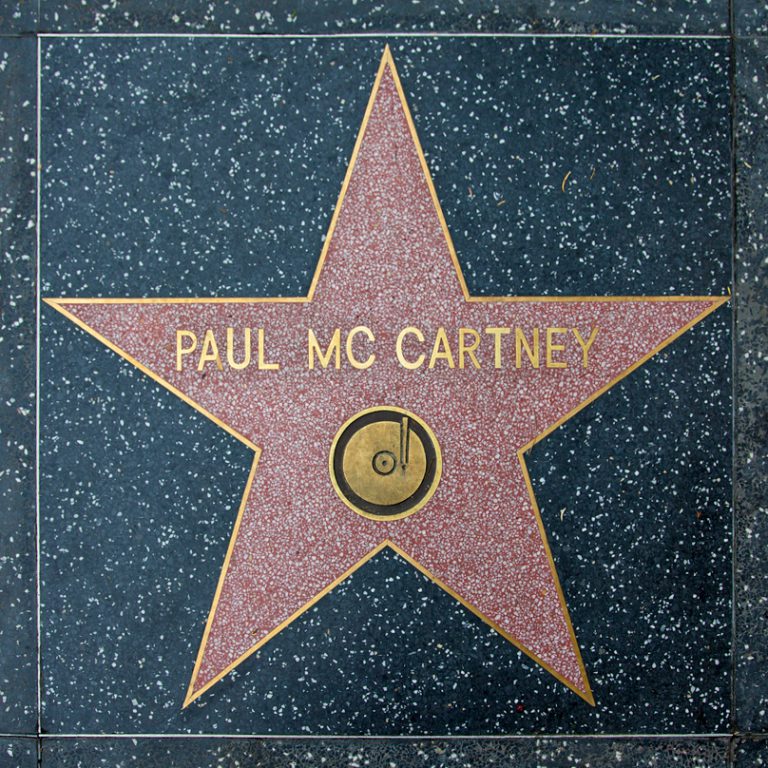 Paul McCartney received his star on the Hollywood Walk of Fame ; he was the last member of the Beatles to receive one (The Beatles as band, Ringo Starr, George Harrison and John Lennon had theirs already). Paul was inducted by Neil Young during a 20 minutes long ceremony, attended by 2,000 people, including Jeff Lynne, Joe Walsh, his wife Nancy and son James.

The Hollywood Walk of Fame comprises more than 2,690 five-pointed terrazzo and brass stars embedded in the sidewalks along 15 blocks of Hollywood Boulevard and three blocks of Vine Street in Hollywood, California. The stars are permanent public monuments to achievement in the entertainment industry, bearing the names of a mix of musicians, actors, directors, producers, musical and theatrical groups, fictional characters, and others. The Walk of Fame is administered by the Hollywood Chamber of Commerce and maintained by the self-financing Hollywood Historic Trust. It is a popular tourist destination, with an estimated 10 million annual visitors in 2010. The Hollywood Chamber of Commerce holds trademark rights to the Hollywood Walk of Fame.

This event was part of a very busy week for Paul McCartney in Los Angeles. As remembered by his publicist Stuart Bell:

Once he touched down in LA, it was quite astonishing what Paul packed into just one week And the coverage? Well, in the space of a week Paul enjoyed the sort of media attention a normal artist could only dream about getting during their entire career. During the trip, Paul was presented with a star on the Hollywood Walk of Fame, performed a special concert which was streamed globally on iTunes, was honoured as the MusiCares Person of the Year (with the likes of Neil Young, Foo Fighters, Coldplay, James Taylor and Katy Perry paying tribute to Paul), won a Grammy and performed twice on the show. The first performance was of ‘My Valentine’ along with Diana Krall, with Joe Walsh on guitar. Then Paul closed the prestigious ceremony with ‘Golden Slumbers’, which ended with an onstage jam with Rusty, Brian, Joe Walsh, Dave Grohl and Bruce Springsteen! A true one-off moment which takes my breath away just remembering it.