Album This song officially appears on the Hope Of Deliverance CD Single.

Timeline This song has been officially released in 1992

Other B-Sides from "Off The Ground" singles

Kicked Around No More

Officially appears on Hope Of Deliverance

Officially appears on Hope Of Deliverance

Officially appears on Off the Ground

Down To The River

Officially appears on Off The Ground

Officially appears on Off the Ground

Keep Coming Back To Love

“Big Boys Bickering” is a song recorded during the sessions for 1993 album “Off The Ground“, released as a B-Side of the “Hope Of Deliverance” single. It is one of the rare protest songs ever recorded by Paul – and one which makes a repeated used of the “f-word”.

In March 1990, Paul and his band performed in Japan, for the first time since his 1980 visit which ended by 10 days in jail for marijuana possession. From the “New World Tour” tour book:

It was hard re-visiting Tokyo after my drugs bust. It was some kind of exorcism. We knew that we had to go there on the tour. The first few nights we had strange dreams and screaming headaches. But while I was there I wrote Big Boys Bickering and for the first time in a song, I used the word ‘fucking’ which I knew would upset some people.

I think it was my first protest song since Give Ireland Back To The Irish. I’ve avoided them, thinking, This is for the politicians, or sometimes, I can say it in interviews. You have to be very incensed to find the inspiration to do it right. I think there’s a bit of John Lennon inspiration in this one. It’s Lennonesque to my mind anyway. John wouldn’t have thought twice about saying ‘fuck’ in a song.

“I’m proud of it. I’m not a teenybopper. I’m an artist. I’ve written serious stuff before and I’m writing it now. You don’t like it, don’t buy it.

I don’t usually use swear words in a song because it can sometimes seem a bit gratuitous, like you’re just trying to shock, but then again I don’t normally go for songs about animal experimentation and when you’re in that hard area these words start to creep in. I’m certainly not a great user of swear words in front of the kids but occasionally – like in ‘Looking For Changes’ – it’s essential to the plot.

The only strange thing is that I haven’t done it before. I mean, I played ‘Big Boys Bickering’, with the “f’ word, to Paul Simon and he said “Have you ever used that word before?” and I said no. But that doesn’t matter – I think I’m allowed to use it once in every 50 years, don’t you? Once in every 50 years I’ll use that word – stick around for the next time.

Paul played the song live during the MTV Up Close concert, but it was logically censored due to its usage of the “f-word”, which created a bit of a buzz orchestrated by Paul’s press officer, Geoff Backer.

If I’m talking about the ozone layer and the big hole in it – 50 miles wide hole – I don’t think “well, that’s a flippin’ hole” I think that’s a fucking big hole

A video was prepared for the track, including some footage from the Up Close performance, mixed with footage of world calamities ; this video was aired on ITV’s Chart Show on January 16th, 1993.

Guess while they're betting on the track,
They're tryin' to win your money back.
All of the taxes that you paid,
Went to fund the masquerade.

We stand here waiting
Underneath the tower block.
Who will win and who will lose?
Which way do the big boys choose?
Which of us will never know what goes on?

Who will win, who will lose?

So while they argue through the night,
Shakin' their sticks of dynamite,
Babies are dying through the day,
They wanna blow us all away. 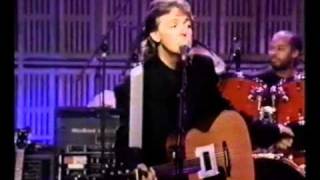 “Big Boys Bickering” has been played in 2 concerts and 1 soundchecks.

Latest concerts where Big Boys Bickering has been played