Timeline This song has been recorded in 1999

“Clean Machine” is an electronic dance song composed by Paul in 1999, to promote the Linda McCartney Racing Team – the song was available on the team website. To be noted that the song contained some sampled bits of Penny Lane.

The team was to compete in Britain before expanding to international events. It was initially composed of British riders with more experienced riders joining later to improve credentials for the UCI World Cup and the Grand Tours.

It was the first British team to ride the Giro d’Italia but the increase in cost as the team and its commitments grew — Linda McCartney Foods did not continue sponsorship — led the team to disband in 2001 with reported debts of more than US$1m and a dispute with the UCI over riders’ wages.

In 2012, a British investigation was launched into the former team, with allegations that the management did not organise doping, but knew several riders used performance-enhancing drugs and turned a blind eye. […]

From The Unknown Paul McCartney And The Avant Garde, by Ian Peel:

[…] Racing around Europe, Linda’s team went from strength to strength after her death and Paul, who was fighting to keep his late wife’s vegetarian campaigning alive, invited them to his Sussex home to find out more. An impromptu tour of his home recording studio ensued at which point the idea of a tie-in song — to attract people to the team’s website — came up.

McCartney went to Abbey Road and came back with ‘Clean Machine’, his first full-on electronic dance track, using a standard four to the floor house drumbeat and pre- set, clichéd bassline. It sounds nothing like anything he had attempted before, or since, The Fireman included. While not exactly a classic of its type, it made it quite clear that, when it comes to the ever-evolving world of music, technology and rhythm, Paul McCartney is determined to try anything at least once. He recorded two versions of ‘Clean Machine’,  the Main Version and — exactly as a young house producer would do for the clubs — a second mix with an extended DJ intro.

If ‘Clean Machine’ had received a full release it would have dumbfounded anyone who heard it. Partly because of the type of music and partly because of who made it. Even as far as McCartney’s non-mainstream works go, it’s a full-frontal experiment in the modern club scene. A website was the perfect place to let such an experiment leak out. “Once the tracks were put on the website, the hits almost doubled,” remembers Stuart Howell. “We had hundreds of site visitors emailing us to say they loved the tracks and asking where they could obtain a copy!” Although the Linda McCartney Pro Cycling Team disbanded in 2001, it remains the most bizarre platform for one of McCartney’s musical ventures to date. 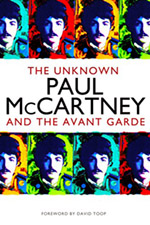 The Unknown Paul McCartney And The Avant Garde

Clean Machine was in a way released. It was posted on the website of the Linda McCartney Pro Cycling Team in 1998.

Thanks Andrew ! I didn't even know that Linda had had a Pro Cycling Team !!! :D