Timeline This song has been officially released in 2001

Interview for The Telegraph

“Freedom” is a song written and recorded by Paul McCartney in response to the September 11 attacks in 2001. McCartney was in New York City at the time of the attacks, and actually witnessed the destruction while sitting in a plane, which was parked on the tarmac at New York’s John F. Kennedy Airport, where he and the rest of his former band The Beatles landed in February 1964.

McCartney, who said the attacks affected him emotionally, wrote the song the day after the attack. In the song, the narrator declares freedom to be a “right given by God” that he will “fight for.” The lyrics were thus in seeming contradiction with the antiwar sentiment associated with McCartney’s former act, The Beatles. But at The Concert for New York City where he first played the song live, McCartney explained to the crowd, “It’s about freedom. That’s one thing these people don’t understand. That’s worth fighting for.” In a later interview McCartney commented, “to me it’s a ‘We Shall Overcome.’ That’s sort of how I wrote it. It’s like, ‘Hey, I’ve got freedom, I’m an immigrant coming to America, give me your huddled masses.’ And that’s what it means to me, is, ‘Don’t mess with my rights, buddy. Because I’m now free.'”

The song was released in two versions: a single billed as a studio version (recorded in Quad Studios, New York), and a hidden track on McCartney’s Driving Rain album billed as a live version. It appeared “hidden” because McCartney halted the pressing of the album to include the track at the last minute, and the artwork had already been completed. Both versions feature Eric Clapton on lead guitar, with McCartney’s touring band backing him. The live, album version also featured studio overdubs from the sessions that produced the single version.

The single reached #97 in the Billboard Hot 100 and #20 in the Billboard Adult Contemporary chart. All profits went to the Robin Hood Foundation, to aid the families of New York firemen and police. In the UK, “Freedom” was added to the single “From a Lover to a Friend“, which was released just a week before, but it was not listed on the UK Singles Chart. It has also charted at 61 in the Romanian Top 100.

The song was also featured at the Super Bowl XXXVI pregame show, with a Statue of Liberty tapestry rising up in the background as a tribute to the victims of 9/11.

McCartney performed the song on his 2002 Driving USA Tour and it appeared on the live album Back in the U.S. However, he chose not to perform it on subsequent tours, such as his 2005 The ‘US’ Tour, as he felt the song had acquired a militaristic meaning with the Bush administration’s Operation Iraqi Freedom. In an interview, McCartney stated: “And I thought it was a great sentiment, and immediately post-9/11, I thought it was the right sentiment. But it got hijacked. And it got a bit of a militaristic meaning attached itself to it, and you found Mr. Bush using that kind of idea rather a lot in [a way] I felt altered the meaning of the song.”

All songs written and composed by Paul McCartney. 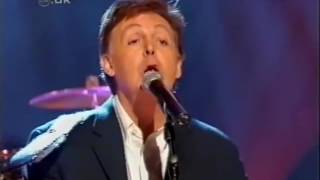 “Freedom” has been played in 54 concerts and 1 soundchecks.

Latest concerts where Freedom has been played

See all concerts where “Freedom” has been played

Quite interesting, but uhhh hey, what's that you're doing? What are your sources for the citations?