Album This song officially appears on the Better In Blak Official album.

One afternoon last year, Thelma Plum got a text. It was from the producer David Kahne, who was in the studio in New York where the pair were working on her debut album, and it said, “You’ll never guess what happened.”

Another artist in the studio had wandered past, overheard Plum’s Paul Kelly-featuring song Made For You, and asked if he could “lay something down”, explaining: “I’ve got this part that I can hear.”

It would be a bit of an overstep unless you were, say, a Beatle. So that’s how a song that was already a career bucket-list item for a Paul Kelly superfan also scored a guest appearance by Paul McCartney on guitar.

“I definitely didn’t guess that,” Plum deadpans, eyes wide. “It’s this beautiful, simple guitar line. It was so perfect for the song. And also, just how cool – I can probably die now because the two Pauls have been a part of this song.”

“Paul McCartney came to the studio to pick something up after I’d gone one night and David had Made for You on in the background on a loop and McCartney asked who it was,” Plum says. “He said, ‘It’s this Aboriginal woman from Australia named Thelma Plum and she wrote it with Paul Kelly,’ and McCartney knew who Paul Kelly was and he said, ‘This is beautiful, do you mind if I lay some guitar down?’ And David’s like, ‘I don’t think Thelma will mind,’ which I didn’t!”

Plum didn’t find out what happened until the next day, although she admits if Kahne had told her at the time she would have got out of bed and run across the Brooklyn Bridge to the studio.

The writing credit on Made for You now reads Thelma Plum/Paul Kelly/Paul McCartney, and when the latter toured Australia in December 2017 he invited Plum and her family to a show and met her beforehand.

Plum thanked him for his contribution and McCartney told her: “No worries, it’s a great song.” 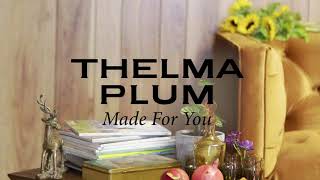