More I Cannot Wish You

Morse Moose And The Grey Goose

“More I Cannot Wish You” is a 1950 song written by Frank Loesser for the theatre production of Guys And Dolls. Paul McCartney covered it on his 2012 album “Kisses On The Bottom“.

Some of the songs we’ve done on the album are songs that I didn’t know. Like, “More I Cannot Wish You”, is actually from the stage show Guys And Dolls; it didn’t make the film. But I thought it was such a poignant little song. And what totally did my head in is, it’s a guy, the grandfather, singing to a young girl. With me having a young daughter it’s very poignant.

Paul McCartney – from the “Kisses On The Bottom” liner notes

The first thing I heard was a cast recording of Guys And Dolls from the stage show. It’s a beautiful song – he’s singing, ‘Mansions, I can wish you/Seven footmen in a row/And calling cards upon a silver tray/But more I cannot wish you than you find your own true love.’

So it’s like, ‘I can wish you all this great stuff but, you know, really what I’m wishing is you find love.’ So, for that, for a father to a daughter – and particularly with me, having an eight-year-old – some of it was quite moving. The whole thing was very moving.

And then, when he says, ‘Music, I can wish you/And merry music while you’re young/And wisdom, wisdom when your hair has turned to grey.’ Well me thinking about my eight-year-old, with her hair turning to grey, did me in!

And then Jonny Mandel came in to do some of the arrangements, and he did that one beautifully, very simply. ’cause he doesn’t even come in with his arrangement till it says ‘Music I can wish you,’ and there’s this beautiful Mandel string thing that happens, that really just adds to the emotion.

We all went in with a bit of trepidation as to whether or not it was going to work out, and ‘More I Cannot Wish You’ was probably the breakthrough. That, I think, was the song that gave Paul a sense as to how he should approach this material. It was the second thing we did after ‘Cheek To Cheek’. We didn’t immediately think, ‘This is not working,’ but we all sort of knew it, and then the minute we got to ‘More I Cannot Wish You’, he found this spot where he was comfortable with his voice, and that sort of broke the ice and got us going.

Frank Loesser’s ‘More I Cannot Wish You’ wasn’t in the movie version of Guys And Dolls, it was in the Broadway show, and when I heard the original soundtrack album, it really touched me. It’s just beautiful, and it also rang some bells in Paul because he’s got a young daughter and the song’s lyrics are like he’s giving her advice. Then again, it just so happened that there was a Frank Loesser centennial concert that Paul invited me to, and while a lot of Broadway vocalists sang the Loesser songs, ‘The Inch Worm’ was performed by the Muppets. I was familiar with that number from Danny Kaye’s performance of it in [the 1952 film] Hans Christian Andersen, and I had also done it with another artist many, many years ago. So, a few days after I heard the Muppets do it, I told Paul, ‘Gee, we should give it a shot. It’s a great song, let’s see what we can do with it,’ and he agreed.

Velvet, I can wish you,
For the collar of your coat,
And fortune smiling all along your way,
But more I cannot wish you,
Than to wish you find your love,
Your own true love, this day.

Mansions, I can wish you,
Seven footmen all in red,
And calling cards upon a silver tray,
But more I cannot wish you,
Than to wish you find your love,
Your own true love, this day.

Music, I can wish you,
Merry music while you're young,
And wisdom, when your hair has turned to gray,
But more I cannot wish you,
Than to wish you find your love,
Your own true love, this day.

With a sheepish eye,
And a look of the truth
And the strong arms,
To carry you away 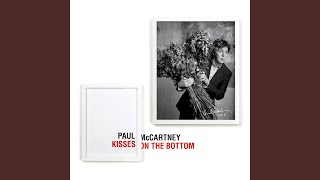 “More I Cannot Wish You” has been played in 1 concerts.

Latest concerts where More I Cannot Wish You has been played

I am curious. This article does not address the changing of Loesser's lyrics, "With the sheep's eye / And the lickerish tooth". Can someone comment on this?