Album This song officially appears on the Press To Play Official album.

Timeline This song has been officially released in 1986

“Press” is a song by Paul McCartney. It was released as a lead single from his sixth studio solo album, Press to Play, being McCartney’s 37th single. The single features the non-album track, “It’s Not True” as the B-side, which was also released as a bonus track on compact disc release of the album.

Though hitting the Top 30 in both the US (number 21, for 8 weeks) and the UK (#25), “Press” marked the beginning of a downturn of McCartney’s fortunes on the singles charts, as it was the first time since Back to the Egg in 1979 that a lead single from a McCartney album failed to hit the Top 20 in the US/UK. This may have been because “Press” did not fit neatly into album-oriented rock or adult-contemporary radio formats popular at the time.

Various issues in the UK include two 7″ singles (“Press” and “Press-video edit“), a 10″ single in a special fold-out sleeve and two 12” singles.

The 1986 music video for Press was shot entirely in the London Underground. Paul McCartney sings the song as he takes the Tube from South Kensington to Piccadilly Circus. As he takes the escalator to the platform and boards a Tube train, he begins singing the track. The video continues with scenes from around the Underground. These include shots of various commuters and buskers, featuring an accordionist and a violinist. McCartney interacts with members of the general public aboard the train and in the station, signing autographs, accepting a kiss from a female fan and leaving a tip for the violinist. In the final shot, he is seen riding the escalator up out of the Underground.

Writing for AllMusic, critic Stephen Thomas Erlewine stated that the track “is a terrific mid-’80s drum machine-driven slice of synth-pop, utterly featherweight in the best possible way.” and writing for Los Angeles Times, critic Terry Atkinson stated that the track “is a sprightly, sunny delight–one of the most playful, positive pop songs ever written about the joy of sex and its link with love.“

“I actually played the guitar solo… Carlos played arpeggio guitar…which really pulled the track together… ‘Oklahoma was never like this’. That can mean whatever you want it to mean… It’s a symbol for the provinces, the sticks, the out of the way places. The line just wouldn’t change“. The other lyrics include a subtle update of Gary Glitter’s ‘Do You Wanna Touch Me‘ (‘Right there, that’s it. Yes.‘)”, the music is entirely infectious and there’s a good, unpretentious video to boot.

Oklahoma was never like this’. That can mean whatever you want it to mean. To me, when you’re writing songs, you often get a line you assume you’re going to edit later, you’re going to knock it out and put something sensible in. But every time I came to that line, I couldn’t sing anything else – just the scanning, the way it sang. People would have understood it if it was ‘Liverpool was never like this’, but it wouldn’t have sung the same. It’s a symbol for the provinces, the sticks, the out of the way places. The line just wouldn’t change, and when you meet such resistance from the lyrics themselves, you have to give in.

Some of the tracks are completely live-with real people! But the bass on ‘Press’, for example, that’s a machine playing it. (On McCartney II I was) familiarising myself with… noise gates, synthesisers, sequencers…Once you understand it, it’s not difficult at alt-it’s like someone talking about a carburettor when there were blacksmiths… We did have a lot of these gimmicks to play around with, and sometimes they are more trouble than they’re worth, but occasionally you crack it and go ‘Oh, I haven’t heard that before!’

Darling, I love you very, very, very much,
And I really am relying on your touch.
But with all these people listening in,
I don't know where I ought to begin.
Maybe we could hit upon a word,
Something that the others haven't heard,
When you want me to love you,
Just tell me to press.

Right there, that's it. Yes. When you feel the stress,
Don't just stand there, tell me to press.

Darling, I know it really wouldn't be a crime,
If I say I want to love you all the time.
But with all these people listening in,
I don't know where I ought to begin.
Maybe we should have a secret code,
Before we both get ready to explode.
When you want me to love you,
Just tell me to press. Press…

Right there, that's it. Yes.
When you feel the stress,
Don't just stand there.
Won't you tell me to press? 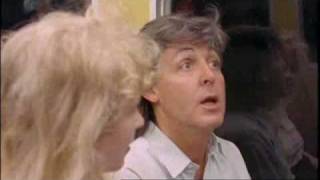