Wings departs for their University Tour 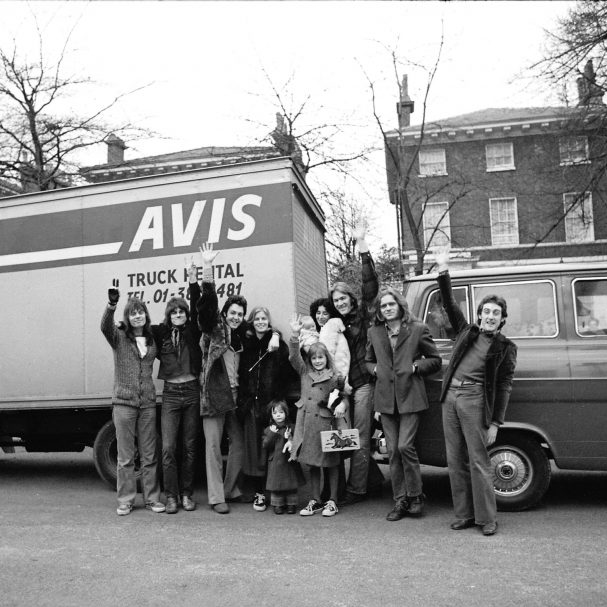 On this day, Wings departed for their unscheduled University Tour. Paul McCartney was realizing an idea he had in mind since September 1969 – get back on the road, doing small concerts:

I’d said: ‘I think we should go back to little gigs – I really think we’re a great little band. We should find our basic roots, and then who knows what will happen? We may want to fold after that, or we may really think we’ve still got it.’ John looked at me in the eye and said: ‘Well, I think you’re daft. I wasn’t going to tell you till we signed the Capitol deal’ – Klein was trying to get us to sign a new deal with the record company – ‘but I’m leaving the group!’ We paled visibly and our jaws slackened a bit.

Paul McCartney – From The Beatles Anthology, 2000

Paul, Linda, their three daughters (Heather, Mary and Stella), Denny Laine, Denny Seiwell and his wife Monique, Henry McCullough and pets were in one van. Roadies (and brothers-in-law) Ian Horn and Trevor Jones were in another with all the equipment.

On the day we left, I showed up at Cavendish [Paul McCartney’s home in London], leaving my wife, Monique, at home in bed. Then Paul goes, ‘Where’s Monique? She’s supposed to come along, too.’ It was going to be a real family thing.

Denny Seiwell – From “Paul McCartney: The Biography” by Philip Norman

“I’ll never forget Paul said, ‘Yeah, come on up to the house tomorrow and we’re going to go on tour,’” says Seiwell. “’What? So, you know, I throw a couple of t-shirts, couple of jeans in a bag and and head up to the house. Now we get up to the house and there’s a truck and a 12-passenger van in front of the house.” He said Paul then asked Seiwell why his wife, Monique, with whom Seiwell celebrated his 52nd anniversary in November, wasn’t there. “’Well, she’s at home. She’s not coming along,’” he told McCartney. “He says, ‘Oh, yes she is’ and so he picks up the phone and he calls Monique and he says, ‘Pack a bag and get up here as soon as you can’,” Seiwell recalls.

The reason why we took the kids on the road is basically because we loved them. And the idea of leaving them with a nanny, a baby sitter or in a boarding school or however you otherwise would have done it was abbhorant to us. We didn’t fancy it. We just thought “we’ll have them with us, so if anything goes wrong, a little cold, a little fever like kids do, we’ll be there. It will be good for them and for us”.

Paul McCartney – From “Band on the Run – The Story of Wings” radio program on BBC Radio2, October 2001

They gathered on the pavement for one last photograph before leaving. Out in the road at the front of the Cavendish Avenue house they stood, a scruffy assemblage of longhairs. At its center were the McCartneys and their daughters, along with the Seiwells — Denny’s wife, Monique, holding baby Stella. To their right were brother-in-law roadies Ian Horne and Trevor Jones. To their left, McCullough and Laine, the latter pulling a comically vacant Stan Laurel face. Behind them stood a green Transit van and an Avis rental three-ton lorry stuffed with their equipment.

Excerpt from “Man On The Run” by Tom Doyle

At 2 pm, they left Paul’s house in Cavendish Avenue, London, and drove north of London on the M1 motorway. They left the M1 at Hatherton, taking the direction of Ashby de la Zouch, in the Leicestershire, and finally ended up in Nottingham.

We got a band and hatched the plan of the university tour. Didn’t want to have a big supergroup, just wanted to try and learn the whole thing again, hopefully learn some new things rather than repeat the Beatles. Which has been about as successful as anyone in the world was ever gonna get with anything. The theory was that by going out and looking at the whole deal again, you might get a few new clues. So we literally took off in a van up the M1 , got to Ashby-de-la-Zouch [in Leicestershire], liked the name. Great! Turn Off here. But there wasn’t a gig, just a little village. It was a signpost. We kept going until we got to Nottingham University, and then it suddenly hit. “Ah, let’s do universities”. Otherwise there weren’t any gigs. That’s a captive audience. There’s people.

We decided we’d just go on the road with no plans; no hotels booked, no gigs booked a complete blank canvas. So we set off with the band, the family, the dogs, the babies – up the motorway. We headed north and saw a sign that said Ashby de la Zouch so we got off the motorway there and asked where the nearest uni was. This became the idea that the only place we could maybe find a captive audience would be somewhere like a uni, so we were directed to Nottingham Uni and that’s how we found it.

We got a van, we got our dogs, the kids, all the group and a couple of guitars in the van. A van followed with two roadies and all the equipment and we just drove up the motorway, which was the M1. You go north, don’t you? How does you go looking for gigs? You go north. So we did. No plans, no gigs booked, which is insane really. Cause even bands that are starting have managed to get a couple of bookings, you know. So we didn’t have that. We just.. “Hey, hey, off we go”. We turned off the motorway and go to what we thought to be a likely looking place, Ashby De La Zouche. Well, that’s a kind of exotic name to find in Britain. Still don’t know what it means. What is a La Zouche? Don’t ask. Anyway, so we asked: have you got a university there? Cause that was the plan. We’d go around universities where we know there were lots of young people and would say “do you have us to play for you?” The University Tour! But Ashby De La Zouche said, “no, we don’t have any university”. So we kept going and we went to Nottingham, where they said, “yes we have”. So, one of the roadies went in the Student’s Union Headquarters, who said “We got Paul McCartney in the van, he would like to play for you with his band, tomorrow”. The guys said “pull the other one”. We eventually persuaded him to come out to the van and there were eyes like… “Hello, would you like us to play for you?” “Yeah, alright”. So we said, we’ll come back tomorrow at noon, and we’ll charge 50p. It wasn’t a lot. And the thing is this is what we wanted. With Wings, the idea was to try and do something different.

Paul McCartney – From “Band on the Run – The Story of Wings” radio program on BBC Radio2, October 2001

To give you a taste of what it was like, we would look at a map and say, ‘Ashby-de-la-Zouch . . we like the sound of that. So we drove there, and no offence to the people of Ashby-de-la-Zouch, but it didn’t seem like much more than a signpost.

Then we discovered that Nottingham University was nearby so we showed up there. Our roadie went up to the bar and said, ‘I’ve got Paul McCartney in the car park, wondering if he can do a gig’. The guy said ‘pull the other one’ before being convinced to come out to the car park. I’d be there waving out of an old van.

Paul McCartney – Interview by Will Hodgkinson of The Times, October 2010

They arrived at Nottingham University around 5 pm, and Trevor Jones was sent off to check the location. At the union bar, he met with Elaine Woodhams, the Students’ Union social secretary at the time:

[Elaine] was in her final year studying Social Administration and was responsible – along with the committee – for booking the entertainment for the Portland Building.

“That night, I was in the bar when I was approached by a guy,” she remembers.

“He said ‘we’re with Paul McCartney’s new band, Wings, and we’re on the road looking for places to do impromptu gigs. Are you interested?’ First thing I thought was that someone was winding me up, but I said ‘of course we’re interested’.

“He said ‘if you’d like to come outside and meet the boss and talk about the details’. I followed him outside, there was a red minibus parked in front of the Portland Building. He knocked on the window and the door slid back and who should be sitting in the driving seat but Paul McCartney. My first impression was: wow! I’d actually thought that when I got outside the building I might be greeted by lots of people laughing or throwing buckets of cold water at me. Then I think I did the goldfish impression for a bit. Paul said: ‘My man tells me you’re up for it so let’s talk about the details. He said ‘what’s the chance of playing  the next evening’ and I explained that I would have to get permission from the Registrar.”

McCartney told Elaine that the band would stay in Nottingham that night and to organise it and give him a ring. He wanted it to be low-key event, no publicity, just a blackboard up in the bar with the details.

“Word went round like wildfire, just from the blackboard notice in the bar’, said Elaine. “The fire limit on the ballroom was 800 and it was definitely packed. It was amazing”.

It was a big deal for them. But it was a bigger deal for us. It was, like, ‘This is it, the first fucking gig… let’s see what happens.

Henry McCullough – From “Man On The Run” by Tom Doyle

In 2011, Elaine Woodhams and Henry McCullough returned to The University of Nottingham, to remember this concert:

Wings stayed at the Forest Hotel in Nottingham for the night and would play their very first gig the day after, at lunchtime. Linda McCartney summarized the day in her diary: