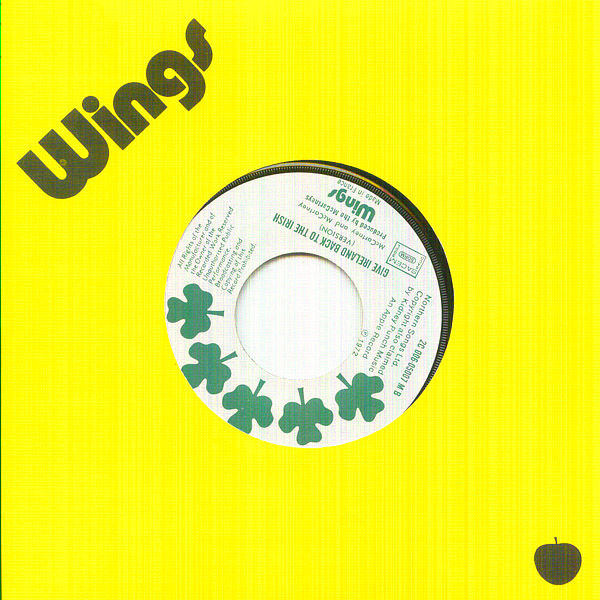 Officially appears on Give Ireland Back To The Irish

On January 30, 1972, British soldiers shot 26 unarmed civilians during a protest march in Derry, Northern Ireland. Paul McCartney decided to react by writing and recording a protect song, “Give Ireland Back To The Irish“, in early February.

The track was planned to be issued as Wings’ first non-album single, on February 25.

On this day, February 10, while Paul and Wings were in York for the second concert of their University Tour, the BBC and Radio Luxembourg decided to ban the song, due to its political nature.

The BBC banned political songs, including “Give Ireland Back To The Irish” by Paul McCartney and Wings, because the mention of the title implied the station had a political position on Northern Ireland… The banning meant that the name of the song, which occupied a high position on a weekly list of best-selling songs, had to be omitted by any disc jockey. He or she would merely state that position ‘x’ on the list was occupied by an unspecified Paul McCartney song.

We will not be playing this record, because we feel the lyrics adopt a definite standpoint on the Northern Ireland situation and are therefore politically controversial.

As a citizen of the UK, Paul feels a mistake is being made in Ulster. He is not a politician, but believes the majority of British and Irish people think Ireland should be given back to the Irish. Paul is very patriotic and loves Britain and this is his personal view. He and his wife have dedicated the single to Mr. Heath. Paul has not been informed about the ban as he is on tour in Britain, and nobody knows exactly where.

A spokesman to Paul McCartney – From Maccazine – Volume 47, Issue 1 – The birth of Wings

This song is not anti-British and does not incite violence. The lyrics represent a comment from Paul McCartney. As an international company, EMI holds no political views and is issuing the record in the usual way. Opinions expressed by Paul McCartney may not necessarily be those of the other three Beatles or those by Apple.

Statement from EMI Records – From Maccazine – Volume 47, Issue 1 – The birth of Wings

“Give Ireland Back to the Irish” was written after Bloody Sunday. British soldiers had fired at a crowd of demonstrators and there were deaths. From our point of view, looking at it on the TV news, it was the first time people questioned what we were doing in Ireland. lt was so shocking. I wasn’t really into protest songs – John had done that – but this time I felt that I had to write something, to use my art to protest. I wrote Give Ireland Back to the Irish, we recorded it and I was promptly phoned by the chairman of EMI, Sir Joseph Lockwood, explaining that they wouldn’t release it. He thought it was too inflammatory. I told him that I felt strongly about it and that they had to release it, and he said, ‘Well, it’ll be banned’. And of course it was – the BBC could not play it. But it was number one in Ireland, and in Spain for some reason. It was just on of those things you have to do in life because you believe in the cause. And protest was in the context of the times.

A PROTEST song written by former Beatle Paul McCartney, calling for British troops to get out of Northern Ireland, has been banned by the BBC.

The song, called “Give Ireland Back to the Irish,” was written by McCartney two days after 13 people were shot dead on Londonderry’s “Bloody Sunday.”

After hearing of the ban, the Apple Corporation, which releases all the Beatles’ records, tried to buy time on commercial television to promote the record, using film of Paul McCartney.

The Independent Television Authority said that it had banned advertisements for the song because it contained “political controversy” not allowed by the ITA Act.

Radio Luxemburg also banned the song. A spokesman said the disc was obviously “politically biased” and Radio Luxembourg would not get involved.

The song is recorded by McCartney’s new group “Wings” with him singing and his wife playing the organ. The record is due to be released by Apple on Friday next week.

McCartney claims that the song is “patriotic” to Britain, but says that Ireland should be made Irish immediately.

BBC has put a total ban on the protest song. A spokesman said: “We have decided not to play the record because we feel the lyrics adopt a definite standpoint on the Northern Ireland situation and are therefore clearly politically controversial.“

It is unusual for the BBC to put complete ban on a record. Usually, an offensive record is banished to off-peak listening.

The former Beatle said: “It is my personal opinion as British citizen. Much as I love Britain, I feel that a mistake is being made in Ulster. It seems to me that the majority of Irish and British feel Ireland should be given back to the Irish.“

The lyric is the copyright of Northern Songs. In one part, McCartney says: “Great Britain you are tremendous and nobody knows like me, but really what are we doing in that land across the sea?“

At the end of each verse, McCartney calls on the British to “Give Ireland back to the Irish.“

B-side is an instrumental version and the single is on Apple priced 50p and carrying a special shamrock label design.

The BBC told Disc that a ban on the song, which calls for British troops to leave Ireland, is unlikely, although they haven’t yet received copies of the single.

“We have banned seven records since 1964. We won’t ban this one unless we have to,” said a spokesman.

Does the BBC ban of Wings’ ‘Irish’ raise the question of Freedom of Song?

WITH THE BBC still refusing to play ‘Give Ireland Back To The Irish’ by Wings, even though it has now made the Top Twenty, I think it is time that their motives behind this ban were queried.

What the BBC are really saying is that this song is contrary to the view they think should be expressed and therefore they will not play it.

Whether or not you agree with the sentiments of this record, we are supposed to be living in a free, democratic country, and that means freedom to speak, sing and play any song we choose without any interference from self-appointed censors – IAN ABRAHAMS. 305 Halfway Street, Sidcup, Kent. DA15 8DP.

but not everyone agrees with Paul

What a shrewd fellow Paul McCartney is! After a dismal chart rating with his last single ‘Back Seat Of My Car’ he has now recorded a number which he knew would be banned. The gimmick value of ‘Give Ireland Back To The Irish’ should be sufficient to give Wings a top five hit, but doesn’t the music matter to Paul and his friends anymore? – STEVE KIRKHAM, 36 Orchard Meadow Walk, Castle Vale, Birmingham 35 7LU

So McCartney has been banned for his new record and a good thing too. I would have thought he’d made enough money without cashing in on other people’s mishaps. If he knows so much about Ireland, let him join the army for six months and see if he still holds he same beliefs. We’ve done two years out there and earnt every penny we got. I wonder if McCartney can say the same? 24089357 L/Cpl. BARKER, ACC Attchd 1st Royal Anglians, Salamanga Bks, BFPO 53. […]

AFTER a prolonged period of dormancy it looks as though Paul McCartney is climbing back into the controversy ring. This week his first single with his new group Wings, Give Ireland Back To The Irish, was banned by not only the BBC but also the ITA and Radio Luxembourg. So no matter how big a hit it becomes and those who know think it may well be a monster, you’re only going to hear it in this country if you go out and buy a copy. Apparently, all the broadcasting authorities thought the lyrics were provocative McCartney for his part is taking his new setback with an uncharacteristic phlegm. Says he: “I think the BBC should be highly praised for guarding our youth against the contaminating effect of my opinion.” Adding as an afterthought. “Up ’em!”

Paul, somebody wants you

IT SEEMS it’s not true that “Give Ireland Back To The Irish” has been banned by all the television networks.

“Today,” Thames TV’s daily magazine programme, has been after McCartney for the past five weeks in the hope that he would appear to discuss points arising from the single. Dave Clark, a researcher for the programme, says they’re quite willing to play the single: “We know that McCartney wanted to put an ad on the channel and this was refused by our commercial department. But our legal department has heard it and they’re satisfied there’s no harmful content as regards playing it. Many people concerned with ‘Today’ were keen to have Paul, but we’ve had no joy in getting in touch with him. We’ve tried every means. We’d just like to point out that he’s not been banned by Thames. And we feel he should never have been banned by the BBC.”