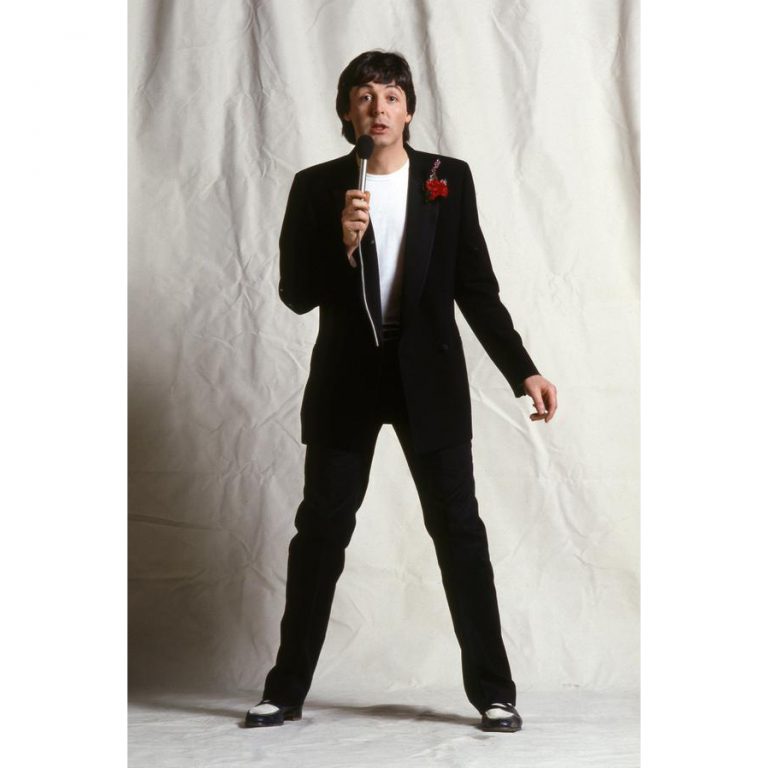 The music video for “Coming Up” features Paul McCartney playing ten roles (himself, two guitarists, a bassist, a drummer, a keyboard player, and four horn players) and Linda McCartney playing two (one female and one male backup singer.) The “band” identified as “The Plastic Macs” on the drum kit (a homage to Lennon’s conceptual Plastic Ono Band), features Paul and Linda’s imitations of various rock musician stereotypes, as well as a few identifiable musicians. In his audio commentary on the 2007 video collection The McCartney Years, McCartney identified characters that were impersonations of specific artists: Hank Marvin (guitarist from the Shadows), Ron Mael of Sparks (keyboards), a ‘Beatlemania-era’ version of himself, and a drummer vaguely inspired by John Bonham from Led Zeppelin While others such as authors Fred Bronson and Kenneth Womack have suggested that there are other identifiable impersonations in the video, such as Andy Mackay, Frank Zappa and Buddy Holly. McCartney said the other roles were simply comic relief.

Milords, Ladeees and Gennellmennn! Presenting for the first and last time these beautiful photographic representations of the latest sensation in the world of rock music. Yes, it’s the Plastic Macs, captured in light by the other two members of the group — their wife.

This is the band whose members reflect an uncanny similarity to characters and types peculiar to rock music. Not to speak of the great resemblance they bear to each other! Which is understandable since all the band members seen here are not only P. Macs, they are all P. McCs — Paul McCartneys, that is.

For these photographs were taken by Linda during work on the amazing video film of Paul’s last single “Coming Up”, written, sung and produced by himself.

And since he played all the instruments an incredible piece of technical wizardry was employed to demonstrate the fact. TV viewers around the world saw Paul singing the song accompanied by himself nine times over along with two Lindas.

In technical terms, says producer Phil Davey, a multiple Chroma-key system was used. In everyday language that means that several figures were superimposed on a background. That’s been done before. What was different this time was the size of the operation and the advanced sophistication of the techniques  employed, including using a computer for the lighting. As a result the film showed Paul singing in front of a full orchestra playing musical and visual harmony. In other words you couldn’t see the joins.

The exercise involved extensive pre-planning for Phil and director Keith McMillan. It also involved the efforts of seventeen people for four days creating both the set and an exact replica of the set for the superimpositions, seven other involved with costumes, make-up and hairdressing and a studio crew of 32 people.

Phil explained just one of the many details that sets this film apart from all other rock videos. “Normally you can’t change the lighting when you’re superimposing characters,” he said, “but we wanted it to look as though it was one band in a studio so we employed a computer to ensure that the lighting changed at exactly the same second. So when you see the lights change you are really seeing twelve different changes at precisely the same moment.”

Paul’s contribution was equally involved and exhausting. Filming lasted 25 hours over two days, a gruelling schedule of rehearsal, costume and make-up changes, singing and playing for Paul. When one of the Pauls turns to another on screen the action had to be synchronised exactly. In fact the sax player who is constantly out of step with his colleagues was a masterpiece of McCartney timing.

And so to the Plastic Macs. The characters portrayed by Paul and captured by Linda were not meant to be direct imitations of other rock stars but the influences and Paul’s tongue in cheek humour are well to the fore. Comparisons with Shadow Hank Marvin, Sparks keyboard player Ron Mael and Roxy Music saxophone player Andy Mackay are not hard to make.

But most amazing of all is the photograph of Paul in the famous style of jacket the Beatles first wore along with the Hofner left-handed bass guitar which was his trademark at the start of his career. It’s 18 years since Paul looked like that. Through Linda’s affectionate lens it could have been 18 minutes ago.

Coming Up – Cosmically Conscious 1 year ago