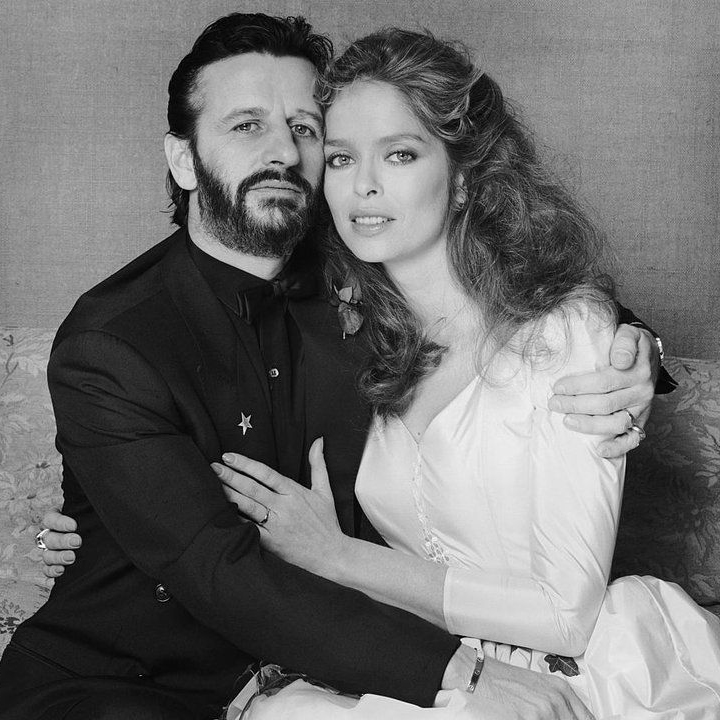 A large crowd of well-wishers who gathered outside the Register office were rewarded by seeing the bridal couple, Paul and Linda and their four children, and George and Olivia Harrison who also attended the ceremony.

Afterwards the couple posed for the society photographer Terry O’Neill, who flew in from New York for the occasion. The 70 guests then drove to a reception at the West End club Rags, where they toasted the couple with champagne and ate and danced the night away. Mr. Roger Shine, one of Ringo’s witnesses, said of the reception, “It has been a Knees-Up Mother Brown, and lots of dancing with people playing spoons”.

A memento of the event was taken away by each guest in the form of a solid silver star. The wedding cake was also star-shaped.

LONDON — In a Beatles reunion of sorts, the three surviving members of the famed group got together for the marriage of drummer Ringo Starr to svelte New York-born actress Barbara Bach.

Some 350 fans screamed and shouted — one even fainted — as the 15-member wedding party rolled up to London’s Marylebone registry office in a fleet of black taxi cabs.

Starr, 41, arrived last in a red London cab with Miss Bach, 32, a top fashion model who played the seductive Russian major in the James Bond movie thriller ‘The Spy Who Loved Me.’ For both, it was the second marriage.

The screaming began when Paul McCartney together with his wife Linda and their child edged apprehensively around a corner of the building housing the registry office and dashed inside.

It redoubled when Starr and his bride-to-be dashed from their red taxi and slipped into the building between a double avenue of police, Miss Bach in a cream silk dress with red roses and Starr all in black — black suit, black shirt, black bow tie.

Ringo’s mother Elsie and stepfather Harry Gray traveled from Liverpool for the 45-minute ceremony on a cold, windy afternoon.

Police described the occasion as ‘relaxed.’ There were no incidents.

After the ceremony, the wedding party drove to Rags, an exclusive Mayfair club, for a wedding reception that brought together the surviving Beatles — Starr, George Harrison and McCartney — for the first time in public since 1969.

‘It’s very very good, everybody’s having a very good time and there’s plenty of good music here,’ one reveller said, as the sounds of old Beatles favorites drifted into the street.

Three guitars were delivered to the reception, but guests said the trio did not play together. […]