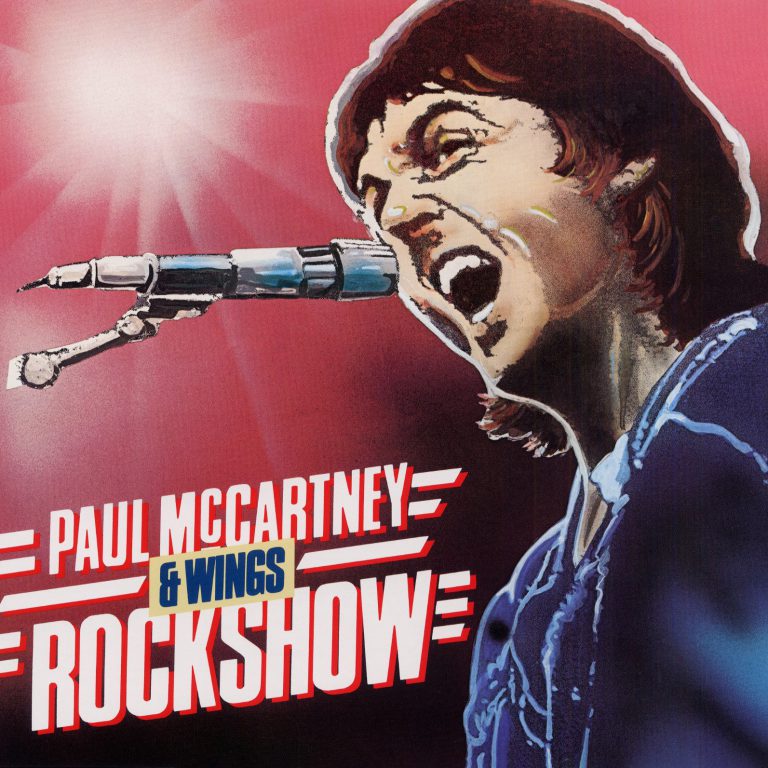 Flash! Flash! Flash! Flash!! go the photographers as a never-ending stream of stars and celebrities flock to the Dominion Theatre, London on a Wednesday night. The big occasion? Well, it’s the premiere of Rockshow.

The excited crowds outside the theatre watch as Gary Glitter, Zandra Rhodes, Mike Oldfield, Steve Strange, Steve Harley and Phil Lynott and many others jostle through the flash bulbs, signing autographs as they go. The foyer fills to bursting point, everyone stretching forward to see the stars arrive.

A flurry of activity and through the doors pop The Earl and Countess of Snowdon, looking as always cool and poised as they make their way to the small V.I.P. reception room close to their balcony seats.

Another flurry and a burst of screaming and this time it’s Paul and Linda McCartney arriving. The foyer surges forward, Paul and Linda acknowledge the cries with a wave and a grin and follow The Earl and Countess of Snowdon to the reception room.

Already inside are Norman St. John Stevas, M.P. and Lord Montagu, who are swapping fashion notes with Gary Glitter and Steve Strange. Will the establishment turn into glittering new romantics?? It’s time to take our seats for the movie; the party makes its way into the theatre. As Paul and Linda enter, the audience stands and cheers — and this is before the film!

The lights go down and Linda’s award-winning cartoon Seaside Woman flashes on the screen. Then it’s the main event, Rockshow. For the next two hours the audience claps, screams and sings along as if they’re at a live concert. The atmosphere is electric as Wings are on stage, larger than life. The Dominion enters a new dimension for it seems that the energy of 72,000 people from the King Dome, Seattle, has been magically transported to London.

The lights go up with the last bars of Soily ringing in the ears, and for a moment the audience is silent. Rows of flushed, excited faces look up to where Paul and Linda are seated. It’s no longer a film, but the man himself. Once again screams, cheers and desperate cries of “Paul, Paul,” fill the theatre. Paul and Linda rise from their seats, wave and give the familiar Wings hand sign that brings even louder cries from the audience.

The black limousines outside the theatre take the other stars back into the night, but for the thousand Wings fans there’s no sign of Paul and Linda. The bedlam in the foyer continues as the stars of Wings decide to invite a few friends backstage for an impromptu celebration party. Gary Glitter’s there again, Eric Stewart (10CC), Phil Lynott (without whom no party is complete), Zandra Rhodes looking colourful, Victor Spinetti looking young, Billy Connolly being Scottish, Paul Gambaccini being knowledgeable and Kenney Jones — Who? Half an hour later the fans are still outside the theatre, their excitement reaching fever pitch for another glimpse of Paul and Linda.

As they leave the theatre, police and security attempt to keep the crowds back, but inevitably the cordon breaks and Paul and Linda are beseiged with fans. After a lifetime of enjoying fan fever, Paul signs autographs and beams through a shower of kisses that would make Prince Charles blush. Then Paul and Linda disappear, leaving as always the fans wishing for more; but with a night to remember — until the next time…

Rockshow is a 1980 concert film release by Paul McCartney and Wings, filmed during the band’s 1976 North American tour. The film features 30 songs from segments of four concerts of the tour: New York, on 25 May (four songs); Seattle, Washington, 10 June (five songs); and Los Angeles, California, 22 June (fifteen songs) and 23 June (six songs).[2] Both the cover of the home video release and McCartney himself in his intro to The McCartney Years DVD acknowledge only the Seattle concert, however. These concerts were part of the 1975–76 Wings Over the World tour, which also produced the triple live album Wings over America (1976) and the Wings Over the World television documentary (1979). This is also the first film released by Miramax. […]

The film premiered on 26 November 1980 at the Ziegfeld Theatre in New York; McCartney did not attend, as he was in the studio at the time. They did attend the London Premiere at the Dominion Theatre in Piccadilly Circus on 8 April 1981. The film was later edited down to 102 minutes for its home video release. Its first home video release was on Betamax in October 1981, with a VHS, laserdisc, and CED release in 1982. This would be the last time a feature-length version of the film would be available to the general public until 31 years later, as McCartney had remained reluctant to make the entire film available to the general public on VHS or DVD. In 2007, a shortened cut with only seven songs was released as part of The McCartney Years DVD set – one of which, a version of the Beatles’ “Lady Madonna”, was originally left out of the Rockshow home video release.