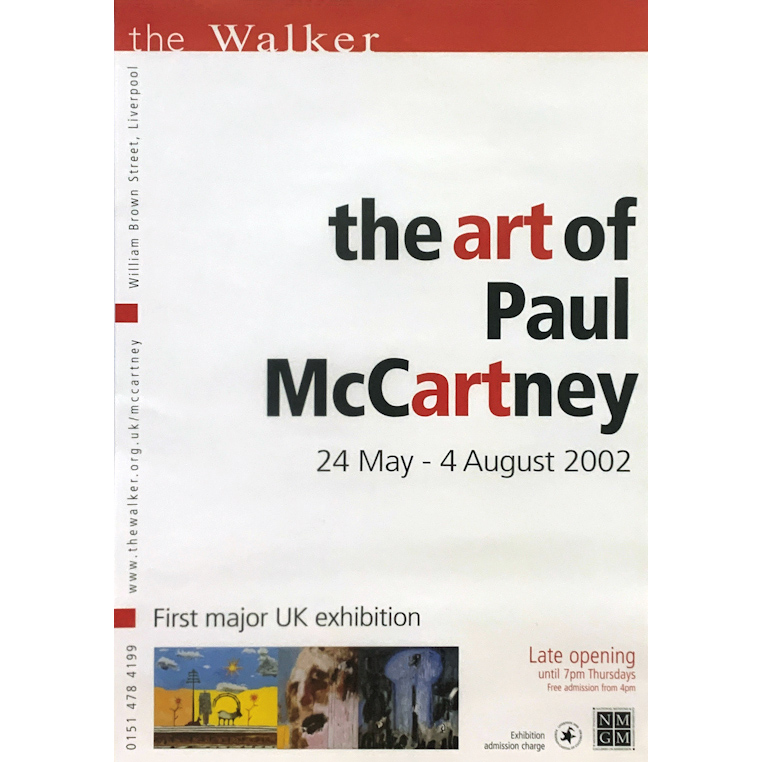 “The Art Of Paul McCartney” exhibition in Liverpool

From May 24 to August 4, 2002, Paul McCartney’s paintings and sculptures were exposed at Walker Art Gallery, in Liverpool. This was Britain’s first comprehensive exhibition of that facet of his art.

On July 25, 2002, Queen Elizabeth II visited the exhibition in presence of Paul McCartney and his wife Heather.

[Me and Queen Elizabeth II] were to see each other again shortly afterwards, but this time on my home turf! I was very honoured to be given a painting exhibition at the Walker Art Gallery, which John and I had visited on many occasions as students. It was my extreme privilege to be able to show Her Majesty around the gallery.

A MEETING between Sir Paul McCartney and Yoko Ono alongside the Queen failed to materialise yesterday, fuelling speculation that the ill-feeling between the former Beatle and John Lennon’s widow has not diminished with time.

Liverpool city council officials had hoped that Sir Paul and Ono, who both met the Queen separately yesterday, would make a joint appearance on the balcony of Liverpool Town Hall with the Queen and Prince Philip.

But instead Sir Paul, who showed the Queen around an exhibition of his art work, failed to make the 400-yard journey to see Ono, saying he had to leave immediately for a recording session in London. Ono, whose influence over her late husband was often said to be a contributory factor in the Beatles’ split, had met the Queen earlier during the opening of the £32 million passenger terminal at John Lennon Airport.

She then travelled to the town hall, where it was presumed that Sir Paul would join her and the royal party to watch a Golden Jubilee parade. In fact, officials were so confident that Sir Paul would be on the balcony that they listed his appearance in their running order.

Relations between Sir Paul and Ono were reportedly bad in the first few years after the Beatles broke up, but seemed to have improved. They have worked together on the Beatles Anthology albums, television series and a book, and are on speaking terms. However, last year Sir Paul did grumble that Ono had made more out of the song Yesterday than he had — even though Sir Paul wrote it and the recorded version featured no other Beatle.

Describing their relationship then, he said: “We don’t not get along. But, you know, it’s like some people you may be destined to not become great buddies with.”

Despite the snub it was a proud day for Ono as the Queen was shown a life-sized bronze statue of Lennon, who met the Queen several times. Ono said: “It was a beautiful and exciting day — it was quite amazing. She’s a very sweet person. It’s such an honour for the airport to be named after John — it’s a very long and lasting tribute and I hope the world will visit Liverpool through the airport.”

More than 30,000 lined the streets during the Queen’s walkabout in the city centre before she visited the Walker Art Gallery to view an exhibition of 70 examples of the other ex-Beatle’s art work. Not on display were some of Sir Paul’s more risque efforts, or those entitled The Queen After her First Cigarette, The Queen Getting a Joke and A Greener Queen.

“The gallery had the opportunity to include the pictures — it was up to them,” said Sir Paul afterwards. “I would have been happy to have shown them to the Queen — they are very affectionate and I think she has a good sense of humour”.

But he said of the works the Queen did view: “I think she liked them. She said they were very colourful and I took that as a great compliment.”

Sir Paul presented the Queen with a catalogue of his work “in case she has a quiet moment”.