Release of “Wingspan: Paul McCartney’s Band on the Run” 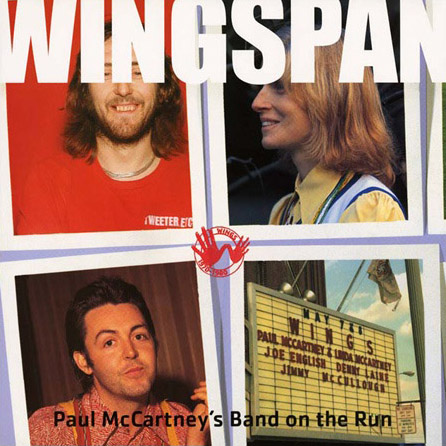 Highlighted by 150 full-color and black-and-white photographs, as well as intimate interviews, a personal scrapbook of McCartney’s band Wings follows the group as they became one of the hottest acts of the 1970s, tracing the history of Wings from the break up of the Beatles through the 1980s and chronicling some of their biggest hits. Original. 30,000 first printing.

In the 1970’s, Paul McCartney’s Wings had a hard act to follow, the Beatles, but brought us what many have described as the purest rock music of the decade – that brief period after music stopped selling revolution and before it began selling pierced navel rings. Wings was huge: the group had more No 1 singles (six) than the Stones, Eagles or three other ex-Beatles combined. This is an intimate scrapbook charting how the band grew and became one of the biggest-selling acts of the 70s. At the same time Paul and his wife Linda, a fellow band member, were raising a family, and the book is a personal record of the Wings’ beginnings after the break-up of the world’s most famous group through to the very end of that decade. Apart from the insight into the dynamics of a hugely popular band, it reminds the reader of some of the songs and how they were written, recorded and performed: “Band on the Run”, “Mull of Kintyre”, “Maybe I’m Amazed”, “Jet” and “Junior’s Farm”. The Guardian

From the breakup of the Beatles to the folding of Wings, from a business nightmare to a Tokyo jail, this companion to the Wingspan album and TV/video documentary traces ten years in the life of Paul McCartney.

Told in Paul McCartney’s own words, Wingspan is an intimate scrapbook that charts how his band Wings started from scratch to become one of the biggest-selling acts of the 1970s, with memorable hit albums Band On The Run, Ram, Venus and Mars and others, and huge-selling singles including Another Day, My Love, Live and Let Die, Listen to What the Man Said, Silly Love Songs, Let ‘Em In, Mull of Kintyre, With a Little Luck and Coming Up. At the same time, Paul and his wife Linda, who played keyboards in Wings, were raising a family at home and on the road.

With hundreds of rare and unseen photographs, many taken by Linda, Wingspan travels the distance, yielding a unique insight into the dynamics of a top band and an extraordinary marriage.