“Kisses On the Bottom” announced 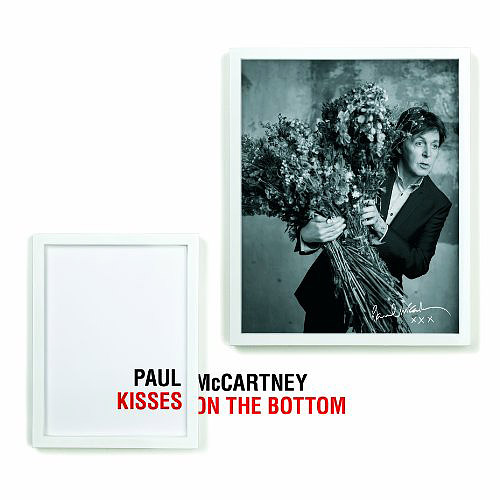 On December 17, 2011, Paul McCartney had tweeted four cryptic words “kisses on the bottom”. On December 19, 2011, a new yet-untitled album was announced.

The name of the new album was finally announced on January 8, 2012.

On December 19th 2011 Paul announced that February 2012 would see the release of his brand new studio album. Scores of fans then streamed the new original track ‘My Valentine’, many assuming it would be the new record’s title track.  While a few Twitter hints have been dropped and rumours have run rampant, Paul puts an end to speculation today, confirming that the album will indeed be titled ‘Kisses On The Bottom’.

‘Kisses On The Bottom’ is a collection of standards Paul grew up listening to in his childhood as well as the two new McCartney compositions ‘My Valentine’ and ‘Only Our Hearts’.  With the help of Grammy Award-winning producer Tommy LiPuma and Diana Krall and her band—as well as guest appearances from Eric Clapton and Stevie Wonder,
McCartney’s new album is a deeply personal journey through classic American compositions that, in some cases, a young Paul first heard his father perform on piano at home.  The full tracklisting reveals that Paul has been both reverent and adventurous in his song choices.

I had an album coming out that up until that point had been called “My Valentine”, which is one of the tracks features on it, that I wrote for Nancy. Everyone was happy with this but suddenly I got the feeling that it might mean the album was really only relevant around Valentine’s Day, which might make it a bit time specific. So I was looking for another title, and then I realized that I didn’t really want the album to just have a romantic title. One of the thoughts was “Love So Fine” which is one of the lyrics out of “My Valentine”. But again, I wanted something a little bit more me, and one evening I thought of the fun lyric from the “Going To Sit Right Down And Write Myself A Letter”. Over the years, people have had a little joke with the line “a lot of kisses on the bottom, I’ll be glad I got them”. And I thought that would be fun, so I tried it out on a few people and it was a really split reaction. Certain people said “Ah I love it, that is cool”. And some people said “Are you kidding? Are you really going to do that?” So in the end, I thought no, this is what it’s going to be called and people said it was going to be controversial but I said that was okay. I reminded people that one of the first times any controversy had ever arisen was when we told them the group was called The Beatles and they said “err, creepy crawly things” and so that’s what the tweet was about. It was a way to introduce the new album and get people talking.