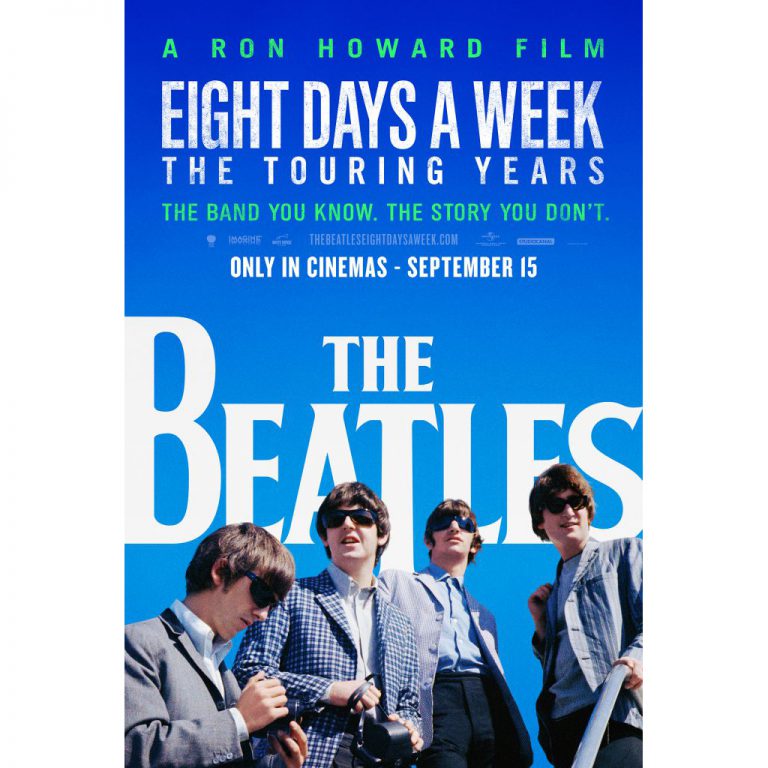 On this day, Paul McCartney and his wife Nancy, Ringo Starr and his wife Barbara Bach, director Ron Howard attended the world premiere of “Eight Days A Week – The Touring Years”, the Beatles’ documentary about their career as a live band.

Despite the weather warnings that have been running all day, it’s another beautiful evening, and at 7pm in Leicester Square there is no sign of rain.  I’m waiting at the “talent drop off” point with an army of publicists: all waiting for their respective clients to arrive. The excitement buzzes through the air as Beatles songs blast out across the Square, which tonight is hosting thousands of fans, swarms of paparazzi, A-list celebrities, international news crews and a replica Abbey Road crossing for good measure.

The crowd goes mad as people like Michael Palin, Terry Gilliam, Eric Clapton, Liam Gallagher, Jools Holland, Bob Geldolf and Madonna arrive. But just as they do in the film, the screams go up a gear when Paul and Ringo arrive at about 7:45pm. Working their way round the Square, the pair are on top form, and it is clearly an emotional experience for them.

Speaking to media on the blue carpet about the film, Paul said: “We’re getting great memories obviously of playing with John and George, so that’s very emotional and very special to see that again. There’s some great things that we’d kind of half forgotten, like we refused to play a show in Jacksonville in the south of America because we heard it was segregated, with blacks on one side and whites on the other – we thought that’s stupid and so won’t play it and we didn’t, so they had to change the rules. That’s the first integrated show that Jacksonville had, so looking back now that’s very cool”

On the blue carpet Paul also reveals that the jacket he is wearing is exactly the same jacket he wore for the premiere of ‘A Hard Day’s Night’ when he was 22. And that’s without any alterations: so another frankly unbelievable achievement!

The final media commitment before heading in to watch the film is a live interview with comedian John Bishop (which is being broadcast live around the world on The Beatles Facebook page as well as being beamed into cinemas globally), and Paul is then ushered along the rest of the Blue Carpet into the cinema where, before taking his seat, he’ll be introduced on stage along with Ringo. As the pair are waiting backstage for their introduction, they giggle away like school boys together. It’s great to watch them back together, and there is so much affection: the uniqueness of the experiences they shared together forging an unbelievable bond. Onstage introductions over, Paul can finally take his seat where, like the majority of the audience, he will watch the film for the first time, and I can only imagine what it must be like for him to watch ‘Eight Days A Week’.

I find it fascinating watching videos of Paul from this period of his career, because all his mannerisms are the same as they are now, and you can see the way he is with people is the same, with the same excitement and sense of wonder. His energy and enthusiasm is as strong now as it clearly was then. His sense of right and wrong is still never compromised, and this is never so clear as it is in the scene in the film about the segregated audience in Jacksonville. It is this bit where it hits me even harder just how huge the impact Paul has had on the world at large. It goes way beyond the incredible melodies. It’s one thing being insanely gifted – but the responsibility that comes with the gift is equally as insane.

‘The Beatles: Eight Days A Week’ is a triumph. Like many, I’ve read a lot about The Beatles, and seen a lot of footage of The Beatles, but this is a film that offers a different perspective, and feels fresh. In many ways, it’s like Paul himself: always happy to celebrate all the wonderful things that have happened in the past, while also constantly looking for new ways to move forward.