“Change Begins Within: A Benefit Concert For The David Lynch Foundation” DVD released 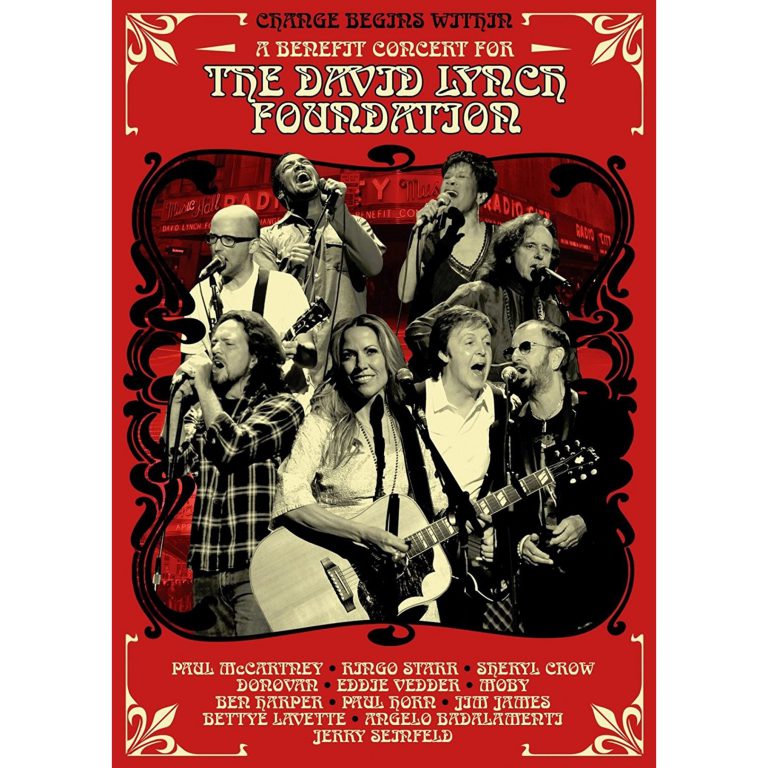 Change Begins Within: A Benefit Concert For The David Lynch Foundation

“Change Begins Within: A Benefit Concert For The David Lynch Foundation” documentary broadcast on US TV

Yes! Finally, the 2009 Change Begins Within: A Benefit Concert for the David Lynch Foundation arrives on DVD via Eagle Rock Entertainment on September 1, 2017. It’s not the complete show, which was a fundraiser intended to benefit (as the DVD’s title makes plain) the David Lynch Foundation. This 86-minute programs omits some key moments (you didn’t think Sheryl Crow showed up for just one song, right?). But enough made the final cut to make it easily recommendable, particularly to Beatles fans since Paul McCartney and Ringo Starr make up the lion’s share of the running time. And they even perform together, the concert’s highlight!

In fact, everyone else seems to be functioning as a revolving door of opening acts for the two ex-Fabs. Moby and veteran soul singer Bettye LaVette kick things off with “Natural Blues.” Pearl Jam’s Eddie Vedder does his own “Rise” before joining Ben Harper for a cover of Queen and David Bowie’s “Under Pressure” (Vedder actually did two other tunes, as did Harper, that weren’t included). The aforementioned Crow strums through George Harrison’s “My Sweet Lord” (her own tune, “Riverwide,” was left off the disc). Donovan’s five song set was strangely reduced to just two: “Hurdy Gurdy Man” and “Isle of Islay” (would’ve been nice to have “Season of the Witch,” performed with Crow).

Ah, but then host David Lynch introduces Ringo who brings the crowd to its feet (many of whom, quite honestly, looked a bit bored during the early sections—though a brief comedy routine by Jerry Seinfeld gets laughs). Backed by the house band—including Ben Harper on slide guitar and both Vedder and Crow as backing vocalists!—Starr bounces through “It Don’t Come Easy,” “Boys,” and “Yellow Submarine.”

Next up: the main event. Backed by his longtime touring band, Paul McCartney tears through six tunes on his own—including “Drive My Car,” “Jet,” “Got To Get You Into My Life,” “Let It Be,” “Here Today,” and “Band On the Run.” He’s in great voice. Awesomeness strikes hard when Starr comes back out, sharing a mic with McCartney for “With a Little Help From My Friends.” Then it’s back to the kit for Starr as McCartney leads a group singalong of “Cosmically Conscious,” an obscurity he released as a B-side on his “Off the Ground” single (1993), but was actually written during the Beatles’ trip to India in ’68.

To the best of my knowledge, this is the only time McCartney has performed this little-known psychedelic gem in concert—and to have Ringo drumming on it only makes it that much more special. McCartney shares his mic with Bettye LaVette for a show-closing “I Saw Her Standing There.”

What’s missing from McCartney’s set? “Lady Madonna,” “Blackbird,” and “Can’t Buy Me Love.” Why aren’t they here? Who knows, but their omission is admittedly disappointing. Oh well, still glad to have what is here.

As a bonus, the DVD includes a series of endearing awkward interviews conducted by David Lynch himself with McCartney (quite brief), Starr, Vedder, and Harper.