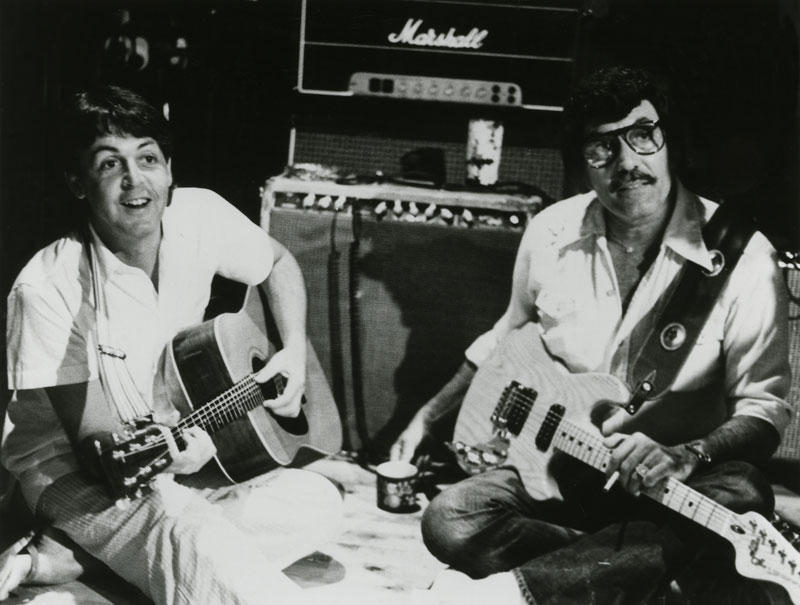 Carl Lee Perkins (April 9, 1932 – January 19, 1998) was an American singer-songwriter who recorded most notably at Sun Records Studio in Memphis, Tennessee, beginning in 1954. His best-known song is “Blue Suede Shoes“.

According to Charlie Daniels, “Carl Perkins’ songs personified the rockabilly era, and Carl Perkins’ sound personifies the rockabilly sound more so than anybody involved in it, because he never changed.” Perkins’ songs were recorded by artists (and friends) as influential as Elvis Presley, the Beatles, Jimi Hendrix, and Johnny Cash, which further cemented his place in the history of popular music. Paul McCartney even claimed that “if there were no Carl Perkins, there would be no Beatles.”

Called “the King of Rockabilly“, he was inducted into the Rock and Roll, the Rockabilly, the Memphis Music, and the Nashville Songwriters Halls of Fame; and was a Grammy Hall of Fame Award recipient. […]

During May 1964, Perkins toured Britain along with Chuck Berry.[56] Perkins had been reluctant at first to undertake the tour, convinced that as forgotten as he was in America, he would be even more obscure in the U.K., and he was afraid of being humiliated by drawing meager audiences to the performances. It was Berry who convinced him that they had remained much more popular in Britain since the 1950s than they had in the United States, and that there would be large crowds of fans at every show. The Animals backed the two performers. On the last night of the tour, Perkins attended a party that turned out to be for him, and ended up sitting on the floor sharing stories, playing guitar, and singing songs while surrounded by the Beatles. Ringo Starr asked if he could record “Honey Don’t”. Perkins answered, “Man, go ahead, have at it.” The Beatles would cover “Matchbox“, “Honey Don’t” and “Everybody’s Trying to Be My Baby” recorded by Perkins but adapted from a song originally recorded by Rex Griffin during 1936 with new music composed by Carl Perkins, a song with the same title also recorded by Roy Newman in 1938. The Beatles recorded two versions of “Glad All Over” in 1963. […]

During 1981 Perkins recorded the song “Get It” with Paul McCartney, providing vocals and playing guitar with the former Beatle. This recording was included on the chart-topping album Tug Of War released in 1982. This track also comprised the B-side of the title track single in a slightly edited form. […]

Everybody's Trying To Be My Baby

Sure to Fall (In Love with You)

Officially appears on Stop and Smell the Roses