Back In The World - Ultimate Archive Collection

On the 29th November 2002, one year to the day that George left us, his closest friends gathered to celebrate his life in the only way they knew how – by playing his music. This amazing and historic event was filmed in Hi-Definition.

The first half of the show provided an insight into George’s spiritual self as Anoushka Shankar and a 16-piece orchestra of Indian musicians performed a special composition by her father and George’s mentor, Ravi Shankar. The piece was entitled “Arpan”, which means offering. Within the piece Ravi expresses aspects of George’s moods and spiritual aspirations. “Arpan” includes Eric Clapton playing a haunting acoustic solo.

The second half gave the audience a rare sighting of members of the Monty Python team performing some of George’s favorite skits, including participation from a surprise guest. This was a tribute to George’s well-known sense of humor.

The night then moved to Eric and friends giving the performance of their lives singing George’s songs. All the musicians that George worked with over the years, from The Beatles to the Traveling Wilburys, dedicating their time to learn the songs and perform them as a tribute to their dear friend.

Eric Clapton led the band with Jeff Lynne singing “I Want To Tell You”, “Inner Light” and “Give Me Love”. Jools Holland and Sam Brown gave “Horse To The Water” it’s first live outing. Tom Petty and the Heartbreakers gave a particularly resounding performance of “Taxman” as well as “I Need You” and the Wilbury’s number, “Handle With Care”. Ringo Starr caught everyone with a tear in their eye with a rendition of “Photograph”, a composition he wrote with George, which seemed to sum up how everyone felt. Paul McCartney, fresh from his world tour, treated everyone to a little bit of Ukulele – one of George’s favorite instruments and joined Eric and band for “While My Guitar Gently Weeps” and “For You Blue”. Billy Preston had everyone out of their seats and singing along with “My Sweet Lord”. The band then came together to give a rousing version of “Wah-Wah”.

Joe Brown closed the evening with the old standard; “I’ll See You In My Dreams”, a loving and appropriate sentiment. It was a great show for one of the most loved men of our generation. We will remember George and this evening forever and hopefully we will see him in our dreams.

A two-disc Blu-Ray (the complete concert and theatrical version plus extras including an exclusive Blu-Ray extra) and a Digital Download of the concert will be released on March 22nd. The film was directed by David Leland and produced by Ray Cooper, Olivia Harrison and Jon Kamen.

All profits from the Blu-Ray and Digital Download will go to The Material World Charitable Foundation, founded by George in 1973.

The Concert for George was held at the Royal Albert Hall in London on 29 November 2002 as a memorial to George Harrison on the first anniversary of his death. The event was organised by Harrison’s widow, Olivia, and son, Dhani, and arranged under the musical direction of Eric Clapton and Jeff Lynne. The profits from the event went to the Material World Charitable Foundation, an organisation set up by Harrison.

The concert opened with a traditional Sanskrit invocation, the Sarvesham chant, followed by Indian music when Anoushka Shankar, daughter of Ravi Shankar, played “Your Eyes”. Next, Anoushka Shankar and Jeff Lynne performed “The Inner Light“, followed by a Ravi Shankar composition “Arpan” (Sanskrit for ‘to give’), specially written for the occasion.

Next there was a comedy interlude with members of the Monty Python troupe (Eric Idle, Terry Jones, Terry Gilliam along with Neil Innes) performing “Sit on My Face”. Then Michael Palin came out as an over-the-top announcer who eventually states that he only ever wanted to be a lumberjack. He was then joined by the Pythons, Innes, Carol Cleveland and actor Tom Hanks, to perform “The Lumberjack Song”.

Between them they played a selection of mostly Harrison’s songs, from both Beatle and post-Beatle eras, generally staying faithful to Harrison’s original arrangements. Performances included Clapton and Preston on “Isn’t It a Pity”; Starr on “Photograph”; McCartney and Clapton on “Something” (McCartney opening with a solo ukulele accompaniment which then shifts into a full band version featuring Clapton); Preston on “My Sweet Lord“; McCartney, Clapton and Starr reuniting on “While My Guitar Gently Weeps“; Petty and Lynne on “Handle With Care”; and the performance of “Wah Wah”.

Joe Brown closed the show with a rendition of “I’ll See You in My Dreams” on ukulele, one of Harrison’s favourite instruments.

The event was filmed and a motion picture version, directed by David Leland and photographed by Chris Menges was released on DVD on 17 November 2003. A compact disc version was also released on the same date although the Monty Python and Sam Brown tracks were not included on the CD. A Blu-ray version was released by Rhino Records on 22 March 2011.

On November 29th, 2002, exactly a year after his death, George Harrison was honored at London’s Royal Albert Hall. Concert for George, in theaters now and available in November on DVD, documents the performances of Harrison’s songs by his closest friends, including Eric Clapton, Ravi Shankar, Ringo Starr, Jeff Lynne, Tom Petty and the Heartbreakers, and Paul McCartney. Harrison’s twenty-five-year-old son, Dhani, plays acoustic guitar through most of the performance.

“It was [Clapton’s] idea,” says Harrison’s widow, Olivia. “He phoned me not long after George died and said, ‘I’d like to do something.’ Eric was a very deep friend of George’s, so I felt confident and relieved that it was Eric coming to me.”

“Olivia had given me this job of being musical director,” says Clapton, “to single out people for certain songs, and I found that really hard. We were all quite protective of our relationships with George.”

Over the years, the two guitarists shared a unique bond — always brotherly, even after Clapton married Harrison’s first wife, Patti Boyd. “A lot of times during our relationship, I found it very difficult to communicate my feelings toward George — my love for him as a musician and a brother and a friend — because we skated around stuff,” says Clapton. “I was probably dealing with that, too, making amends.”

For weeks, Harrison’s friends rehearsed at London’s Asylum Studios. Clapton was impressed with McCartney’s demeanor: “Those guys’ inability to express love for one another was classic,” he says of the Beatles. “The exception is Ringo, who says [in the film], ‘I love George, and George loved me.’ That wouldn’t have been so easy for Paul.”

McCartney shines, playing ukulele and duetting with Clapton on “Something,” and singing lead on “All Things Must Pass.” In rehearsals, says Clapton, “Paul had to admit that he didn’t know ‘All Things Must Pass,’ and that was an awful thing to confront. It was huge humble-pie stuff for Paul to be among these people who he may have thought had a better relationship with George than he did. But I believe Paul missed George as much as — if not more than — anybody.”

The concert’s most poignant moment came when Billy Preston sang Harrison’s 1970 song “Isn’t It a Pity,” with Dhani on guitar and vocal harmonies. “That was the most excruciating song,” says Olivia. “It was obviously very emotional for me to see him up there paying tribute to his dad. And listening to George’s words — ‘Beware of sadness/It can hit you, it can hurt you, make you sore/And what is more, that is not what you are here for’ — feeling so incredibly sad and trying not to be sad — taking George’s advice.” 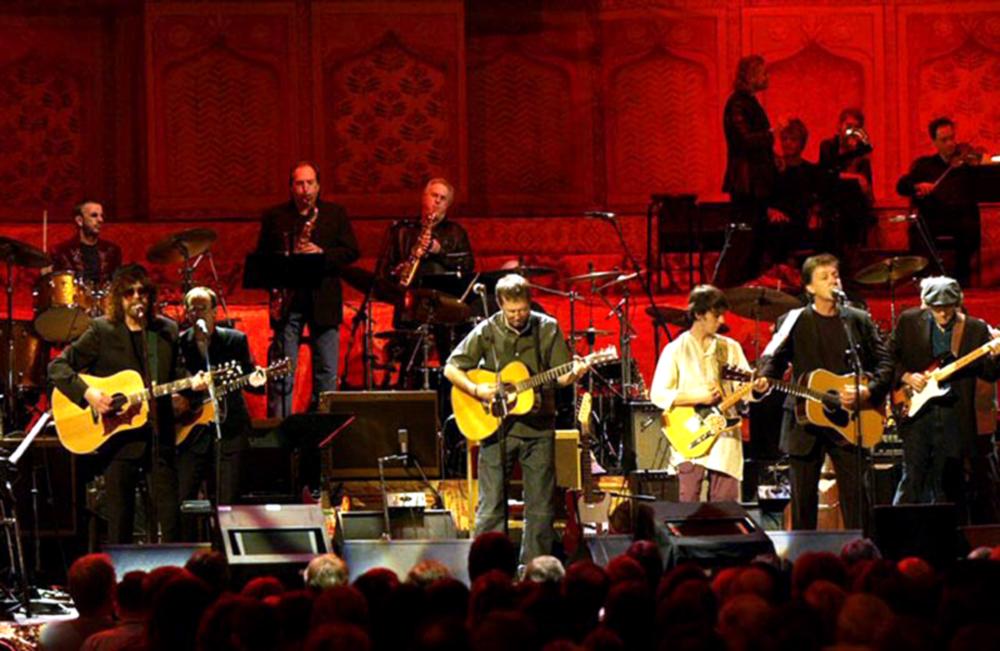 This was the 8th concert played at Royal Albert Hall.

All Things Must Pass