Album This song officially appears on the He Ain't Heavy, He's My Brother CD Single.

“He Ain’t Heavy, He’s My Brother” was a hit for The Hollies in 1969. Paul McCartney participated to the recording of a new version of the song in 2012, as part of a charity project for the victims of the Hillsborough Disaster. His contribution can be heard at about the 3:01 mark.

The Hillsborough disaster was a fatal human crush during a football match at Hillsborough Stadium in Sheffield, South Yorkshire, England, on 15 April 1989. It occurred during an FA Cup semi-final between Liverpool and Nottingham Forest in the two standing-only central pens in the Leppings Lane stand allocated to Liverpool supporters. Shortly before kick-off, in an attempt to ease overcrowding outside the entrance turnstiles, the police match commander David Duckenfield ordered exit gate C opened, leading to an influx of even more supporters to the pens. This led to a crowding in the pens and the crush. With 96 fatalities and 766 injuries, it is the worst disaster in British sporting history. […]

“He Ain’t Heavy, He’s My Brother” is a ballad written by Bobby Scott and Bob Russell. Originally recorded by Kelly Gordon in 1969, the song became a worldwide hit for The Hollies later that year and a minor hit for Neil Diamond in 1970. It has been recorded by many artists in subsequent years.

Scott and Russell were introduced to each other by Johnny Mercer, at a California nightclub. Although Russell was dying of lymphoma and the pair met only three times, they managed to collaborate on the song.

In 2012, a version of the song was recorded, and was released on 17 December 2012, by musicians and celebrities going under the name The Justice Collective, for various charities associated with the Hillsborough disaster.

The song went on to take the coveted Christmas number one position for 2012 on the UK Singles Chart, beating The X Factor winner James Arthur, who was number one the previous week.

After the News International phone hacking scandal, members of The Farm along with Pete Wylie, and Mick Jones of The Clash performed at an anti-The Sun concert at the Liverpool Olympia in September 2011. Following this they formed The Justice Tonight Band and toured the United Kingdom and Europe for the next year in order to raise awareness of the Hillsborough Justice Campaign.

Initially, the idea was to re-release the 2009 single “The Fields of Anfield Road” by The Liverpool Collective featuring The Kop Choir; however, this idea was rejected by Peter Hooton as only a relatively small number of people would buy it. Inspired by Everton’s Hillsborough tribute on 17 September 2012, the song was played at Goodison Park prior to their match against Newcastle United. It was then decided that a re-recording of this song by various artists including The Justice Tonight Band would be released as the charity single.

The road is long
With many a winding turn
That leads us to who knows where
Who knows where
But I'm strong
Strong enough to carry him
He ain't heavy, he's my brother

For I know
He would not encumber me
He ain't heavy, he's my brother
If I'm laden at all

It's a long, long road
From which…

2012 • For The Justice Collective • Directed by Simon Hanning 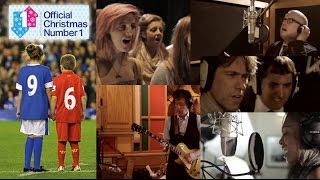