“Heartbreak Hotel” is a song recorded by American singer Elvis Presley. It was released as a single on January 27, 1956, Presley’s first on his new record label RCA Victor. It was written by Tommy Durden and Mae Boren Axton.

A newspaper article about the suicide of a lonely man who jumped from a hotel window inspired the lyrics. Axton presented the song to Presley in November 1955 at a country music convention in Nashville. Presley agreed to record it, and did so on January 10, 1956, in a session with his band, The Blue Moon Boys, the guitarist Chet Atkins, and the pianist Floyd Cramer. “Heartbreak Hotel” comprises an eight-bar blues progression, with heavy reverberation throughout the track, to imitate the character of Presley’s Sun recordings.

The single topped Billboard‘s Top 100 chart for seven weeks, Cashbox‘s pop singles chart for six weeks, was No. 1 on the Country and Western chart for seventeen weeks and reached No. 3 on the R&B chart, becoming Presley’s first million-seller, and one of the best-selling singles of 1956. “Heartbreak Hotel” achieved unheard feats as it reached the top 5 of Country and Western, pop, and Rhythm ‘n’ Blues charts simultaneously. It would eventually be certified double platinum by the Recording Industry Association of America. Presley had first performed “Heartbreak Hotel” during a live show in December 1955 during a tour of the Louisiana Hayride, but the song gained strong popularity after his appearance on Stage Show in March 1956. It became a staple of Presley’s repertoire in live appearances, last performed by him on May 29, 1977, at the Civic Center in Baltimore, Maryland.

In 1995 “Heartbreak Hotel” was inducted into the Grammy Hall of Fame, and in 2004 Rolling Stone magazine named it one of the “500 Greatest Songs of All Time”. That year it was also included in the Rock and Roll Hall of Fame’s “500 Songs that Shaped Rock and Roll”. A rock and roll standard, since its original release “Heartbreak Hotel” has been covered by several rock and pop acts, including Willie Nelson and Leon Russell, who recorded a duet version that topped the Country charts in 1979.

[Hearing rock’n’roll] was electrifying. You heard people saying, ‘I’ve never heard anything like that before, man.’ And it was that. You hear on the radio Elvis Presley’s ‘Heartbreak Hotel.’ It was like, ‘Oh my God, what is that?’ Now that we know it so well, you think, ‘Oh, it’s Elvis singing “Heartbreak Hotel.”‘ There will be listeners who can remember that moment when you heard that.

Chronicles in the Backyard Disc 3

Chaos And Creation In The Backyard - Ultimate Archive Collection 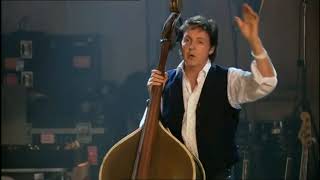 “Heartbreak Hotel” has been played in 2 concerts.

Latest concerts where Heartbreak Hotel has been played

Chaos and Creation at Abbey Road