Album This song officially appears on the McGear Official album.

Leaning on a Lamp-post

It was yes, it went across Europe and America. We brought it out at the time of the album. I think it went out first and then we followed up with the album. But they always played that one when we went to America and Europe did telly and that sort of thing.

I did “Leave It” on Top of the Pops and in the room next to me was Brian Ferry. It came to the thing and I said look to the BBC people. There we used to be an advert the Sandam and Port Man. He had this big cloak on and black hat, very stylish. I said “I want to be the Sandam and Port Man. I’ve got the hat, it is a beautiful velvet type of hat and I need the coat.” The BBC said “Look, we haven’t got one in Wood Lane television centre but we are trying for you. We are trying to get it somewhere else.” Just before transmission, just before it went out I said “Where’s my coat?” I said “Really, I can’t do it without the coat, just to go in there with a hat. It will look stupid. As they said “Hold on, hold on here it is.” I said “Let’s, get it on.” They said “Mike you are going to love where it came from.” I said, “Let’s get it on. The show is going to start in a second. They said “Mike, you are going to love.. “ I said “Why?” They said “We got it from Elstree Film Studios.” I said “And, so.” They said “Look in the label. So I looked in the label, just before I put it on and went in front at the Top of the Pops and sang “Leave it”. There inside the label was “Christopher Lee”, it was Dracula’s coat.

Do you like the false end there? DJs when it first came out and didn’t know, it came back and suddenly it would blow their heads off. So they hated it until they got used to it, that lovely false tab on the end and I like that. 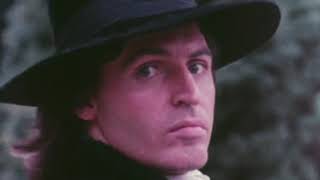 “I used to be terrified, as are most entertainers, of making a mistake. Now I realise the audiences don’t mind. In fact - they quite like it. You get these little ‘eureka’ moments - you make a mistake and go ‘Christ’. I did one a few years ago in Paris. I started 'Penny Lane' with the wrong verse and I had to stop the song and start again. We ground to a halt and the audience went mad. They enjoyed it and I said, 'At least it proves we’re live’. The review said it was the most marvellous bit." (Paul-June 2015).
it was that night...