Album This song officially appears on the Ballywonderland Official album.

“Live Long Rock & Roll” is a song by Henry McCullough, Wings’s guitarist from 1972 to 1973, and Irish singer-songwriter Don Mescall, written shortly before McCullough’s heart attack in 2012 from which he never recovered, passing away in 2016.

There are still sometimes when I’m on my own in the studio when I’ll listen to Paul McCartney’s bass on the track and think, ‘If anyone brought magic to this track – it was Sir Paul McCartney.’ I have to hand it to him. This wasn’t a rushed job. He put heart and soul into the bass line on the track. It’s absolutely incredible.

From an interview with Don Mescall, HotPress, August 1, 2019:

I was introduced to Henry by a friend of ours called Kevin Nolan back in the late ’90s. It was just one of those situations where we got on instantly. I think Henry had just become aware of my songwriting and we had an instant connection over Woodstock. Henry was the only Irish man to play Woodstock, and I’d just started working with the protest singer Richie Havens – who opened Woodstock. So that opened the door for us becoming friends. […]

So over the years, when things started rolling a bit with my own my work, I used to gravitate towards Ballywonderland – which was Henry and Josie’s place up in Ballymoney. So I’d be going around the country doing these little singer-songwriter gigs, and any time I was up that part of the country, I’d stay with them. We became close friends that way. […]

It was during one of these sabbaticals that he talked about how it all started for him. I was amazed to find out that his first gig was with a showband. I think he was a rhythm guitarist at the start. So I was blown away because to go from that story to Woodstock…I looked across from him and thought, ‘Jesus you’ve given your life to rock ‘n’ roll.’ […]

The showbands would’ve been playing the stuff that was coming in on the radio from America. American rock’n’roll. Chuck Berry. All that kind of thing. And there was a particular style of rhythm guitar playing, which sounds a bit like ‘chic-a-dong-dee‘. And when we went to write that song ‘Live Long’, Henry came up with this line which went, ‘Late night playing ‘chic-a-dong-dee/chic-a-chic-a-dong-day’. And I was laughing! That was a type of slang for the sounds that they all would’ve recognised from that era. But it was funny, because everyone who I invited to do the recording of this song – Paul McCartney, Albert Lee, Nick Mason – they all knew exactly what that was. I remember saying that I wanted to change that line, and Henry turned to me simply and said, ‘Ah Donny – that’s the hook!’

From an interview with Don Mescall, HotPress, August 1, 2019:

So, Nick was in the studio and I told him that Henry had taken ill. I said, ‘I’ve come up with an idea. I went back over a few songs that I’d written with Henry and I found one that I think is very special. I think this is the kind of song that I could invite people to record on. So he said, ‘Look, send me the song.’ So I did. I was in Britannia Row and I put down a very basic guitar track and bass drum and sang a guide vocal and sent it to Nick. He got back right away and said, ‘That’s a cool song, I want to play drums on it.’

With Nick coming into the studio to play drums, this was the start of Don building the super group, which would later include everyone from Paul Carrack to the London Community Gospel Choir. Henry was still alive as this was going on.

That’s when the song started to develop, after Nick. Then I knew I needed to get guitar on it, so through a mutual friend of mine, I got in contact with Albert Lee. […]

From this, the ball was very much rolling. Albert recommended that Don reach out to Chris Stainton, who said he’d happily be part of the project.

Then Henry’s wife Josie introduced me to Dave Robinson, who would’ve been a friend of Henry’s and a founder of Stiff Records. I went for dinner with him and a few drinks and I knew I was mad for trying to do this but I said, ‘Dave, I have a favour, I really want to get Paul McCartney on this’. Everyone told me I was crazy and I’d never get him. But a week or two later, word got back to me from Macca that he loved the song and he really wanted to play on it.

There are still sometimes when I’m on my own in the studio when I’ll listen to Paul McCartney’s bass on the track and think, ‘If anyone brought magic to this track – it was Sir Paul McCartney.’ I have to hand it to him. This wasn’t a rushed job. He put heart and soul into the bass line on the track. It’s absolutely incredible. […] 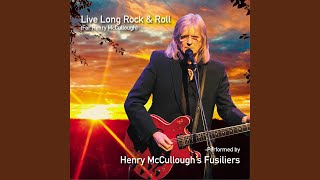