“Mellow Yellow” is a song written and recorded by Scottish singer-songwriter Donovan. In the US it reached No. 2 on the Billboard Hot 100 in 1966. (Both Good Vibrations by The Beach Boys and Winchester Cathedral by The New Vaudeville Band kept it from hitting No. 1.) Outside the US, “Mellow Yellow” peaked at No. 8 in the UK in early 1967.

The song was rumoured to be about smoking dried banana skins, which was believed to be a hallucinogenic drug in the 1960s, though this aspect of bananas has since been debunked. According to Donovan’s notes, accompanying the album Donovan’s Greatest Hits, the rumour that one could get high from smoking dried banana skins was started by Country Joe McDonald in 1966, and Donovan heard the rumour three weeks before “Mellow Yellow” was released as a single. According to The Rolling Stone Illustrated Encyclopedia of Rock and Roll, he admitted later the song made reference to a vibrator; an “electrical banana” as mentioned in the lyrics. This definition was re-affirmed in an interview with NME magazine: “it’s about being cool, laid-back, and also the electrical bananas that were appearing on the scene – which were ladies’ vibrators.”

Paul McCartney can be heard as one of the background revellers on this track, but the “quite rightly” whispering answering lines in the chorus is not McCartney but rather Donovan himself. Donovan had a small part in coming up with the lyrics for “Yellow Submarine“, and McCartney played bass guitar (uncredited) on portions of Donovan’s Mellow Yellow album. […]

Paul McCartney appears somewhere on this track, but it’s not clear where. He was rumored to be the whispering voice saying “quite rightly,” but that was Donovan. McCartney dropped by the session and was captured on tape saying “Mellow Yellow” and doing some cheering. His voice is likely somewhere in the mix at the end of the song amid the revelry.

Donovan had recently helped out McCartney on another “Yellow” song: He provided the “sky of blue, sea of green” line in “Yellow Submarine.” Both songs hit #2 US in 1966.

[This song means] Quite a few things. Being mellow, laid-back, chilled out. ‘They call me Mellow Yellow, I’m the guy who can calm you down.’ [John] Lennon and I used to look in the back of newspapers and pull out funny things and they’d end up in songs. So it’s about being cool, laid-back, and also the electrical bananas that were appearing on the scene – which were ladies vibrators.

Rumor has it that Paul McCartney sang background on “Atlantis.”

Donovan: No. (chuckles) Paul did the “Mellow Yellow” session and added the clap and the giggle. The only thing we ever got close doing was that Mary Hopkin album.

Oh, so yellow
Oh, so mellow 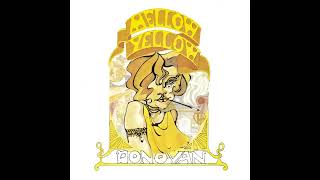