“Tequila” is a 1958 Mexican-flavored rock and roll instrumental written by Daniel Flores and recorded by the Champs. “Tequila” became a #1 hit on both the pop and R&B charts at the time of its release and continues to be strongly referenced in pop culture to this day.

In 1957, Gene Autry’s record label, Challenge Records, signed Dave Burgess (born 1934), a rockabilly singer-songwriter from California who often recorded under the name “Dave Dupree”. At the end of 1957, having produced no hits, Challenge Records looked to Burgess, who organized a recording session on December 23 in Hollywood. In the studio that day were Burgess on rhythm guitar, Cliff Hills on bass, the Flores Trio (Danny Flores on saxophone and keyboards, Gene Alden on drums, and lead guitarist Buddy Bruce), and Huelyn Duvall contributing backing vocals. They gathered primarily to record “Train to Nowhere”, a song by Burgess, as well as “Night Beat” and “All Night Rock” (a song that has never been released).

The last tune recorded was “Tequila”, essentially just a jam by the Flores Trio. It is based on a Cuban mambo beat. The word “Tequila” is spoken three times throughout the tune. There were three takes, and Danny Flores, who wrote the song, was also the man who spoke the word “Tequila!”. Flores also played the trademark “dirty sax” solo. The song served as the B-side for “Train to Nowhere”, which was released by Challenge Records on January 15, 1958. Duvall recalls that the record initially found little success, but, after a DJ in Cleveland played the B-side, “Tequila” skyrocketed up the charts, reaching #1 on the Billboard chart on March 28, 1958.

Daniel Flores had written “Tequila”, but, because he was signed to another label, the tune was credited to “Chuck Rio”, a name he adopted for the stage. Those present for the December 23 session began recording together again on January 20, 1958, under the name the Champs; the group technically formed after recording “Tequila”. […] 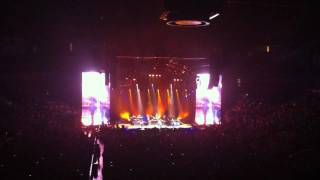 “Tequila” has been played in 3 concerts and 9 soundchecks.

Latest concerts where Tequila has been played