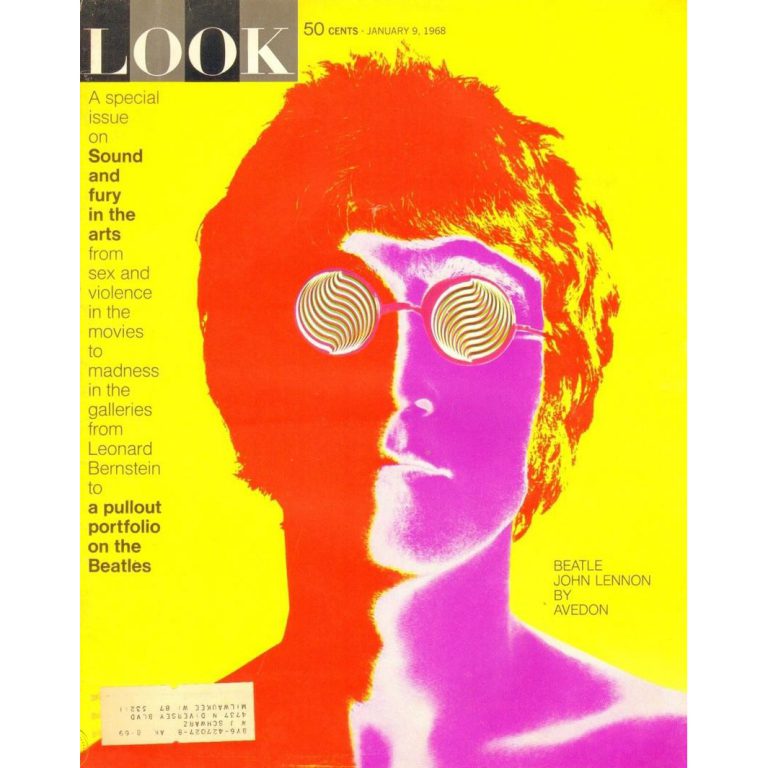 In August 1967, The Beatles were photographed by Richard Avedon. The black and white photos of the four Beatles were transformed into vivid and psychedelic images – and published for the first time in the January 9, 1968 edition of the US magazine Look.

In keeping with the Beatles’ pioneering desire to experiment with unconventional formats in their music and the packaging of their albums, their manager Brian Epstein commissioned Avedon to photograph the band members and design a set of posters that would visually capture the new psychedelic direction of Sgt. Pepper’s Lonely Hearts Club Band and Magical Mystery Tour. Avedon overlaid the solarized prints with Day-Glo colors and symbolic attributes Ringo’s white peace dove, George’s mystical henna patterns, Paul’s flower power, and John’s trippy eyeglasses. The posters were printed in four different countries and released simultaneously through popular magazines for maximum international impact.

A form in the magazine allowed readers to buy posters of the photos, along with a special Beatles banner (“order all four big color posters now and receive a FREE super-size 3 1/2 feet-wide black-and-white Beatle-banner of the whole swinging group“).

In the UK, the Daily Express published those photos in its February 23, 1968 edition.

Those psychedelic photos would later be used for the packaging of the 2000 compilation album, “1”.