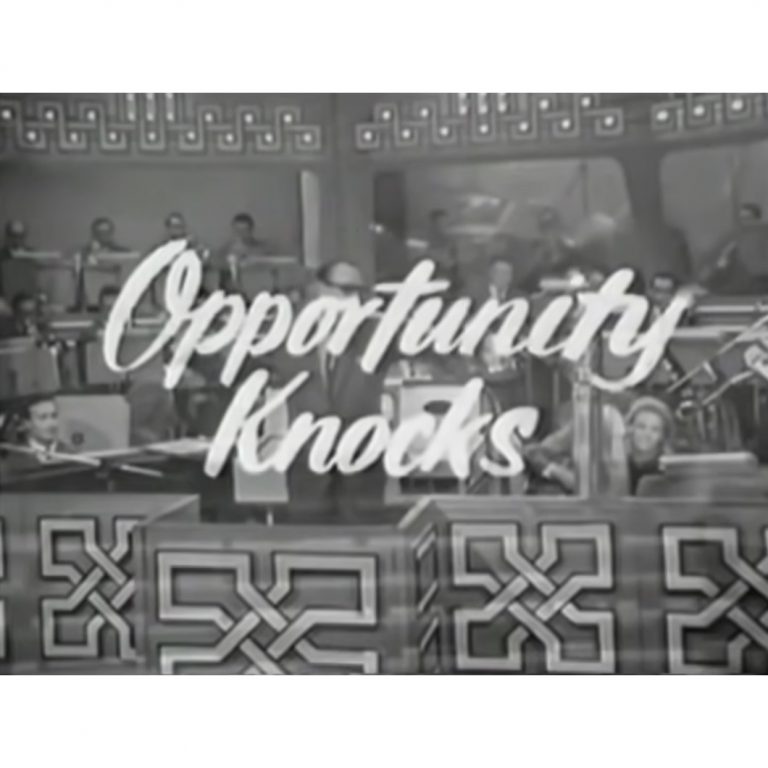 On this day, a young Welsh girl, Mary Hopkin, appeared on “Opportunity Knocks“, a talent show broadcast on the UK TV.

Following this appearance, fashion model Twiggy, who had watched the show, talked to Paul McCartney about Mary Hopkin. He then decided to call Mary Hopkin for an audition. Some months later, this would lead to the release of the first single by Mary Hopkin, “Those Were The Days“, under the recently created Apple Records label.

Opportunity Knocks is a British television and radio talent show originally hosted by Hughie Green, with a late-1980s revival hosted by Bob Monkhouse, and later by previous winner Les Dawson.

A reference to the show can be heard on the Beatles’ first live performance of “Yesterday” at Blackpool Night Out. George Harrison introduces the song, saying “For Paul McCartney of Liverpool, opportunity knocks!”. This version appears on Anthology 2.

In 1988, Mary Hopkin remembers how her appearance on “Opportunity Knocks” led her to meet Paul McCartney and record her first single.

I was a 17-year-old schoolgirl working at weekends with a group of local boys in a folk/rock band, and after about six months the group split up, so I carried on solo. Then my agent, to my absolute horror, put my name down for an audition for Opportunity Knocks, a good show for hopefuls in the music business but not really the sort of thing I wanted to do. But he persuaded me to go along for experience, so I went and sang a couple of songs; and the next thing I heard was that I’d been chosen for one of the programmes.

Rather reluctantly I made my appearance which, amazingly enough, Twiggy watched. She met with Paul McCartney that following weekend and when Paul was chatting to her about the new record label they were forming, Twiggy mentioned me. About two days later I got a telegram saying, ‘Ring Peter Brown at Apple Records’. It sat on the shelf for three days until my mother insisted I ring him.

I was a great Beatles fan so I’d heard all about the Apple boutique, but I didn’t make any connection between the Beatles and this Peter Brown telegram. So I rang up and was put through to this guy with a Liverpool accent, who invited me to come up to London and sign a contract. Being a cautious young Welsh girl, I thought, “That’s a bit sudden!”, and became a bit evasive, so this guy said, ‘Well, go and ask your mum then!’ I dragged my mother to the telephone and she proceeded to practically drop the thing because he said, ‘Oh, this is Paul McCartney, by the way’! I remember racing down the road to tell all my friends who I’d been talking to. The next day they sent a car for us and off I went with my mum to the big city.

We went to the Dick James Music studio. Paul was in the control room and I did a couple of demos for him – Joan Baez and Donovan songs – broke a guitar string and muttered some swear words into the mike. We had lunch – he took us to the Angus Steak House which we were really impressed by – and I sailed through the day in a haze, painfully shy and totally in awe of Paul. I went back home and about two days later somebody rang and said, ‘Yes, we’d like to sign you’. So I made another trip to London and Paul said, ‘I’ve got a song that might suit you. I found it years ago and gave it to Donovan and it didn’t work out, I gave it to the Moody Blues, they loved it but it didn’t happen, and I’ve been looking for the right sound for it.’ Then he strummed this song called Those Were The Days. I loved it immediately, but I must say that I’d probably have liked anything he would have played me at the time! A lot of people think Paul wrote the song, but he didn’t. Anyway, we recorded it a couple of weeks later, and five weeks after the release, in September 1968, I was number one.

She told a similar story in her interview for Goldmine Magazine in 1992.

Your “big break” came on the ITV talent program Opportunity Knocks. What was that like?

Mary Hopkin: It was all terribly, terribly embarrassing at the time. It wasn’t something I wanted to be a party to. But I was sort of (talked) into doing it by the agent who was finding us work while I was still at school. Without my knowledge, he put my name down for this show. I was mortified when I heard he had done it. You can’t condemn that kind of show, because they can do a lot for people, and certainly, it would’ve taken me a lot longer, if at all, to get into the music business, but the whole thing is terribly embarrassing. I did the audition because my agent said it would be a good experience to attend an audition.

Do you remember what you sang on the show?

Mary Hopkin: The first thing I did was “Turn Turn Turn,” the Pete Seeger song. I just went on and did the Joan Baez songs I had learned up to that point. They’re a bit show business for my liking, those light entertainment shows. It smacks of cabaret and summer seasons.

I presume this is where Twiggy comes into the picture.

Mary Hopkin: Hmm, yes. She was watching it, one of the many who do watch that sort of program. I’m not one of them. But I am grateful to Twiggy; she’s lovely and she certainly gave me a momentous start in the music business. I did the show on the day after my 18th birthday; I was still supposed to be studying for my final exams at school, my university entrance exams. Twiggy saw the show, and I think the next day saw Paul McCartney. He was telling her all about the new Apple label. And she said she’d seen this girl on Opportunity Knocks, and he should check me out.

So I received a telegram, two days after the show, which I ignored for a few days. It said, “Ring Peter Brown at Apple Records” and I had never heard of either of them. I was a great Beatles fan, and I’d heard of the Apple Boutique, but nothing else. We didn’t know Apple Records was on the way.

I left it on the shelf for three days, and then my mother said it would be polite to ring back. So I did, and I was put on to whom I thought was Peter Brown. And this chap had a distinct Liverpool accent.

I started wondering at that point, making the connection with Apple but he asked me if I’d come to London and sing for him. I said, well, that depends and he realized I was being very cautious, so he asked my mother to come to the phone. So my mother came to the phone, and he said, “Oh, this is Paul McCartney. Would you like to bring your daughter to London to sing for me?”

That was it really. I was whisked off there the next day and sang for him; we demoed at the little Dick James Demo Studios. I sang a few songs for him; then I was called back about two or three weeks later, and he sang a little song for me, sort of hummed it, and said, “I’ve had this song lying around for years. It’s called “Those Were The Days.'” And he said, “Let’s go in and do it.”

Here is Paul McCartney’s version, from a September 14, 1968 interview in Melody Maker.

“I heard of Mary first in Liverpool. Justin and Twiggy had come up in their new car… showing off again… you know how it is. Well, we were eating our pudding later that evening and we talked about Opportunity Knows and discovery shows generally and I wondered whether anyone ever got discovered, I mean really discovered, on discovery shows.

Then Twiggy said she had seen a great girl singer on Opportunity Knocks and (luckily as it turned out) this was the time we were looking around for singers for Apple Records.

When I got back to London next day, several other people mentioned her, so it began le look as if Mary really was something. Twiggy’s not soft.

So I got her phone number from the television company and rang her at her home in Pontardawe somewhere in Wales, and this beautiful little Welsh voice came on the phone and I said, “This is Apple Records here; would you be interested in coming down here to record for us?

She said, “Well. ‘er, would you like to speak to my mother?” And then her mother came on the line and we had a chat and two further telephone conversations, and later that week Mary and her mum came to London.

I got a phone call from Paul in Liverpool, asking me if I had just seen this great singer on Opportunity Knocks called Mary Hopkin, which I confess I hadn’t. Anyway, I was given the job of tracking her down to where she was, and getting in touch with her, which we did.

We knew already that she was going to be a winner. Paul, by then, had immediately remembered something that I’d even forgot about. About three years earlier, he had found a song called ‘Those Were The Days’, which he thought would be good for The Moody Blues. Paul, there and then, said, ‘I know exactly the song for this girl, ‘Those Were The Days.’