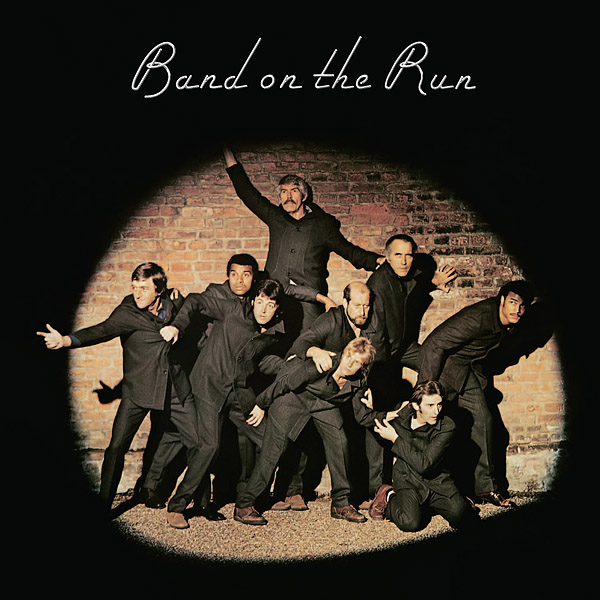 As his car eased into the driveway of one of London’s finest houses, Paul McCartney is unlikely to have realised that he was just five weeks away from releasing his most successful work since the Beatles and, by common accord, his best-loved: the Wings album Band On The Run. He also is unlikely to have realised that the finishing touch he was about to apply to this LP, cassette and cartridge release would swiftly secure a place in the pantheon of The World’s Most Recognisable Pieces Of Cover Art.

The date was Sunday 28 October 1973. Two days earlier Wings, mightily productive, had released ‘Helen Wheels’ as their new single; now they were going to create the sleeve for their second album of the year. Already its recording had proven the veritable triumph in the face of the veritable adversity, for as the five-piece Wings combo were set to fly to Nigeria to begin recording, two of those pieces – drummer Denny Seiwell and guitarist Henry McCullough – informed the other three that they wished henceforth to be forever thought of as ex-Wings. So Paul, Linda and the remaining Denny Laine, went to Lagos as a trio and there – denuded but most definitely stirred – they laid down the tracks that would sell by the crate-load just a few months later as Band On The Run.

The idea for the album cover echoed ever so slightly another record with which Mr McCartney was strongly associated: Sgt Pepper. For that sleeve, back in 1967, four real people had posed among cardboard cut-outs and wax effigies that combined to make up a crowd of famous faces. Now, depicting yer actual band on the run, there were nine famous people, in prison uniform, breaking out of gaol and intending to go – yes! – on the run. About to scale a wall to complete the breakout, however, the nine were framed in the harsh glare of a guard’s searchlight.

Three of these nine comprised the aforementioned Wings trio, the other six were celebrities, certainly recognisable to the British observer, two or three of them known also beyond the UK’s shores. Sleevewise, left to rightwise, the Band trying to Run numbered Michael Parkinson (the journalist best known for his Saturday-night TV chat show), Kenny Lynch (the singer, friend, occasional actor and TV wagster), James Coburn (the American actor – he happened to be in Britain at the time filming The Internecine Project), Clement Freud (the gourmet, raconteur and wit who later went into politics), Christopher Lee (the actor best known for his Dracula movie roles) and John Conteh (the boxer from Liverpool who went on to become Light-Heavyweight champion of the World).

All six had been summoned to Osterley Park in west London, a mere vapour trail away from Heathrow Airport, where – in the landscaped, lake-dotted 140-acre grounds of the 16th century Osterley House – a brick wall adjacent to a gravel path had been selected as the prime location for the cover photo. One by one the Band wishing to Run arrived, to find not only the McCartneys and their chosen photographer, Clive Arrowsmith (he also shot the cover photos for Wings At The Speed Of Sound, Wings Greatest and Off The Ground) but also a film crew from London company Newglade Productions, recording the events on to 16mm stock.

Handily, or perhaps it wasn’t a coincidence, Sunday 28 October was the first date of 1973 British winter time, Britons having turned back their clocks by one hour just the night before. This meant that the darkness necessary for the shoot fell quickly, late in the afternoon, shortly after the prisoners-to-be had arrived and made rendezvous in a locker room inside Osterley House. A goodly quantity of 16mm film was shot in here – before, during and after the nine changed into the garb they would wear for the shoot.

While Linda moved around the room taking Polaroid photographs (and occasionally being thwarted by temperamental flashbulbs) Paul chatted comfortably with Conteh and Parkinson, jested with Parkinson’s children, who had come along to watch the fun, and prompted a brief ‘Misery’ duet with Kenny Lynch that turned back the calendar ten years – Lynch had been the first artist to record a cover version of a Lennon-McCartney song when, in March 1963, he released the Please Please Me track as a single simultaneous with the Beatles’ own version. Linda then grouped together half a dozen of the nine for an informal shot that prompted Paul to jest “This is the cover. Forget the prison outfits!” If this easy-going atmosphere conveys a sense of confidence in what was to follow, then it ought not, for it seems that none of the six celebrity invitees knew precisely what was in store for them. So it was on a need-to-know basis that Clement Freud sidled up to Paul and asked him, blankly, “What do you have in mind?”. “Prison,” Paul replied, in a single word. “A mixed prison?” “No.” “No women?” “No. Well, there is one” Paul responded, pointing to his partner, “but we’re going to have to do her over”.

Suitably “done over” – her face made pale and her long hair tucked under the prison garb, that is – Linda looked of a kind among the eight males as they took up their positions in front of the brick wall. Clive Arrowsmith ran the show from here on, perched up a ladder and bawling instructions at his famous convicts by way of a megaphone.

“Get those children off the wall.”

“Are they stuck up there?”

“OK, everyone, react as if you’ve just all been caught by the light.”

“You really must stay very still for that one second, please”.

As one might expect, the perfect shot was not the first to be taken, and a good roll or two of film was exposed so that the best image could be selected later. (Look out for some subtly alternate outtake photographs on this page.)

Although the light was limited – had the film crew added extra lighting it would have spoiled Arrowsmith’s own rig – the wisdom in having the event shot on to movie film is proven when viewing the resulting footage, for what appear to be still photographs suddenly and most delightfully come to life. Audiences on the 1975/76 Wings world tour will remember how what appeared to be the Band On The Run cover image, projected on to a stage backdrop during performances of the song, most effectively began to move in this way.

Said back-projection was about the most profitable use of the Osterley Park film – being seen by audiences around the world and in the two tour movies Wings Over The World and Rockshow. But selected highlights from the total 26 minutes of Osterley rushes also went into an extended promotional film for Band On The Run made in 1975. Running close on eight minutes, visualised by Clive Arrowsmith and produced under the banner GSP by the art directors Storm Thorgerson and Gordon House (Paul’s painter friend who helped him design the McCartney album sleeve in 1970 and, for a while, employed CS designer Roger Huggett), the film embraced extracts from the title song, ‘1985’, ‘Mrs Vandebilt’ and ‘Bluebird’ and combined some of the moving images from Osterley with animation and still photographs. Whether this belated promo prolonged sales is difficult to say, but record-store tills around the world had long been ringing the sound of success for Band On The Run … with millions of copies of that album sleeve being appreciated alongside the music.

ON THE RUN: WINGS AND FAMOUS FACES. BAND OF FRIENDS SO JUST how did ex-Beatle Paul McCartney persuade Clement Freud, Michael Parkinson, James Cobu r n, Christopher Lee, boxer John Conteh and Kenny Lynch to don convict garb and pose for a picture, along with the other members of his group Wings to illustrate the sleeve of his latest L P ” Band on the Run ” ? Said one of McCartney’s men: “He invited them all to lunch. They are all people he likes. After lunch they went out to Osterley Park to shoot the pictures?’ Face-dropping rather than name-dropping is the name of this game.

You've spel Beatle as Beetle in the transcript of the Mirror article.

Thanks for noticing, this has been fixed !