The perambulations of Percy Thrillington 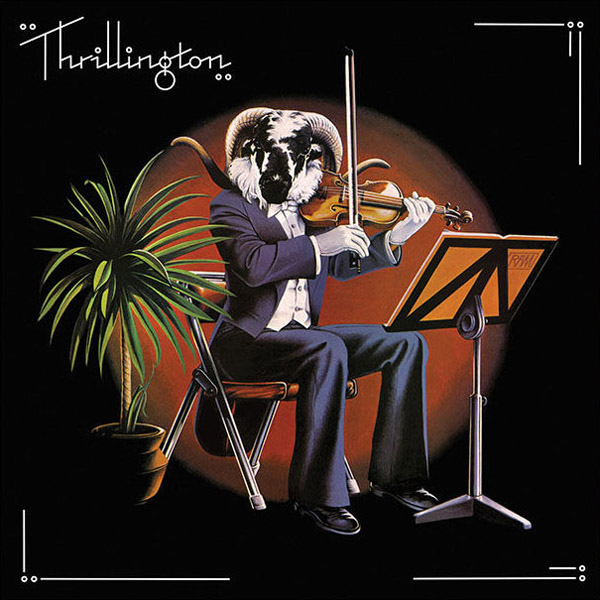 For a great many McCartney fans the big question of the past 15 years is: were you PERCY THRILLINGTON?

Yes, it’s been a bit of a mystery for a long time. We always told people that I wasn’t Thrillington and really kept that one going.

It all came about because I wanted someone to do a Big Band version of Rain – but seeing as there were no takers I thought that I’d better be that someone! So we invented it all, Linda and I, and we went around southern Ireland and found a guy in a field, a young fanner, and asked if he minded doing some photographic modelling for us. We wanted to find someone that no one could possibly trace, paid him the going rate and photographed him in a field, wearing a sweater and then wearing an evening suit. But he never quite looked Percy Thrillington enough…

Then we started this whole business in the Evening Standard ad columns, which was the really fun thing, putting in things like “Must get in touch with … Thrillington”, as a result of which the newspaper columns picked up on it – “Has anyone seen this rubbish going on in the Standard about Percy Thrillington?” – and it was good publicity. It was one of our madcap publicity schemes, as if we were managing this character called Percy Thrillington. But it was really just an excuse to do a Big Band album. And now the truth can finally come out.

PERCY THRILLINGTON Is alive and well and living in the country. But he has been gadding about somewhat, hence frequent messages in the personal columns of the Evening Standard and The Times.

Percy, dear boy, merely wants all his masses of chums to know where he has been.

Astute readers of the personal ads will know that the past few weeks, since St Valentine’s Day to be exact, Percy’s life has been frenetic.

He’s been to Rio de Janeiro Mustlque (of ooune) and recently informed us through this rather public medium that he was enjoying the invigorating sir on his Swiss suing holiday What he hasn’t bothered to Sir Harold teU us is that while being invigorated at Gstaad he slipped rather dramatically and broke a rib That la why he will not personally be attending Christie’s-sale of Old Masters today He will be represented by someone chosen by his secretary Penelope Telfer-SmallettL The Times Is getting used to the calls Every day it seems curious readers and ethers telephone demanding to know more about this man Up In Classified there they firmly believe in him He really does live In the country they say and then very quietly “We think he’s a bit well eccentric but don’t quote me will yout” On to Cream an advertising agency in Kensington The lady who deals with Mr Thril- : I had lington Is not there but yes he does exist and it is a bit odd isn’t ltf i Thrillington however is not a common name and those with an absurd memory for the trivial Irrelevancies of life may recall that in 1971 the newly-formed McCartney Productions signed as their first artist one Percy Thrillington an Irish bandleader The girl at McCartney lies a bit at Percy’s name refers our call to publicist Tony Bralnsby He has a file on Percy “Thrills” Thrillington The biography makes good reading Percy was ban in Coventry Cathedral In 1939 Studied music for fire yean in Baton Rouge “cm the trot ” mastered his bade In Los Angeles and ’then came to London to fulfil his life’s ambition Aided by his great and unexplained wealth he formed an orchestra He lives hi a flat In Curzon Mews and at a Manor House near Newbury (no full address cant have fans coining to tea) and although elusive may attend the Cheltenham Gold Cup tided by ope he nas slaved between trips over the last six years producing a long-plaj ‘ record of some of Mr ney’s music the efficient Penel- In case the picture Isn’t coming any clearer yet the record— it’s a pity but it had to be something like that didn’t it?— is due’ to be released non Hence the ads “Oh no says Bralnsby bravely “he really just likes to keep in touch” And by way of an afterthought remembers to add to make a record of his compositions Today’s instalment — Page 10

PERCY THRILLINGTON wishes to state that Health & Happiness Week has proved a big success & wishes to thank everyone for their kind participation. All readers are earnestly implored to continne then good efforts today by not wasting their free time.

PERCY THRILLINGTON will be in Paris today to advise his dear friend from the world of fashion on the design & musical presentation of her new collection.

PERCY THRILLINGTON would like to thank Oliver & Richard for all their help & endeavours.

PERCY THRILLINGTON has been persuaded to prolong his stay in Parys as he finds the springtime atmosphere most conductive to musical creativity.

PERCY THRILLINGTON will today be attending the Berkley Dress Show as he is assured that “Admiral Halsey,” a single taken from the “Thrillington” LP will be featured extensively.