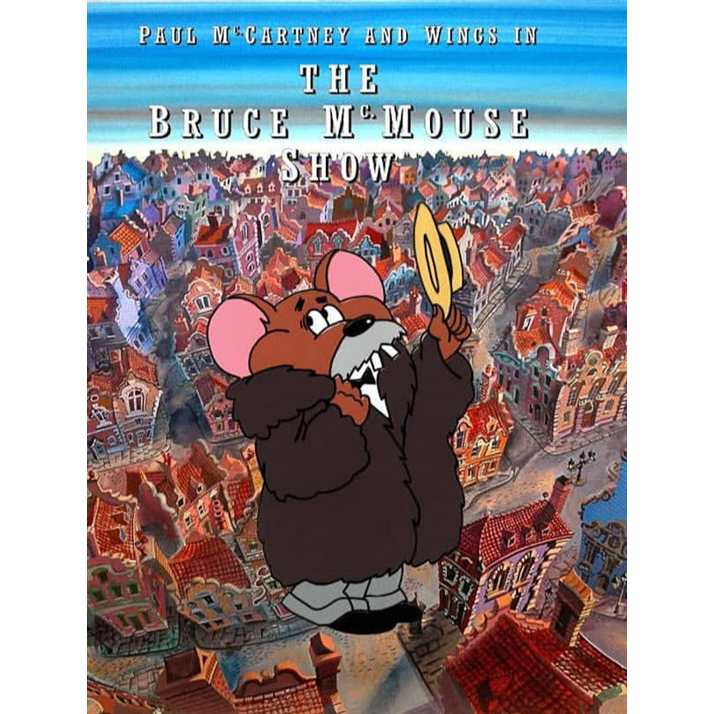 2018 • For Wings • Directed by Barry Chattington

The Beatles & Co. partnership is dissolved

Paul McCartney to be judged in March 1973 in drug case

Some original drawings by Paul McCartney from the never-seen project “Bruce McMouse” were to be auctioned by the Dominic Winter auction house, on June 16, 2011.

The Bruce McMouse Show is a topic of much mythmaking and hearsay among Paul McCartney fans. It was intended as a one-hour part-animated film for ITV with two advert breaks and the film was made but never shown. Paul McCartney owns the master copy of the film and the idea for the project seems to have been entirely his own. […] The idea of this film was to show concert footage from the Wings Over Europe tour of 1972 interspersed with animation action relating to cartoon character Bruce McMouse and family living under the floorboards of the stage. Although it was completed it’s never been shown and probably didn’t stand up to McCartney’s high standards. But the drawings are very interesting and show how the characters were developed. The 26 pictures include one of a walrus and several probably drawn by Linda or her daughter Heather.

These are an amazing piece of lost Paul McCartney history and it’s been a fascinating process working out the chronology of the drawings. The drawings range from subconscious doodlings through technical facial characterizations, humorous diversions of comic characters including a walrus not used in the film, to fully finished drawings of Bruce McMouse and family.

The Bruce McMouse and related characters were designed when McCartney & family were on holidays in Antigua, in 1973. The drawings were kept in the archives of Eric Wylam who was the animator of the movie. When he died in 1997, his daughter Maggie Thornton inherited them and finally put them to sale:

My father did all the animation for the film but never got to see it at the time. When he fell ill in about 1993 I wrote to Paul McCartney asking if there was a way that my father could see the finished film. And he sent the video which my father watched. I have seen it and can see why it was never released. The storyline doesn’t really work and some of the cutting between the singing and the animation isn’t very good. My father didn’t like the music – he was into classical music and I’m not really sure what he thought of the film, although he didn’t say he didn’t like it.

The drawings were finally withdrawn from sale, the day before the auction was scheduled, after Paul McCartney’s lawyers intervened.

The lawyers say they’re still Paul McCartney’s property as the film was made by his company MPL Communications. As such any work done by Paul or the team working on the film should have been returned to MPL or Paul at the end of its usage. But this is contrary to what Maggie believes and what her father always told her. […]

As far back as March we were emailing, writing and sending scans of all the images [to MPL Communications] explaining where they’d come from and asking whether there was any good reason why they shouldn’t be sold and we heard nothing. […] We’ve got to make sure that according to the law we give them back to their rightful owner, be that Maggie herself or Sir Paul McCartney and MPL Communications.

My father was given a pile of scrap paper covered in rough drawings and I always believed they belonged to my father. […] Hopefully it’s all just been a misunderstanding.

“The Bruce McMouse Show” movie would finally be released in 2018, as part of the release of the “Red Rose Speedway – Archive Collection“.