Timeline See what happened in 2011

Sessions This album has been recorded during the following sessions

One Of These Days

You Know I'll Get You Baby

3:23 • Studio version • A5 • DJ Edit, a shorter edit of the album track, featured on the Wingspan album

MPL and the Concord Music Group are pleased to announce McCartney and McCartney II as the next releases in the Paul McCartney Archive Collection on June 13th, 2011. Heralded as one of the most beloved solo debuts of all time, McCartney, the smash # 1 album, originally released April of 1970, yielded the timeless tracks “Every Night” and “Junk” along with the immortal classic “Maybe I’m Amazed.” McCartney II originally issued in May of 1980 was McCartney’s return to solo work after nine years touring and having released several massively successful albums with Wings. Reaching #1 in the UK, and #3 in the U.S., the album produced enduring classics such as “Coming Up,” “Waterfalls,” & “Temporary Secretary.”

Paul McCartney personally supervised all aspects of these two reissues. The remastering work was done at Abbey Road using the same team who recently remastered the complete Beatles’ catalogue.

Both McCartney and McCartney II will be available in a variety of formats originating with the single disc digitally remastered Standard Edition version of each album.

McCartney will also be made available as a 2-disc (2 CD) Special Edition featuring the original remastered album plus seven bonus audio tracks including the previously unreleased outtakes “Suicide” and “Don’t Cry Baby” plus a rare live 1979 recording of “Maybe I’m Amazed”. For collectors, the reissue will additionally be made available as a lavishly packaged 3 disc (2 CD, 1 DVD) Deluxe Edition which includes an exclusive bonus DVD featuring rare and previously unseen footage, an extraordinary 128-page hard bound book containing many exclusive and unpublished photos by Paul and Linda McCartney, original album artwork, downloadable hi-res audio versions of the remastered album and bonus audio tracks, an illustrated history of the making of the album, and expanded track by track information for the two audio discs as well as detailed historical information on the film content.

McCartney II will also be made available as a 2-disc (2 CD) Special Edition featuring the original remastered album plus eight bonus tracks including B-Sides and alternative versions. The bonus audio CD includes the #1 hit “Coming Up (Live At Glasgow, 1979)” and holiday perennial “Wonderful Christmastime.”

The lovingly packaged 4 disc (3 CD, 1 DVD) Deluxe Edition of McCartney II not only includes an exclusive bonus DVD featuring rare and previously unseen footage (including performances of ‘Coming Up’ and the new video for the unreleased track ‘Blue Sway’) but includes an additional eight rare bonus audio tracks exclusive to this edition. Additionally, the McCartney II deluxe edition contains an extraordinary 128-page hard bound book featuring many previously unpublished photos by Linda McCartney, original album and single artwork, downloadable hi-res audio versions of the remastered album, an illustrated history of the making of the album, and expanded track by track information for all three audio discs plus detailed historical information on the film content.

Both original remastered albums and bonus audio content will also be issued as 2 disc 180gm audiophile vinyl editions which will come with an MP3 download of all included audio. Lastly, the special and deluxe versions of McCartney and McCartney II will be made available digitally worldwide.

The musical achievement of McCartney and McCartney II are noted in the annals of music history as they serve as bookends to the historic first chapter of McCartney’s solo career.

McCartney & McCartney II mark the second and third releases from the Paul McCartney Archive Collection, an ambitious reissue program that encompasses 41 years of cherished, classic material from the most successful songwriter and recording artist in music history. In November of 2010, the inaugural title in the Archive Collection, Paul McCartney & Wings’ 1973 classic Band on the Run was released to worldwide acclaim. 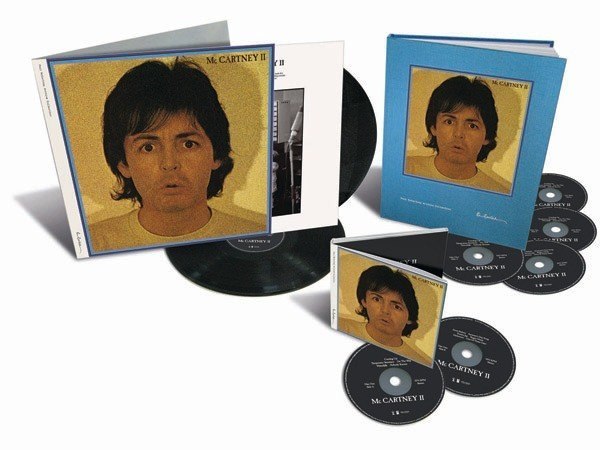