Other outtakes from "McCartney II"

You Know I'll Get You Baby

“Blue Sway” is a song written and performed by Paul McCartney, recorded during the sessions for “McCartney II” in 1979. It remained officially unissued till the the re-edition of “McCartney II”  in 2011, as part of the Archive Collection.

Paul McCartney recruited award-winning surf filmmaker Jack McCoy to create a music video for his previously unreleased track “Blue Sway.” Written nearly 20 years ago, McCartney’s never-before released song, “Blue Sway,” is available for the first time on the bonus audio disc of the special edition of McCartney II. The music video created by McCoy is also featured on the bonus DVD included in the set. McCartney II will be released on June 14th by MPL and Concord Music Group.

Jack McCoy has been capturing the surfing vision in a truly unique way. Using a high powered underwater jet ski, the filmmaker found that he was able to travel behind a wave, creating underwater images that have never been seen before.

Over the past couple of years, McCoy set out to capture footage for his surf film, A Deeper Shade of Blue. During the editing process, McCoy put one of his surfing sequences to a song off McCartney’s The Fireman album. A mutual friend, Chris Thomas, saw the footage while visiting McCoy in Australia, and when he returned to the UK he gave McCartney a copy of the sequence.

“Paul was pretty stoked with what I’d created. He immediately thought my images might be suitable to go with his unreleased song “Blue Sway.” said McCoy.

McCoy spent the next six weeks creating the music video, while also working full days on making A Deeper Shade of Blue. McCoy compiled and edited footage that he filmed off Tahiti’s Teahupoo reef to create what became the “Blue Sway” video.

“When I saw Jack McCoy’s underwater surfing footage put to the soundtrack of “Blue Sway” I was blown away,” said McCartney.

“Blue Sway” won ‘Best Music Video’ at NYC BE FILM Short Festival this past May, and the video will be featured as part of Surfrider Foundation’s summer PSA campaign. Surfrider Foundation is a non-profit grassroots organization dedicated to the protection and enjoyment of our world’s oceans, waves and beaches.

[…] This was the album where I felt like the nutty professor in his laboratory. Some of the tracks, there’s one in particular, ‘Secret Friend’, and another one, ‘ Blue Sway’, that go on for like 10 minutes. I just got into it. Now, that’s all very well when you’re doing your first take. But then you’ve got to put a cow-bell on it and I would sit there in real time and put a cow-bell on for 10 minutes, occasionally glancing at my watch, and I’ve got five more to go: dink-dink, dinka dink-dink… Your thoughts come swimming in: “Are you kidding me? You’re really gonna stand here and do this? Why don’t you just do the cow-bell on that bit? No, I’ll mix it out later,” which of course you never do. “Right! Now we’ll do maracas!” Ch-ch-ch-ch, looking at the watch again. 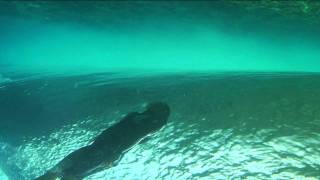 Hi, I was wondering if you knew what the lyrics are for this song? I find it gorgeous, but the lyrics are nearly impossible to make out so I wanted to see if I could find them here.

Hi Katie,
Unfortunately the lyrics have not been published and we are left with guesses. A user of the official maccaboard has suggested the following ones :

Any time that you want, I know
How it feels when outside I go,
I sleep... with tears all around
Anyway, you're the one I see
What d'you feel you've done to me?
I feel blue sway
Blue sway
All day blue sway now

Thank you very much. I understand that there isn't any official lyrics, but those sound pretty accurate.

Blue Sway is included in the soundtrack of the 2012 film Frances Ha: https://www.discogs.com/Various-Music-From-The-Motion-Picture-Frances-Ha/release/5181951