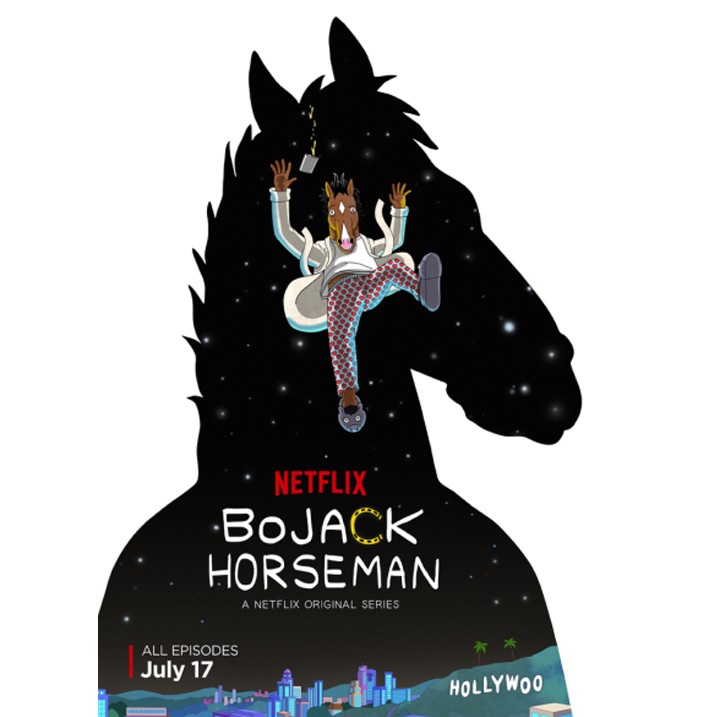 Paul McCartney made a cameo appearance in the animated sitcom “BoJack Horseman“, in the episode 4, season 2, which was released on Netflix on this date. It wasn’t the first time McCartney appeared in an animated series; in 1997, he and his wife Linda appeared on an episode of The Simpsons.

BoJack Horseman is an American adult animated tragicomedy sitcom created by Raphael Bob-Waksberg. It stars the voices of Will Arnett, Amy Sedaris, Alison Brie, Paul F. Tompkins, and Aaron Paul. Set primarily in Los Angeles, the series tells the story of an anthropomorphic horse named BoJack Horseman (Arnett), the washed-up star of a 1990s sitcom who plans his return to celebrity relevance with an autobiography to be written by ghostwriter Diane Nguyen (Brie). He also has to contend with his agent Princess Carolyn (Sedaris), roommate Todd Chavez (Paul), and former rival Mr. Peanutbutter (Tompkins), as well as his struggles with depression and addiction. The show is designed by cartoonist Lisa Hanawalt, who has been friends with Bob-Waksberg since high school and had previously worked with him on the webcomic Tip Me Over, Pour Me Out.

The series premiered on Netflix on August 22, 2014. On September 20, 2018, Netflix renewed the show for its sixth and final season, and the series ended on January 31, 2020, with a total of 77 episodes. The first five seasons consist of 12 episodes each, while the sixth and final season consists of 16 episodes divided into two parts of eight episodes each. A one-off Christmas special was also released on December 19, 2014.

Despite mixed reviews upon its debut, critics were significantly more positive towards the second half of the first season, and the subsequent seasons received widespread critical acclaim. GQ magazine hailed the show as one of the best of the decade, and IndieWire ranked BoJack Horseman as the greatest animated television series of all time. The show has been lauded for its realistic take on depression, trauma, addiction, self-destructive behavior, racism, sexism, sexuality, and the human condition. The series received numerous accolades, including four Critics’ Choice Television Awards for Best Animated Series, three Annie Awards and two Writers Guild of America Awards. It also received three Primetime Emmy Award nominations, including two for Outstanding Animated Program.

From How ‘BoJack Horseman’ got Paul McCartney to cameo (businessinsider.com), July 17, 2015:

Netflix’s original animated series “BoJack Horseman” has landed some huge names to lend voices to the show. During its short run, it has gotten Oscar-winning actor J.K. Simmons to play a tortoise and Naomi Watts to play herself.

In the fourth episode of season two, entitled “After the Party,” it landed its biggest star to date.

In the episode, Mr. Peanutbutter (Paul F. Tompkins) throws his wife Diane (Alison Brie) a surprise party, despite the fact that she hates both surprises and parties. The party is immediately ruined after they get into a big fight.

Throughout the episode, it’s hinted that Paul McCartney is hiding inside a giant birthday cake.

Throughout the entire episode a potential McCartney appearance is teased, but you don’t think much of it.

Then in the episode’s final moments, long after the party ended, McCartney actually bursts out of the cake, but no no one’s around to see or know he was there.

He has a few quick lines.

“Surprise!” McCartney sings before noticing everyone has left.

“Hello? Anybody? This is Paul McCartney,” he says.

Disappointed, he gets out of the cake.

“I came all this way to jump out of a cake? Honest. With a new suit on. Aye-yai-yai,” he says before the episode ends.

It might be hard to believe, but as revealed in the credits, that is, indeed, former Beatle Sir Paul McCartney.

“BoJack” creator Raphael Bob-Waksberg was so uncertain McCartney would actually lend his voice to the show, that he had a backup cameo of sorts planned.

“A lot of our celebrities who kind of play themselves … we don’t really know who its gonna be,” Bob-Waksberg told Business Insider. “It’s kind of an ‘insert celebrity here’ situation. Someone’s gonna be in that cake and jump out. We talked like ‘Who’s the celebrity gonna be’ and at first we had Kevin Bigley who did a lot of voices on our show. He kind of did an impression of Michael Bublé which is really funny. And then we got this email from Linda [Lamontagne] our casting director saying ‘Hey, I think we can get this guy [Paul McCartney].’ And I was like, ‘No way! I don’t believe you! We’re sticking with the Michael Bublé impression.'”

While Bob-Waksberg had his doubts about whether or not McCartney would actually come on the show, casting director Linda Lamontagne used the word “tenacity” when describing how she eventually got McCartney to appear on the show.

“It’s the material … it’s the script … the scripts are so good on this show that they [McCartney’s company] did respond.” Lamontagne told Business Insider. “It took a little bit and we sort of had to wait it out for when we could get him and we were fortunate to be able to record him when he was in New York.”

It was a cameo so surprising that even Bob-Waksberg didn’t know it was going to happen until the last second.

“I was driving to work one day and I stopped for a smoothie and I was waiting for my smoothie and I got a call from Noel Bright, our executive producer, who said, ‘Hey, did you get that email this morning?’ And I said, ‘No, what email?’ And he said ‘Yeah, he’s [McCartney’s] recording today. He’s calling in in five minutes. You need to get over here.’ And so I ran out of the smoothie place, got into my car and raced to the studio.” recalled Bob-Waksberg.

Bob-Waksberg eventually made it to the office on time to record McCartney (he describes the musical legend as “a real sweetheart”).

Typically, “Bojack Horseman” is made in Los Angeles. When they use voices of actors who live in other cities, they will typically go to a studio in whatever city they live in and Bob-Waksberg will direct them over the phone. However, they bent the rules a bit for McCartney.

“With him, because he’s such a big star, we actually sent a guy with a microphone to his house. That’s some real special treatment.” said Bob-Waksberg.