The World You're Coming Into / Tres Conejos

Save The Child / The Drinking Song

Paul McCartney releases his new full-length work of classical music Ecce Cor Meum through EMI Classics on 25th September 2006. Ecce Cor Meum (Behold My Heart) is Paul’s fourth classical album since his first release in 1991, The Liverpool Oratorio. Ecce Cor Meum has been more than eight years in the making and its origins follow in the historic tradition of composers commissioned to write music for the world-renowned Magdalen College Oxford.

Paul was invited by Anthony Smith (President of Magdalen College 1998 2005) to compose something to set the seal on a new concert hall for the college. His hope was for a choral piece which could be sung by young people the world over in the same way that Handels Messiah is. Ecce Cor Meum is a work for choir and orchestra in four movements. The text combines both English and to a lesser degree, Latin. Paul’s knowledge of Latin comes from his classical education at The Liverpool
Institute High School for Boys, where he had learnt three languages by the time he was 12. Paul says: “Not all of this has been retained over the years as my path went in other directions, but my love of language remains, and as Latin is known and sung by choirs all over the world, I felt it would be appropriate to use at times during the piece“. Paul started with the music and then looked for a subject. Several ideas for lyrics occurred to him, but they only gelled when he took part in a concert of John Tavener’s music in the Church of St Ignatius Loyola in New York. “While I was waiting to do my bit, I was looking around the church and I saw a statue, and underneath it was written Ecce Cor Meum. I had done some Latin at school and I always had a fondness for it. So I worked it out. I believe it means Behold My Heart“.

In November 2001, the first version of Ecce Cor Meum was given its preview performance by the Magdalen College Choir, conducted by Bill Ives at the Sheldonian Theatre, Oxford. This was a great learning experience for Paul. “Eventually, I made it all come together through correcting a lot of misapprehensions. A lot was learned before the Sheldonian performance, but a lot of it was learned afterwards. An experienced choral composer knows that children can’t be given huge sustained passages; they don’t have the energy and the stamina. At the Sheldonian, there was some quite hard stuff that I didn’t realise
because I’d done it on the synthesiser (which has endless stamina!), but during that first performance, the solo treble couldn’t come on for the second half I think I’d used him up in the first half! These are things that people either learn because they are taught them immediately at the first lesson or you learn through the years, so it was good to go through the piece a lot of times, and we took out huge choral sections and gave them to the orchestra. If it had been a Beatles song I would have known how to do it. But this was a completely different ball game“.

Produced by John Fraser, Ecce Cor Meum was recorded this year at the legendary Abbey Road Studios between March 13th and 17th. It was performed by EMI artist Kate Royal (soprano); The Boys of Kings College Choir, Cambridge; The Boys Of Magdalen College Choir, Oxford; London Voices and The Academy Of St Martin In The Fields and conducted by Gavin Greenaway.

Ecce Cor Meum (Latin for Behold My Heart) is the fourth classical album by Paul McCartney. The album was released on 25 September 2006 by EMI Classics. An oratorio in four movements, it is produced by John Fraser, written in Latin and English, and scored for orchestra and boys and adult choir. The oratorio was partly inspired by Sir Paul’s wife Linda. lt is also the only classical album by McCartney that was not released on vinyl.

The title was inspired by the inscription McCartney noticed above a statue of Jesus in St. Ignatius Church, New York City. The reference in the church context is to the Sacred Heart of Jesus, although McCartney freely adapted the text for use in his composition. Upon Sir Paul’s grant of arms, he adopted “ECCE COR MEUM” as his motto.

Ecce Cor Meum had been more than eight years in the making and its origins follow in the tradition of composers commissioned to write music for Magdalen College, Oxford. Sir Paul was invited by Anthony Smith (President of Magdalen College 1998–2005) to compose something to set the seal on a new concert hall for the college.

The composition was delayed by the death of Sir Paul’s wife, and could not be used for the opening of the new auditorium (which was celebrated instead by a premiere of Tony Harrison’s verse film, “Prometheus“). The project did not die: with encouragement from the then Oxford University Music Society president and perseverance by the College itself, the work was finished and eventually performed in the Sheldonian Theatre, Oxford, in November 2001.

Originally, it was presented in 2001 with the full Choir of Magdalen College, Oxford, conducted by Bill Ives, in the Sheldonian Theatre, Oxford. Sir Paul McCartney expressed in the programme his hope “that this piece will carry the name of Magdalen to all parts of the globe and help to make people aware of the noble institution that it is“.

Produced by John Fraser, Ecce Cor Meum was recorded at Abbey Road Studios between 13 and 17 March 2006. It was performed by soprano Kate Royal, the boys of Magdalen College Choir, Oxford, the boys of the Choir of King’s College, Cambridge, London Voices and the Academy of St Martin in the Fields, conducted by Gavin Greenaway.

Its American première was 14 November 2006 at a sold-out Carnegie Hall in New York City. Scored for choir and orchestra, the Orchestra of St. Luke’s under Gavin Greenaway joined the Concert Chorale of New York and the American Boychoir, with soprano Kate Royal and Andrew Staples as soloists. The concert was simulcast over WNYC-FM, New York Public Radio and webcast over wnyc.org.

The Canadian première took place on 27 October 2007 at Metropolitan United Church in London, Ontario. Conducted by Toronto conductor Robert Cooper, it was performed by the combined forces of the Orpheus Choir of Toronto, Chorus Niagara, London Pro Musica, the Amabile Treble Choir and Orchestra London.

On 3 May 2007, Paul McCartney was presented with the Best Album Award at the Classical Brits for Ecce Cor Meum, at the Royal Albert Hall. The award was voted for by readers of Classic FM magazine and listeners of Classic FM. The album reached number 2 in the Top Classical Albums charts from the US 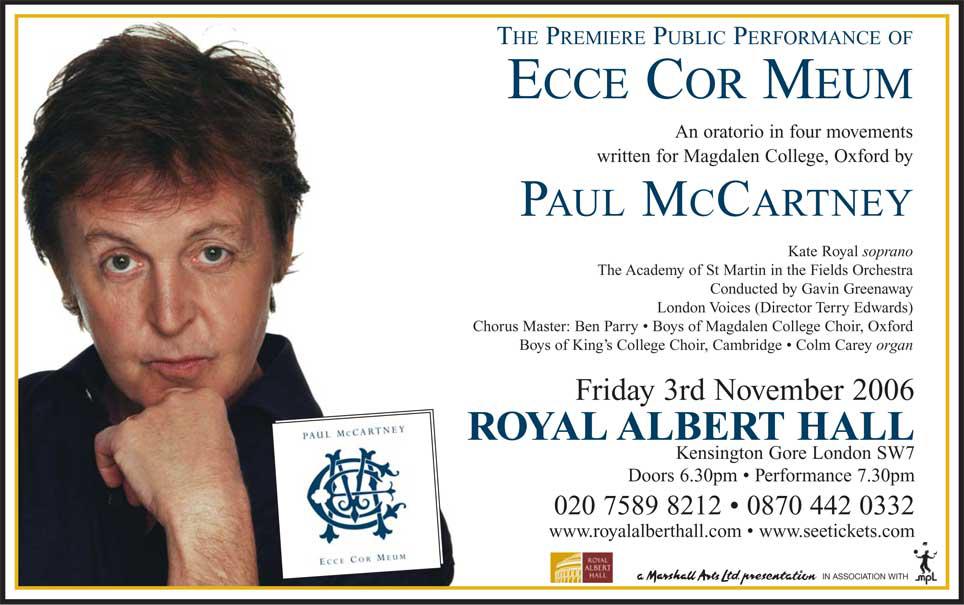 I'm just listening to it for the first time! I'm a middle school/high school choir director. This has been in my Apple Music library, but I'd never had time to listen to it! It is so beautiful! I always knew Paul McCartney was talented. I had no idea that his talent extended into the classical realm. I'm stunned! Thank you so much for this amazing music.