Charles Edward Anderson “Chuck” Berry (October 18, 1926 – March 18, 2017) was an American guitarist, singer and songwriter and one of the pioneers of rock and roll music. With songs such as “Maybellene” (1955), “Roll Over Beethoven” (1956), “Rock and Roll Music” (1957) and “Johnny B. Goode” (1958), Berry refined and developed rhythm and blues into the major elements that made rock and roll distinctive. Writing lyrics that focused on teen life and consumerism, and developing a music style that included guitar solos and showmanship, Berry was a major influence on subsequent rock music.

Born into a middle-class African-American family in St. Louis, Missouri, Berry had an interest in music from an early age and gave his first public performance at Sumner High School. While still a high school student he was convicted of armed robbery and was sent to a reformatory, where he was held from 1944 to 1947. After his release, Berry settled into married life and worked at an automobile assembly plant. By early 1953, influenced by the guitar riffs and showmanship techniques of the blues musician T-Bone Walker, Berry began performing with the Johnnie Johnson Trio. His break came when he traveled to Chicago in May 1955 and met Muddy Waters, who suggested he contact Leonard Chess, of Chess Records. With Chess he recorded “Maybellene“—Berry’s adaptation of the country song “Ida Red“—which sold over a million copies, reaching number one on Billboard magazine’s rhythm and blues chart. By the end of the 1950s, Berry was an established star with several hit records and film appearances and a lucrative touring career. He had also established his own St. Louis nightclub, Berry’s Club Bandstand. But in January 1962, he was sentenced to three years in prison for offenses under the Mann Act—he had transported a 14-year-old girl across state lines. After his release in 1963, Berry had several more hits, including “No Particular Place to Go“, “You Never Can Tell“, and “Nadine“. But these did not achieve the same success, or lasting impact, of his 1950s songs, and by the 1970s he was more in demand as a nostalgic performer, playing his past hits with local backup bands of variable quality. His insistence on being paid in cash led in 1979 to a four-month jail sentence and community service, for tax evasion.

Berry was among the first musicians to be inducted into the Rock and Roll Hall of Fame on its opening in 1986; he was cited for having “laid the groundwork for not only a rock and roll sound but a rock and roll stance.” Berry is included in several of Rolling Stone magazine’s “greatest of all time” lists; he was ranked fifth on its 2004 list of the 100 Greatest Artists of All Time. The Rock and Roll Hall of Fame’s 500 Songs That Shaped Rock and Roll includes three of Berry’s: “Johnny B. Goode“, “Maybellene“, and “Rock and Roll Music“. Berry’s “Johnny B. Goode” is the only rock-and-roll song included on the Voyager Golden Record. […]

While no individual can be said to have invented rock and roll, Chuck Berry comes the closest of any single figure to being the one who put all the essential pieces together. It was his particular genius to graft country & western guitar licks onto a rhythm & blues chassis in his very first single, “Maybellene“.

A pioneer of rock and roll, Berry was a significant influence on the development of both the music and the attitude associated with the rock music lifestyle. With songs such as “Maybellene” (1955), “Roll Over Beethoven” (1956), “Rock and Roll Music” (1957) and “Johnny B. Goode” (1958), Berry refined and developed rhythm and blues into the major elements that made rock and roll distinctive, with lyrics successfully aimed to appeal to the early teenage market by using graphic and humorous descriptions of teen dances, fast cars, high school life, and consumer culture, and utilizing guitar solos and showmanship that would be a major influence on subsequent rock music. Thus Berry, the songwriter, invented rock as a music that gave his teenage listeners dreams of wishes fulfilled and good times. (New York Times, March 19, 2017, p.3) Berry contributed three things to rock music: an irresistible swagger, a focus on the guitar riff as the primary melodic element and an emphasis on songwriting as storytelling. His records are a rich storehouse of the essential lyrical, showmanship and musical components of rock and roll. In addition to the Beatles and the Rolling Stones, a large number of significant popular-music performers have recorded Berry’s songs. Though not technically accomplished, his guitar style is distinctive—he incorporated electronic effects to mimic the sound of bottleneck blues guitarists and drew on the influence of guitar players such as Carl Hogan, and T-Bone Walker to produce a clear and exciting sound that many later guitarists would acknowledge as an influence in their own style. Berry’s showmanship has been influential on other rock guitarists, particularly his one-legged hop routine, and the “duck walk“, which he first used as a child when he walked “stooping with full-bended knees, but with my back and head vertical” under a table to retrieve a ball and his family found it entertaining; he used it when “performing in New York for the first time and some journalist branded it the duck walk.”

The rock critic Robert Christgau considers Berry “the greatest of the rock and rollers“, while John Lennon said, “if you tried to give rock and roll another name, you might call it ‘Chuck Berry’.” Ted Nugent said, “If you don’t know every Chuck Berry lick, you can’t play rock guitar.” Bob Dylan called Berry “the Shakespeare of rock ‘n’ roll“. Springsteen tweeted, “Chuck Berry was rock’s greatest practitioner, guitarist, and the greatest pure rock ‘n’ roll writer who ever lived.”

When asked what caused the explosion of the popularity of rock ‘n roll that took place in the 1950s, with him and a handful of others, mainly him, Berry said, “Well, actually they begin to listen to it, you see, because certain stations played certain music. The music that we, the blacks, played, the cultures were so far apart, we would have to have a play station in order to play it. The cultures begin to come together, and you begin to see one another’s vein of life, then the music came together.”

Among the honors Berry received were the Grammy Lifetime Achievement Award in 1984 and the Kennedy Center Honors in 2000. He was ranked seventh on Time magazine’s 2009 list of the 10 best electric guitar players of all time. On May 14, 2002, Berry was honored as one of the first BMI Icons at the 50th annual BMI Pop Awards. He was presented the award along with BMI affiliates Bo Diddley and Little Richard. In August 2014, Berry was made a laureate of the Polar Music Prize.

The journalist Chuck Klosterman has argued that in 300 years Berry will still be remembered as the rock musician who most closely captured the essence of rock and roll. […]

Sir Paul McCartney has described how the songs of veteran rock’n’roller Chuck Berry “hit us like a bolt of lightning” in a personal tribute to the legendary guitarist.

The former Beatles songwriter has dubbed the 87-year-old as “one of greatest poets America has ever produced” in an introduction to the first release of the guitarist’s complete studio recordings.

“When we first heard them they summed up the freedom of youth with a wit and wisdom unlike anyone else’s writing at the time,” says Sir Paul of Berry.

“We, the Beatles were hugely influenced by his music. Songs like “Sweet Little Sixteen”, “Rock and Roll Music”, “Maybellene” and “Memphis Tennessee” are but a few of the great classics that came flowing from his pen,” adds Sir Paul.

“His guitar playing formed the basis for the styles of so many of us and his request to Beethoven to ‘roll over’ lead a revolution in music that continues to this day.” 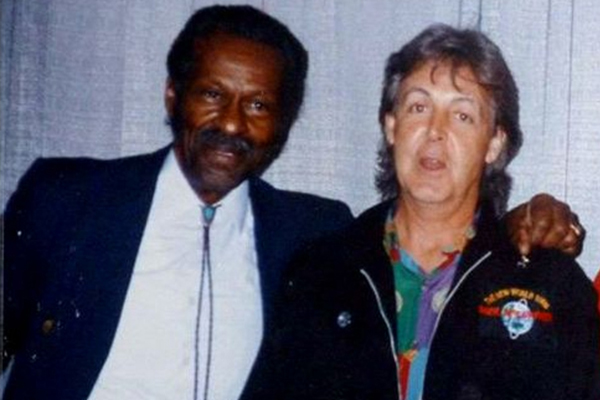 Paul on the passing of Chuck Berry: “Chuck Berry sadly passed away over the weekend. He was one of rock ‘n’ roll’s greatest poets. He will be missed but remembered by everyone who ever loved rock ‘n’ roll.”

“From the first minute we heard the great guitar intro to ‘Sweet Little Sixteen’ we became fans of the great Chuck Berry. His stories were more like poems than lyrics – the likes of ‘Johnny B Goode’ or ‘Maybellene’. To us he was a magician making music that was exotic yet normal at the same time. We learnt so many things from him which led us into a dream world of rock ‘n’ roll music.

“Chuck was and is forever more one of rock ‘n’ roll’s greatest legends all over the world. I was privileged to meet him in his home town St Louis when I played there on tour and it’s a memory I will cherish forever. It’s not really possible to sum up what he meant to all us young guys growing up in Liverpool but I can give it a try.”

I have to ask you about Chuck Berry. Obviously a massive musical hero of yours. What was he like? Did you work with him much?

I didn’t work with Chuck. I met him. He came to one of our concerts when we were playing in St. Louis, his home town, and he came round backstage. It was great to meet him and just be able to tell him what a fan I was.

When I think back to being in Liverpool pre-Beatles, when we were all just kids learning the guitar with the dreams of the future, we suddenly heard this little thing, Sweet Little Sixteen. We never heard anything like that, and then when Johnny B. Goode came along, all of his fantastic songs, Maybellene. All these songs about cars, teenagers, rock ‘n roll music, was just so thrilling.

I Got to Find My Baby

I'm Talking About You

Officially appears on On Air - Live at the BBC Volume 2