Album Songs recorded during this session officially appear on the Free As A Bird EP.

Free As A Bird

From Then To You

The Christmas disc was not recorded until the evening of Tuesday November 28, a few days before Ringo went to Rome for “Candy” filming. John brought along the handwritten script he and the others had worked out earlier the same day. The first job was to record the theme song before going on to the bits of dialogue.

John got hold of a pair of tympani drums and put his coat across the top to muffle the sound. Paul sat down at the piano, George got his guitar ready and Ringo set up his own drum kit because Mal had nipped off down the road to take a mate for a pint!

Everyone joined in to sing the chorus — not just four Beatles but everyone who happened to be around including producer George Martin and actor Victor Spinetti who had dropped in for a chat!

Now it isn’t usual to have dance routines on a record but The Beatles decided it would be a nice touch. Instead of using a sound-effects record Ringo and Victor gave us all a “live performance” tap display specially for the recording!

After all the “talking” bits had been put on tape Paul and George had to leave but John stayed on to supervise the job of piecing together all the recorded bits. That took them until nearly three in the morning — with John deciding at the last moment to add the Poetic Scotsman sequence (George Martin playing “Auld Lang Syne” on the organ behind him) as a bonus for all North O’ The Border Beatle People!!!

The colourful sleeve for “CHRISTMAS TIME (IS HERE AGAIN)” was designed by John, Julian and Ringo the following afternoon at John’s house. Julian got stuck in with his oil-painting set to produce the bright colours for the back while John and Ringo cut up dozens of ancient photographs for the front. If you count ’em up you’ll find about 161 people on the front of the sleeve — plus one or two unfortunate folk who lost their heads! Where did all those pictures come from? No, they’re NOT family album snaps of 19th century Lennon relatives! They were taken from the bundle of very old photo albums John has amongst his incredible collection of antique-type books.

The third book of this critically - acclaimed series, nominated for the 2019 Association for Recorded Sound Collections (ARSC) award for Excellence In Historical Recorded Sound, "The Beatles Recording Reference Manual: Volume 3: Sgt. Pepper's Lonely Hearts Club Band through Magical Mystery Tour (late 1966-1967)" captures the band's most innovative era in its entirety. From the first take to the final remix, discover the making of the greatest recordings of all time. Through extensive, fully-documented research, these books fill an important gap left by all other Beatles books published to date and provide a unique view into the recordings of the world's most successful pop music act. 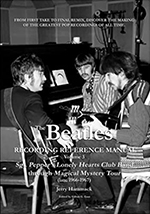