Timeline This song has been officially released in 1999

Be Bop A Lula

“Blue Jean Bop” is the opening title of the eponym & debut album of Gene Vincent and His Blue Caps, released in 1956 on the Capitol label.

From the liner notes of “Run Devil Run“:

First released in 1956 by Gene Vincent. “I remember hearing Blue Jean Bop on an album that I think John had; going to a place near Penny Lane for the afternoon, having a ciggy, and just listening to records. Blue Jean Bop was always one of my favourites. The first record I ever bought was Be Bop-A-Lula. We loved Gene.”

From an interview with Laura Gross (promotional interview for “Run Devil Run” in 1999):

Paul McCartney: […] There were a couple of songs that, really, I just wanted to kind of be faithful to the originals. Just ’cause the memory was just so clear. Blue Jean Bop was off an album that we had in Liverpool of Gene Vincent’s with the big hit was Be-Bop-A-Lula. Blue Jean Bop wasn’t quite such a big hit but it was one we loved. And it’s got this nice intro which, you know, Bluejean baby with your big blue eyes. Duh, duh, duh, duhoah. I can’t keep still so baby let’s dance. Well, the blue, and then it goes like a lot of rock ‘n’ roll songs just do that, you know. And it’s got this echo wah, wah, wah, really poppin’. And in actual fact, having done a bit of that in the week, I realized that they actually used to write for the echo. Well it’s the bop, bop, bop, that’s bop, delay echo. That ?…?. So, if you go, lovely day today, all languid things, it doesn’t work. You’ve got to pop the echo, you know, I’m a poppin’ you, beat, bop, boppin’ you, baby bop. So you realize that’s why all the songs were written like that, you know. So it’s great just sort of rediscovering all this stuff kind of new. And on Blue Jean Bop I thought, no, I just want that echo, over the top echo sound. So we used it there. But on a lot of the other songs. There’s kind of a more modern sound on them. But the songs themselves are like old fashioned. We just, you know, messed them around. I mean, I love the lyrics of this album. They’re really nice. Blue Jean Bop’s got, you know, I can’t keep still so baby let’s dance. Dip your hip, free your knee, you know. I like this stuff, it’s kind of good, good words, I think. Some of them are really brilliant, clever lyrics.

Bluejean baby, with your big blue eyes
Don`t want you looking at other guys
Got to make you give me, one more chance
I can`t keep still, so baby let`s dance

Concert From "Live At The Cavern" in Liverpool, United Kingdom on Dec 14, 1999 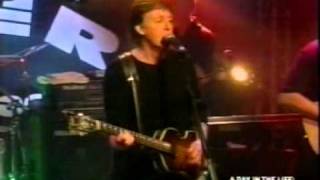 “Blue Jean Bop” has been played in 1 concerts.

Latest concerts where Blue Jean Bop has been played

Live At The Cavern