Album This song officially appears on the Ferry Cross The Mersey 7" Single.

Feet in the Clouds

“Ferry Cross the Mersey” (sometimes written Ferry ‘Cross the Mersey) is a song written by Gerry Marsden. It was first recorded by his band Gerry and the Pacemakers and released in late 1964 in the UK and in 1965 in the United States. It was a hit on both sides of the Atlantic, reaching number six in the United States and number eight in the UK. The song is from the film of the same name and was released on its soundtrack album. In the mid-1990s a musical theatre production also titled Ferry Cross the Mersey related Gerry Marsden’s Merseybeat days; it premiered in Liverpool and played in the UK, Australia, and Canada.

“Mersey” refers to the River Mersey in northwest England, a river that flows into the Irish Sea at Liverpool.

The song is often misspelled as “Ferry ‘Cross the Mersey”, but according to the song’s lyrics, the track is correctly titled “Ferry Cross the Mersey”. “Cross” is not a contraction of the preposition “across” but rather an imperative verb – “Ferry, cross the Mersey.” The Mersey Ferry runs between Liverpool and Birkenhead and Seacombe on the Wirral.

In May 1989, a charity version of “Ferry Cross the Mersey” was released in aid of those affected by the Hillsborough disaster, which claimed the lives of 95 Liverpool fans the previous month (a 96th, Tony Bland, died in 1993 as a consequence of that disaster). The song was recorded by Liverpool artists The Christians, Holly Johnson, Paul McCartney, Gerry Marsden and Stock Aitken Waterman. The single held the #1 spot in the UK chart for three weeks and the Irish chart for two weeks.

From The Paul McCartney Encyclopedia, by Bill Harry:

[…] For the ‘Mersey Aid/Hillsborough Fund’, Gerry approached Pete Waterman of the hit production team Stock, Aitken and Waterman, who agreed on Gerry’s choice of the number ‘Ferry ‘Cross The Mersey’. Paul McCartney, Holly Johnson of Frankie Goes to Hollywood and another Liverpool band, the Christians, were approached to participate in the recording.

Gerry recorded his part first and Paul and the Christians went in the studios together. Holly Johnson was in Germany at the time and recorded his vocals after the others had all finished. Waterman had to explain to Gerry that their recording technique was different from what he had in mind. He was to comment, ‘He (Gerry) wrote it as a pop song. When we produced it with four artists, we did it as a tribute, which changed the whole meaning of why the song was being recorded. Gerry had recorded it with George Martin as a hit; we were now recording it with Paul McCartney and everybody else to raise money for a charity. We were creating an emotional message to wrench money out of people’s pockets. Our job was to make money for an appeal and for that we had to be mercenary.’

In the middle of the record, Paul lets out a wail. Waterman commented, ‘He goes out of tune and he wanted me to take it off and do it again and I wouldn’t let him. I said, “Why did you do it?” and he said, “Well, it’s just how I felt.” And I said, “Then it stays!” Linda McCartney called me up afterwards and said, “You know, you’re probably the only person who’s ever told Paul McCartney that he couldn’t have his own way. But all of us down here think you’re absolutely right; we think it’s marvellous to hear him showing some emotion.'”

Waterman made some additional comments. ‘He [Paul] wanted to make it perfect which, of course, because he’s Paul McCartney, he would do. But we knew the song had got to him at that point, the emotion of the tragedy had got to him, and when you see the video it definitely gets your throat, catches you and gives you a tear in the eye. McCartney did capture the spirit of it – and that’s down to the fact that Gerry wrote a great song that does stand up to that treatment.’

Gerry Marsden was to comment, ‘It was fun to think that Paul McCartney had returned, with me, to the top of the charts with a Marsden composition.’

Life goes on day after day
Hearts torn in every way

So I'll continue to say
Here I always will stay 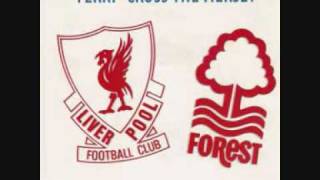 In the lyrics you use ‘cross although you state emphatically that the lyrics are simply: cross the Mersey.