Overdubs for "Hope Of Deliverance"

“Hope of Deliverance” is a song from 1993 album Off the Ground, released as a single in anticipation of the album in December 1992. From Wikipedia:

It became a hit in his native UK, reaching number 18. It did not fare well on the Billboard Hot 100, peaking at number 83, but did better on the Billboard Adult Contemporary chart, hitting number 9. It also did very well in Germany, reaching number 3 there, and is still gaining a lot of airplay in Central and Eastern European radios as well as in South America. Remix versions were released on 15 January 1993, and picked up massive airplay in clubs.It was number one on European top 20 “1993/02/13”. The song went on to become the 11th biggest worldwide hit of 1993. […]

The song was featured in the set list of 1993’s The New World Tour. It was in hiatus until McCartney performed it again in Bogotá, Colombia on 19 April 2012 during his On the Run Tour—the first time performing a song from Off the Ground with his 2012 lineup. During the Out There Tour, McCartney performed “Hope of Deliverance” with all musicians in his band playing guitar, including the tour opener in Belo Horizonte. […]

I went up into the attic of our house, just to get away from everyone. There’s a trap door, you go up a little ladder and then close it and no one can get at you, so then you know you’ve got a couple of hours to yourself. So I went up into the attic and took with me a Martin 12-string guitar and, just for a bit of fun, I put a capo on it – the little bar that comes half way up the strings and changes the length of the guitar neck. On a 12-string it makes for a very jingly sound, which reminds me of Cathedrals and Christmas. So that led me into the field of hope, of deliverance, and then I added about the darkness that surrounds us. You know, if you’re involved in rescuing people in Somalia then that’s the deliverance – you want to get out of there safely, if you are involved in poverty then that’s your deliverance, to get out of that trap. Homelessness, disease, whatever, big or little, we’ve all got them. So that was it really, it just became a kind of optimistic song, either to, perhaps, a girlfriend, or to a God-figure. I do like leaving things ambiguous – I’ve often done that in my songs, so that people say to me “I always thought it meant something else…”.

Paul Wix Wickens: Hope Of Deliverance was a track that Paul and Robbie got together, really. They’d been working on it with acoustic guitars and so when the rest of us came to hear it there was this wall of guitars. On stage, because they have a lead break in harmony, to my surprise and delight I have a starring role on acoustic. I’m mad keen on any instrument. I used to be a drummer from the age dot and then I played guitar in folk clubs, C, G, D7, A minor and bluff the rest.

Blair Cunningham: Hope Of Deliverance was a try-this, try-that track until one sunny day I said, It sounds Caribbean, calypsoey, out on the beach. Paul could hear that so it happened. There’s a beatbox on it, but apart from that, I play drums acoustically, not through machines. It’s all right on record, but how will it work live?

I want to see more bands out there, not someone miming to a computer programme. A lot of people tried to get me into the electronic business, That’s where the money is, man! No, I say, that sounds session to me. I want to be in a band. That’s where I feel safe.

Paul McCartney: I’ve noticed that with a lot of the songs what’s coming through is me saying something like don’t go down under the prevailing despair and gloom, you know, the (moans) Woooo-aaa. It’s a sort of, Don’t bottle out, we can do it!

Three Latin percussionists were involved on this track, during an overdub session which took place on July 17, 1992. One of those, Maurizio Ravalico, has detailed this session in the book Paul McCartney: Recording Sessions (1969-2013):

We were invited to McCartney’s private studio in Sussex. They had us to hear the track, that was already completed and mixed, giving some generic instructions. We only learned that they wanted a Latin flavor on the song and so we brought to the studio an entire instruments’ van! […] We were in the studio for half a day. Everything went smoothly and quickly, but without any pressure. Both McCartney and Mendelsohn were wide-open to our suggestions and they did not give any indication about our instruments or the playing style […]

A promotional video for “Hope Of Deliverance“ was shot in Ashdown Forest and in Black Island Studios (North London), late November 1992, directed by Andy Morahan. Two edits of the video were prepared – the “stone cross edit” and the “version with stone”.

"Hope Of Deliverance" is one of the 154 songs covered. 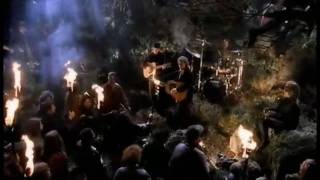 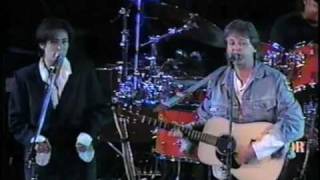 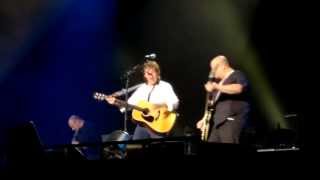 “Hope Of Deliverance” has been played in 93 concerts and 20 soundchecks.

Latest concerts where Hope Of Deliverance has been played

See all concerts where “Hope Of Deliverance” has been played