Album This song officially appears on the I Don't Know / Come On To Me Streaming.

“I Don’t Know” is a song written by Paul McCartney, and released alongside “Come On To Me” as a Double-A single in June 2018, ahead of the release of McCartney’s 2018 “Egypt Station” album. From the press release:

I wrote this after going through a difficult period. Like people have nothing sort of madly serious or anything, but just one of those days when it’s like, “Oh my god, am I doing wrong here”, you know. And sometimes that’s a good way to write a song, because you’re coming from your soul. And we often used to say that writing a song was like talking to a psychiatrist, a therapist or something. Because you’re saying it… You are saying it in a song rather than in a room to a specialist. Yeah, so it was me just thinking this problem out, and putting it into a song.

Crows at the window, dogs at your door – what’s going on there?

That’s a grown-up song. Sometimes in your life, you’re not a god on Olympus. You’re a real person walking round the streets. I’m a grandfather, a father, a husband, and in that package there’s no guarantee that every minute’s gonna go right. In fact, quite the opposite. And there was a private occasion – I’m not gonna get into it – that brought me down. “God, what am I doing wrong?” I’m not knocking it, I have a great life. But from time to time, reality intrudes. This was one of those occasions where it was like, “Oh, fuck me…” The only thing I would do was sit down at the piano. “Got crows at the window! Dogs at ma door!” It all spilled out in that song.

So it’s a piano ballad in the blues tradition?

Well exactly, it really is. “Ma woman left me!” It wasn’t that, but it was that sort of feeling. I didn’t really know what to do about it, other than write a song. So I wrote the song and then felt I had more of an idea what to do. You write out your demons. It felt good to just say, “I don’t know what to do!” It’s like owning up.

I got crows at my window
Dogs at my door
I don't think I can take any more
What am I doing wrong, I don't know

My brother told me
Life's not a pain
That was right when it started to rain
Where am I going wrong, I don't know

But it's alright, sleep tight
I will take the strain
You're fine, love of mine
You will feel no pain

Well, I see trouble
at every turn
I've got so many lessons to learn
What am I doing wrong, I don't know

Now what's the matter with me
Am I right, am I wrong
Now I've started to see
I must try to be strong

I tried to love you
Best as I can
But you know that I'm only a man
Why am I going wrong, I don't know

But it's alright, sleep tight
I will take the strain
Yeah, you're fine, little love of mine
You will feel no pain

I got crows at my window
Dogs at my door
I don't think I can take any more
What am I doing wrong, I don't know

A Original version
A1 Radio Edit

I Don't Know / Come On To Me (RSD exclusive)

Concert From the concert in Liverpool, United Kingdom on Dec 12, 2018 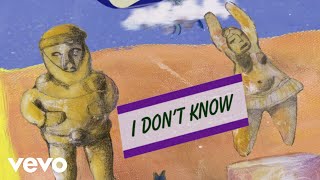 “I Don't Know” has been played in 8 soundchecks.

Hi Mathew, thanks very much for this - I have made the changes !

Who's the female backup singer?

Hi Joanie, there is none female backup singer credited - but Greg Kurstin is credited for "backing vocal arrangement".

Fuh You! 4 years ago

"I Don't Know" was played in soundcheck for one of the Tokyo shows... https://www.youtube.com/watch?v=LCNCic5CgM0&fbclid=IwAR09LiywWLmNkxL0ArvW56JtDD7Im9pF6jFFtfYkqfPkdFKVO5yU30e5iuY

Oh thank you @fuh you ! Didn't notice that !

He did this in soundcheck if I recall correctly.