Lend Me Your Comb

“Let ‘Em In” is a song by Wings from their 1976 album Wings at the Speed of Sound. It was written and sung by Paul McCartney and reached the top 3 in the United Kingdom, the United States and Canada. It was a #2 hit in the UK, and in the US it was a number 3 pop hit and number 1 easy listening hit. In Canada, the song was #3 for three weeks on the pop chart and #1 for three weeks on the MOR chart of RPM magazine. The single was certified Gold by the Recording Industry Association of America for sales of over one million copies. […] The song is noted for the sound of a doorbell, chiming the first eight notes from the Big Ben tune, before the rhythm begins. Phil and Don Everly, both brothers from the Everly Brothers, are named on the group of seven people who are to be admitted into the house. (“PHIL AND DON”) Martin Luther is also mentioned as well. The others include Sister Susie, Brother John, Brother Michael, Uncle Ernie, and Auntie Gin. The song is noted for the false fade out, which, however, becomes loud for the last two notes of the song as it ends. The song makes use of the piano, drums, brass, including a trombone solo, and wind instruments, featuring flutes, plus backup vocals from Linda and the other members of the group Wings.

The song was released worldwide as a 7″ single, except in France where it was released as 12″ single (the first ever McCartney 12″) with both sides labeled “Special Disco Mix“. In fact these were just normal album versions of the songs.

Paul McCartney “shouted out” to several of his relatives and friends in this song: his aunt (“Auntie Gin”) and brother (“Brother Michael”), the Everly Brothers (“Phil and Don”), Keith Moon (“Uncle Ernie”) and Linda’s brother (“Brother John”). His reference to “Sister Suzie” was a reference to Linda, who once recorded a song under the name “Suzie And The Red Stripes.”

It sort of said: let’s have a party, why keep ’em outside? So in listing the kind of people who might be outside the door, I just naturally went to… Auntie Gin, brother Michael – they all exist – Phil and Don being the Everlys. I just wanted a parade of people that we could imagine outside the door, so I drew on all the people I knew.

Let 'Em In / Beware My Love 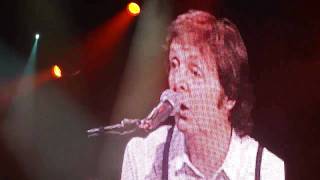 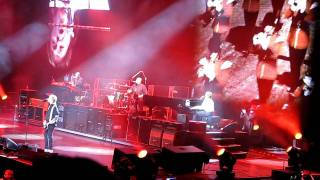 Latest concerts where Let 'Em In has been played

See all concerts where “Let 'Em In” has been played

The opening chord always strikes me as a little flat - it's preceded by Westminster chimes. The last night there was a show about Westminster & they explained that due to a crack in the largest bell in the Big Ben tower, the 'hour chime' there is flat. Just wondering if this is coincidence or if Paul is basing that opening chord on the Big Ben flat note?

Thanks Paul for this insightful comment - I think it will be hard to validate this assumption, but that's a tempting one ! Thanks again

Actually no. "Brother John" refers to his wife Linda's brother John and not John Lennon. At least that's what it says on wikipedia and I belive it to be accurate in this case since I don't think Paul had "made up" with John Lennon at that point.

Thanks Mike - you're right ! Fixing it !

Hello! There is a single version released in Japan which is shorter, partly because it omits the coda and the final notes, after the fade-out section. You can check it here: https://www.discogs.com/es/release/6281317-Wings-Let-Em-In