Love Song To The Earth

Album This song officially appears on the Love Song to the Earth Single.

Love Of The Loved

Paul McCartney has teamed up with a host of famous musicians to record a song dedicated to taking action to save the world.

Love Song to the Earth, which is released today on iTunes and Apple Music via Connect, is intended to push environmental matters to the forefront of the public’s mind in advance of important climate change talks taking place later this year.

Hopes are high that a meaningful deal will be inked at the COP21 conference in Paris in November and December, when world leaders will meet to discuss responses to the challenges confronting the planet.

The Love Song to the Earth project aims to bring climate change to the attention of a new audience and inspire people across the world to encourage their leaders to take action.

One simple, healthy step we can all take is to cut back on the amount of meat we eat – which is why the founder of Meat Free Monday is the perfect addition to the star-studded line-up.

Listeners will be asked to sign a petition that will be delivered to political leaders at the start of the climate conference.

The track will be available for a week on iTunes and Apple Music, before being released on other music distribution and streaming services around the world next Friday.

All proceeds from Love Song to the Earth will go towards environmental group Friends of the Earth and the United Nations Foundation. The artists, producers and directors taking part will also donate their fees.

“The climate crisis is near a global tipping point,” said Erich Pica, president of Friends of the Earth US. “We hope everyone who hears this anthem takes action to encourage our political leaders to keep our planet safe, by keeping fossil fuels in the ground and moving toward 100 per cent renewable energy.”

In words that will chime with MFMers already used to taking responsibility for their carbon footprints and leading by example, Pica added: “The time for leadership and action is now; if our political leaders cannot or will not lead, then a people’s movement must.”

I’m glad to be a part of ‘Love Song to the Earth,’ aiming to inspire people across the world to urge their leaders to act on climate change. We need to be fast and efficient, switching to renewable energy and eating less meat, for example. Big decisions will be made this week, so I am doing everything I can to make sure governments sign up to an agreement, which can protect our planet. Now is the time to act. So please spread the woes and help keep our planet safe!

It's not about possessions, money, or religion
How many years we might live ?
When the only real question that matters is still
A matter of perspective
Looking down from up on the moon
You’re a tiny blue marble
Who’d have thought the ground we stand on
Could be so fragile

[BRIDGE Sean Paul Rap]
Bang Bang Bang
See Mama earth is in a crazy mess
It's time for us to do our best
From deep sea straight up to Everest
She under crazy stress
unless you wanna be motherless
Clean heart, Green Heart
is the way,
is stress
Speedniess and too much Greediness
Six billion people all want plentiness
Some people think this is harmless
( It's our world, It's our world)
But if we continue their'll
only be emptiness

Love Song to the Earth

Love Song to the Earth 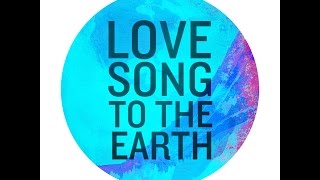 Album • Love Song to the Earth