Album This song officially appears on the Wild Life LP.

You Gave Me The Answer - 'Wild Life' Special

McCartney: I know I'm good. If I'm in the right mood I can write a solid gold hit

And while you’ve been sitting here remastering the album, are there songs that you’d forgotten about?

Yeah, absolutely! Well, to tell you the truth, I don’t listen to my old albums much, you know. I just don’t. So, I mean, to me it’s very strange that I would dare to do a track like ‘Mumbo’. To open an album with a track that hasn’t got any lyrics! It’s like, ‘Whoah!’ I mean, I think it’s kind of cool now. Like, ‘Wow, okay…!’

It’s a very spontaneous way of making music – just getting in a room and playing.

Yeah. And, you know, this was following The Beatles. I’m not trying very hard, you know! [Jokingly sings the opening line of ‘Mumbo’, ‘Welllllllllllllllll….!!!’]

[…] I mentioned earlier about ‘Mumbo’ being quite experimental, especially to finish off the record with the shorter “link” version. I think that song came from, you know, the band would just get an idea of a chord, or something. We’d just jam on it. And, it would be just, ‘Okay, this is in F’, or whatever key it’s in. And we’d just play. And I’d sort of shout stuff over the top. It’s all part of becoming a band. You know, you learn that I’m gonna be goofy and sing some goofy things, and you – for example – as the drummer have got to come along with it and do your own thing. And Denny Seiwell, I think, is really brilliant on all this stuff.

Mumbo is just a big scream of no words. A wacky idea, cos it was just ‘Whuurrrgghh A-hurrgghhh!’ and we mixed it back so it was like ‘Louie Louie’. Everyone’s going, What are the words of that? Just hope they don’t ask for the sheet music. Which no one ever did, luckily.

From Eight Arms to Hold You: The Solo Beatles Compendium, by Chip Madinger & Mark Easter:

The LP lurched to a start with a performance of an instrumental track that had been going on for several minutes before Paul instructed engineer Tony Clark to “take it” and roll tape. Hard to believe it, but this was a one-take song! Not an auspicious beginning for one of the biggest bands of the ’70’s. The improvisation was recorded on July 26th and received sundry overdubs (including a plastic tube) before it was mixed on October 10th. 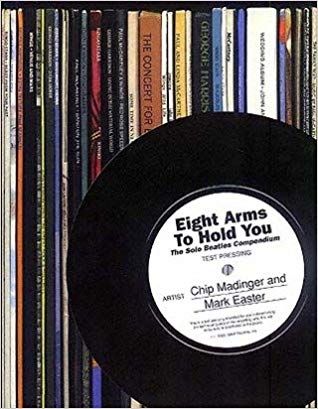 Eight Arms to Hold You: The Solo Beatles Compendium

At the beginning of the cut, you can hear me say, ‘Take it, Tony.’ We had been going for five minutes and then I suddenly realised that he wasn’t recording. So I shouted, ‘Take it, Tony,’ and he just got it in then.

We recorded that album very quickly. It was almost like a bootleg, which may be a shame and perhaps some of the songs aren’t as good as they might be. We did Mumbo on the tour and somebody said after we’d done it for a bit that it made the album version seem obsolete. On the album it wasn’t even the first take, we were playing it through and Paul shouted to the others ‘it’s in F’ and in fact on the beginning you can hear him shout ‘take it Tony’ to the engineer.

l wanted the whole album to be loose and free so that everyone could get into it. Things like ‘Mumbo’ which scream a bit and have only ‘Mumbo’ as lyrics may offend a few old ladies, but generally it’s got something for everyone.

There was a period of rehearsal of this jam. Because there was no actual producer in the box, I would spend as much time as I could in the studio, making sure my mics were in the right place and everyone was comfortable, that there was proper visual contact. Then I returned upstairs for listening. They were jamming, it was building up and, for whatever reason, whether I looked at Paul or Paul looked at me, you felt it was happening. I turned to Alan [Parsons]; ‘Quick, record!’ Parsons hit the button and that’s what you get. That’s the take.

Concert From the concert in Antwerp, Belgium on Aug 22, 1972

Concert From the concert in Rotterdam, Netherlands on Aug 17, 1972

Concert From the concert in Amsterdam, Netherlands on Aug 20, 1972

“Mumbo” has been played in 17 concerts.

Latest concerts where Mumbo has been played

See all concerts where “Mumbo” has been played

Interesting that the version on Wings Over Europe has lyrics and it makes the song quite good, actually. I remember when Wild Life came out back in 1971 and I didn’t like either that song or most of the album. Hearing it with lyrics redeems it and it comes across great live. Can’t help but think of the way we saw Get Back come to life in Peter Jackson’s masterpiece. It starts with Paul’s great bass riff, then the Get Back refrain but there aren’t any verses on the song’s “birthday” of January 7, 1969. Those came later. So Mumbo is best called Mumble, at least the studio version, as Paul just let it go at that.
PS. Not saying Mumbo is better than Get Back. It isn’t.