Once Upon A Long Ago

Album This song officially appears on the All The Best! (UK version) Official album.

Timeline This song has been officially released in 1987

Recording "Once Upon A Long Ago"

Recording "Once Upon A Long Ago"

Overdubbing "Once Upon A Long Ago"

Other songs produced by Phil Ramone

I’ve done some recording with Phil Ramone recently and this was something that came out of those sessions that we liked. The sentiment is ‘times remembered’: once upon a long ago…things were so much simpler then…It’s got some nice bits in it, I think it’s quite a haunting thing. I feel quite good about it.

“Once Upon a Long Ago” is a Paul McCartney song, released as his fortieth single on 16 November 1987, as part of his compilation All the Best!, released two weeks before the single. The track was produced by Phil Ramone and mixed by George Martin, and features violin by Nigel Kennedy.

It was reported in a 2011 biography that the origin of this song is with the film The Princess Bride. McCartney was approached by Director Rob Reiner to compose a couple of songs and the incidental music for the film. Reiner rejected as “too sentimental” the two songs Paul submitted: “Once Upon a Long Ago” and “Beautiful Night” and contracted with Mark Knopfler to complete the soundtrack.

Originally it was intended that this song would be a Duet between McCartney and Freddie Mercury. The two had become friends following Live Aid and McCartney wrote the song with Mercury in mind. Mercury however was inundated with work, both Solo and with Queen and was also in the advanced stages of AIDS and McCartney very understandably allowed Mercury to depart from the project .The track was recorded at Hog Hill Studio on March 11 and 12, 1987 with overdubs added in Abbey Road in July. During this session, a full orchestra was overdubbed as well as instrumental contributions by Stan Sulzmann (sax), Nigel Kennedy (violin), and Adrian Brett (flute).

The song was released in four versions. Two different 12″ singles feature “long” and “extended” versions (mixed by George Martin and Peter Henderson, respectively); the 7″ single and the CD single (McCartney’s first) features an edit of the long version and a b-side from each the two 12″ singles, as well as “Back on My Feet“, a b-side for all four iterations; and the album version featured on All the Best! contains an alternate ending. “Back on My Feet” was also the first released song from the songwriting collaboration between McCartney and Elvis Costello. Both 12″ and CD singles also featured songs from yet to be released McCartney’s cover album Choba B CCCP.

“Once Upon a Long Ago” reached number ten in the United Kingdom Singles Chart, McCartney’s last Top 10 in his homeland until the release of “FourFiveSeconds” in 2015. The single was not released in the United States nor included on the US version of All the Best!, although it did appear on the longer UK/Canada version. The song has remained unavailable on any US released album, although it is a bonus track on the 1993 UK remastered version of Press to Play – the 1993 remastered Paul McCartney Collection has never been released in the US.

Once Upon A Video

Along with the single and the All the Best!-album there was also released an 18-minute VHS for sale called Once Upon A Video, consisting of four music videoes:

We All Stand Together was included on the UK/Canada-release of All the Best! along with Once Upon A Long Ago.

Paul had heard me on a record I made playing Duke Ellington and Bartok. Apparently he asked George Martin if I was available …It was great fun to do. Paul’s contribution to music has been phenomenal, but he’s still got the appetite… It’s just art for art’s sake.

Nigel Kennedy, about his contribution to “Once Upon Along Ago”, from Club Sandwich N°46, Winter 1987

It was quite a laugh. We recorded at Abbey Road and I’d just been in there the day before doing some concerto with Andre Previn… With Previn, we already knew what we were going to do when we went in there. But with McCartney he just said ‘Play’ and it was up to me to lock into his personality and what he was saying

Nigel Kennedy, about the session for “Once Upon Along Ago”, from Club Sandwich N°46, Winter 1987

Picking up scales and broken chords
Puppy dog tails in the House of Lords
Tell me darling, what can it mean?

Making up moons in a minor key
What have those tunes got to do with me?
Tell me darling, where have you been?

Once upon a long ago
Children searched for treasure
Nature's plan went hand in hand with pleasure.
Such pleasure.

Blowing balloons on a windy day
Desolate dunes with a lot to say
Tell me darling, what have you seen?

Once upon a long ago
Children searched for treasure
Nature's plan went hand in hand with pleasure.
My pleasure.

Playing guitars on an empty stage
Counting the bars of an iron cage
Tell me darling, what can it mean?

Once Upon A Long Ago / Back On My Feet

Back To The Big Egg

See all bootlegs containing “Once Upon A Long Ago”

Once Upon a Long Ago 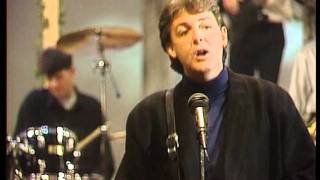 “Once Upon A Long Ago” has been played in 8 concerts.

Latest concerts where Once Upon A Long Ago has been played

The information that Paul originally intended to do this song with Freddie Mercury is fascinating, but I have to ask: Is there a reliable source for this? While the general idea seems plausible, there's at least one detail that is almost certainly wrong, namely the part about Mercury being "in the advanced stages of AIDS" and this being one of the reasons Paul "allowed him to depart from the project". Mercury was only first diagnosed with HIV in 1987, and according to Jim Hutton he only told his Queen bandmates around the time The Miracle was released in May 1989, though they had guessed earlier, and he had already started to show signs of AIDS. However, he certainly did not have advanced AIDS in 1987, and given that he hadn't even told the guys in Queen about his diagnosis yet, it is extremely unlikely that he would have told Paul.

Hi Eric, you are right ; since I had quoted Wikipedia, the content has changed - it is now stated:

"Originally it was intended that this song would be a duet between McCartney and Freddie Mercury. The two had known each other only casually: Mercury was a fan of Buddy Holly and would occasionally attend McCartney's Holly inspired events over the years. However, they became friends properly following socializing that took place after Live Aid. McCartney (who had a lot of sympathy for Mercury due to the press stalking him for stories about his health) wrote the song with Mercury in mind. Mercury however was inundated with work, both solo and with Queen, and McCartney continued the project without him."

So the mention regarding AIDS has disappeared.

When I only quote Wikipedia, that means I haven't done proper research for the song - Will try to do so, in the coming days (rainy weekend announced where I live)