Album This song officially appears on the Flowers In The Dirt - Archive Collection Official album.

Timeline This song has been officially released in 2017

Recording demos of "Twenty Fine Fingers", "So Like Candy", "Playboy To A Man"

Other McCartney / Costello songs released on 2017 Flowers In The Dirt

Officially appears on Flowers In The Dirt - Archive Collection

Officially appears on Flowers In The Dirt - Archive Collection

“Twenty Fine Fingers” is one of the three songs (the other ones being “Tommy’s Coming Home” and “I Don’t Want To Confess“) written by McCartney and Costello that haven’t been officially released until 2017, and their appearance on the Flower In The Dirt reissue. The original demo first appeared in 1998 on the bootleg The McCartney – MacManus Collaboration, but was then mistitled as “Twenty-Five Fingers” (the real title was finally revealed in April 2013 when the song was registered in the U.S. Copyright Office).

According to Elvis Costello, in his autobiography “Unfaithful Music & Disappearing Ink“, “Twenty Fine Fingers” was written on the same day as “Pad, Paws And Claws“:

Paul now called for some more writing sessions, spread over a few days. This would mean having to stay overnight near the studio. I didn’t much venture out into the countryside in those days. When we’d mixed Punch the Clock outside of London, I’d asked a local cabdriver what people did for fun in the nearby village and he’d replied, “Oh, it’s all wife-swapping and witchcraft around here.”

I’ d always suspected as much.

But this wasn’t going to be like 1977, when I had to kip on a broken sofa in Clover’s rat-infested rehearsal room. I was sleeping in a nice feather bed in the Richard Burton and Elizabeth Taylor Suite of a quaint local inn. I don’t know what legend was attached to the name on the door of the room, but it was just big enough for a four-poster bed and an ice bucket.

On my first night there, I walked into the bar for a glass of tonic and bitters. A sightless, slumbering dog, wheezing by the fire, caught the scent of my wretched soul and began barking and snarling at me. It then hauled itself up on all fours with considerable effort.

At which the Pew-like Alsatian reared up on its hind legs, pinning me against the flocked wallpaper with its fore paws. The grey film of cataracts obscured its eyes, but its slobbering muzzle seemed to be working fine, and the dog seemed determined to locate my neck in order to sink in a fang.

“Ah, he’s just playing with you, the silly old sod,” the landlord declared as he balled up a beer-soaked tap cloth and aimed it at the beast.

The next day we wrote “Pads, Paws and Claws” – which took its title from a children’s book about big cats that I’d found in a junk shop, rather than immortalizing my encounter with the hellhound of Rye – then we dashed off a little rock and roll tune called “Twenty Fine Fingers.”

We were now working on two or three songs a day. Whenever Paul and I completed a number, we’d go downstairs to the recording studio on the ground floor and cut a demo with just two guitars or the piano.

They remain the most vivid and uncluttered versions of our songs. 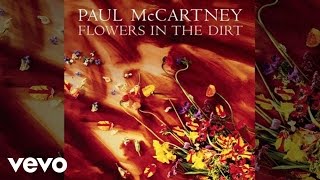